Over the years, Illinois’ poorly funded retirement systems have put an enormous strain on the State’s budget. At times, the State has chosen to simply avoid the burden by making smaller contributions to the pension funds than required under a 1995 pension funding law.

As part of the $54 billion FY2010 operating budget passed on July 15, 2009, the General Assembly and Governor chose to make the full pension payment of $4.5 billion required by law. However, the method the State has chosen for funding most of the contribution—by borrowing $3.5 billion through the sale of short-term pension obligation notes to be paid off in five years—will make it even harder to balance the budget in years to come. The debt service and principal for these notes is estimated to cost the State an additional $800 million per year.

Governor Quinn had initially proposed to take a partial pension holiday in FY2010 but also to enact historic pension reforms and to increase income taxes. None of these proposals were accepted by state lawmakers, and the pension borrowing was approved to prevent drastic cuts in state operations that would have resulted from using operating funds to make the pension payments.

As shown in the table below, the State will only have to pay about $1.1 billion from regular (non-borrowed) operating funds for pension costs for FY2010, which ends on June 30, 2010. This payment consists of $544 million in borrowing costs relating to a pension obligation bond issued in 2003 and $580 million in contributions to the state’s five retirement systems. The rest of the required payment in FY2010 will come from proceeds of sale of the $3.5 billion in pension obligation notes.

However, the State’s pension payments out of regular operating funds are expected to rise steeply in FY2011—to almost $5.6 billion. This includes the required contribution of $4.2 billion, debt service of $542 million on the 2003 bonds and estimated borrowing costs of $800 million for the 2010 notes. The borrowing costs associated with the notes could change once the sale of the notes is completed, and some interest payments may be made in FY2010. The following graph shows an estimate of the new annual pension payment compared to the annual cost prior to the new pension borrowing: 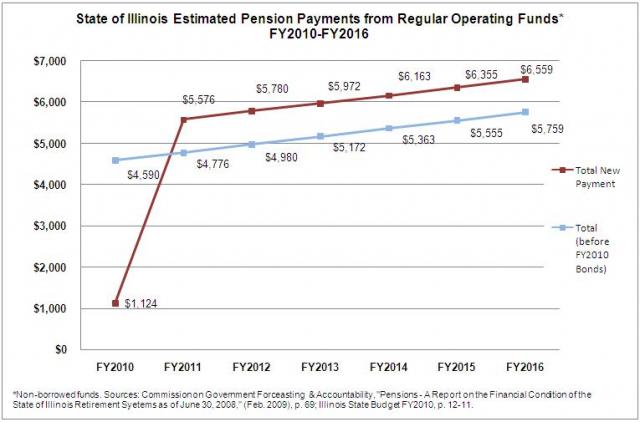 The required pension payments above are projections made in February 2009 by the Commission on Government Forecasting and Accountability, based partly on investment returns. Actual required contributions could be higher, depending on investment results. An unaudited estimate of the pension funds’ financial condition as of December 31, 2008, showed a combined funded ratio of 40% and unfunded liabilities of $73.4 billion.

On July 16, a day after Illinois approved its new budget, Moody’s Investment Service said it was considering downgrading the State’s credit rating. The rating agency said its review will focus on Illinois’ prospects for “restoring structurally balanced financial operations while addressing sizable funding requirements for pensions and retiree health benefits, as well as the state’s liquidity position and growing debt burden.”