No Budget Deal in Sight as General Assembly Session Ends

The Illinois General Assembly ended its regular session on May 31, 2017 without passing a budget, heightening concerns that the State might move into a third year without a complete financial plan.

Standard & Poor’s and Moody’s Investors Service immediately lowered Illinois’ credit rating by one notch to just above junk status. S&P cited “the severe deterioration of Illinois’ fiscal condition, a byproduct of its stalemated budget negotiations” and Moody’s pointed to the “prolonged political impasse.”

A week earlier, the Senate had approved a budget for the upcoming fiscal year that included politically risky tax increases. But the House did not take up the Senate plan, with many members citing Governor Bruce Rauner’s pledge to veto it and worrying that a vote in favor of higher taxes would be used against them in the 2018 election.

Before adjourning, both chambers passed a resolution to remain in continuous session. House Speaker Michael Madigan said his members will keep working to prepare a budget, beginning with a public hearing on June 8 in Chicago.

After May 31, the Illinois Constitution requires a three-fifths vote by each chamber, rather than a simple majority, for a bill to become effective prior to June 1 of the next calendar year. This requirement was more pertinent when Democrats who control the legislature sent bills to a Democratic Governor, such as Governor Rauner’s predecessor Pat Quinn.

Now the General Assembly faces a Republican Governor who is more likely to veto its legislation, and a three-fifths vote is needed to overturn a veto regardless of when a bill is passed. The next budget deadline is June 30, the end of the current fiscal year.

Illinois has not had a complete budget since FY2015. Governor Rauner, who took office in January 2015, has said he would consider higher taxes to fill a budget gap left by the partial rollback of temporary income tax increases. In exchange, the Governor has insisted on economic and regulatory initiatives that have not been agreed to by the legislature.

Without a full budget for two years, the State has continued to function because of court orders, consent decrees and existing statutory requirements. Public schools have remained open due to full-year appropriations for elementary and secondary education.

At the end of the last fiscal year, on June 30, 2016, the Governor and legislators agreed to a stopgap spending plan that provided partial funding for areas of government that had received little or no financial support from the State since FY2015: higher education, certain social service and agency operations. The stopgap plan expired on December 31, 2016 and has not been replaced. It did not include general operating funds for State employee and retiree group health insurance, which have not been appropriated since FY2015.

Meanwhile, the State’s financial position has significantly worsened since last year, as costs incurred continue to exceed available resources. Payments have been deferred, resulting in a massive backlog of unpaid bills. As shown in the following chart, the backlog has nearly tripled to $14.5 billion at the end of May 2017 from $5.0 billion when the budget impasse began. 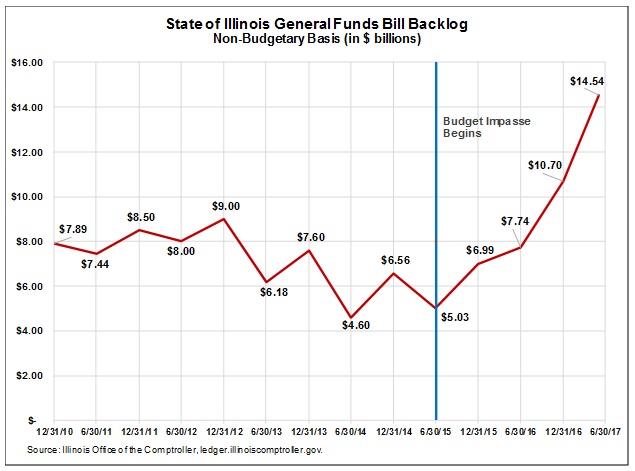 It should be noted that the numbers in the chart represent the amount of unpaid bills at a point in time, instead of on a budgetary basis. The budgetary basis backlog includes all of the prior year’s expenses that will have to be paid from a subsequent year’s revenues, whether or not the bills are on hand at the point of measurement.

Lengthy payment delays are causing severe financial strains for areas of government that are supposed to be paid without a complete State budget. Public schools have full-year appropriations but are still owed $1.1 billion in grants for special education and transportation, school superintendents said at a press conference in Springfield on May 31. Medicaid managed care companies, which are owed $2 billion and are supposed to be paid under federal consent decrees, have asked a judge to move them to the front of the line for payment.

The Senate budget plan began in December 2016 as a bipartisan effort to develop an FY2018 budget and implement policy changes urged by Governor Rauner. The effort, known as the grand bargain, included about a dozen linked pieces of legislation. In February, when the Governor issued his budget proposal for FY2018, it had an operating gap of $4.6 billion, which the administration proposed to fill by “working together on a ‘grand bargain.’”

The initiative eventually stalled after most Republicans declined to vote for the negotiated legislation. Governor Rauner has recently said he will not approve any tax hikes without a four-year property freeze, which many legislators have opposed because of concerns about the impact on school funding.

Senate Democrats subsequently separated the components of the grand bargain and passed many of them on party line votes. The legislation included a $37.3 billion spending bill—the same level as the Governor’s proposed budget—and a measure authorizing $5.4 billion in new revenue. The Senate plan was intended to result in an operating surplus of about $200 million in FY2018, but it did not address the accumulated backlog of bills from prior years.

Most of the additional revenue came from raising individual income tax rates to 4.95% from 3.75% and corporate tax rates to 7.0% from 5.25%. Under the temporary tax increase that took effect in January 2011 and rolled back in January 2015, rates had risen to 5.0% from 3.0% for individuals and 7.0% from 4.8% for corporations. The new rates in the Senate plan were retroactive to January 1, 2017, which meant that individuals would have faced a withholding rate of about 5.8% if the new rate was applied to paychecks beginning in June.

The House did not consider most of those Senate bills, but it passed the legislation dealing with school funding, government consolidation and procurement. The House also passed a measure authorizing the sale of the James R. Thompson Center in Chicago that was subsequently approved by the Senate. The Governor included net proceeds of about $240 million from the Thompson sale in his proposed FY2018 budget.

The Governor has said he would veto the school funding and Thompson sale bills; both have been placed on hold in the Senate. The Governor said he would sign the procurement bill although he had hoped for more sweeping reforms.

The State is on notice from rating companies that further downgrades could be forthcoming if the budget impasse is not resolved quickly. Fitch Ratings, the third major rating firm, stated earlier this month that it regarded the end of the fiscal year, rather than May 31, as the relevant deadline and indicated that Illinois’ rating could be lowered before the end of July.

“Illinois’ budget crisis and related deterioration in credit quality is the result of a political impasse between the Governor and legislature…It seems clear that a budget will not be enacted until a compromise is reached,” Fitch stated in a press release.