When the General Assembly reconvenes next week for its annual veto session, it is expected to continue deliberating whether to borrow in FY2011 to make its required pension payment. If approved, the borrowing plan would lighten the load on the already stressed General Funds of the State but would lead to dramatically higher debt service payments for almost a decade.

This would be the second year in a row that the State issued pension related debt rather than make its required payment to the retirement systems out of operating revenues. Last year the State sold $3.5 billion in Pension Obligation Bonds (POBs) to make its annual pension payment, effectively removing the cost from the operating budget. This allowed the State to use General Funds revenue that would have gone to make the payment for other State services.

The State’s pension payment for FY2011 is currently certified at $4.2 billion and the plan to borrow rather than paying it out of General Funds is still under consideration in the General Assembly. The legislation authorizing the sale of eight-year POBs, SB3514, was approved by the House of Representatives on May 25, 2010. The bill also calls for the retirement systems to recertify the amount the State is required to pay in FY2011 to account for pension reforms passed in the spring session that reduce benefits for future employees. The total is expected to decrease to roughly $3.7 billion if recertified. The bill authorizing the POBs for FY2011 did not advance in the Senate during the spring session or in a special session held on November 4, 2010. If the bill is approved when the General Assembly reconvenes later this month, the State will have sold a total of $17.2 billion of pension-related debt over the last decade. Selling the new bonds would also keep the State’s average annual debt service due on its POBs above $1.5 billion until FY2020. 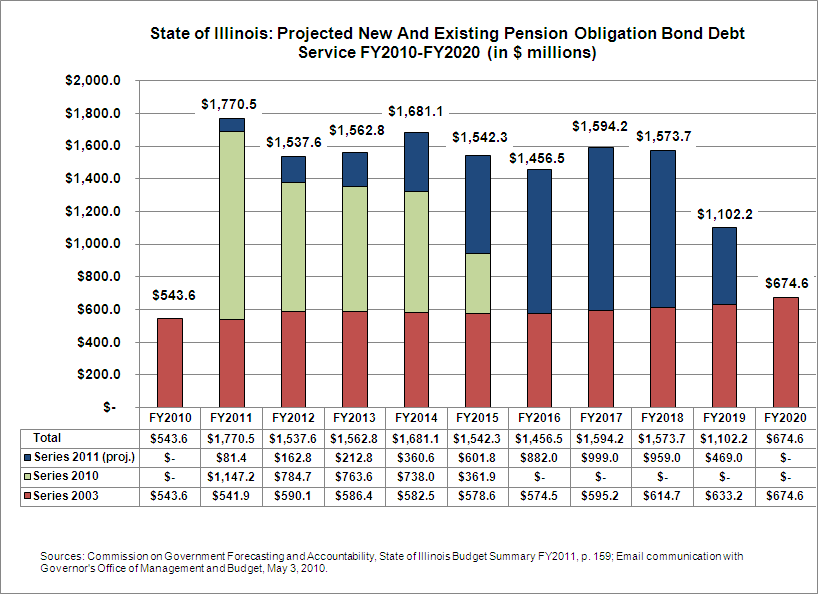 The graph above illustrates the back-loaded nature of the POBs proposed for FY2011. The estimates included were provided by the Governor’s Office of Budget and Management in May 2010 but the actual debt service would depend on the market conditions at the time issuance is sold. However, the structure shows how in order to make the annual debt service for the new bonds affordable, the State plans to pay only interest on the new POBs until FY2015. Then after the FY2010 POBs are fully repaid the State would begin to pay down the principal of the FY2011 bonds. By not paying principal in the early years of the FY2011 POBs, the interest cost charged for the new debt will be dramatically higher than the FY2010 bonds. The FY2010 POBs cost the State a total of $381.7 million in interest over five years, whereas the FY2011 bonds are projected to cost a total of $1.0 billion in interest for a similar amount of principal and only a slightly longer term.

Selling the POBs will lead to increased debt service that must be paid out of already insufficient General Funds revenues for many years to come. As previously discussed in this blog, although the State has reduced its appropriations over the past several year these cuts have not kept pace with the increases in required debt service for pension borrowing and the continuing increases in the State’s annual pension payment. By continuing to borrow to make its pension payments, the State will exacerbate its financial problems and make it harder to balance future budgets. Borrowing for operational costs, such as the annual pension payment, is a one-time revenue source and not a sustainable solution for closing the State’s operating shortfall. Selling POBs will also ensure that a similar imbalance between expenditures and revenues will exist in FY2012 when the borrowed funds are no longer available to make the annual pension payment.