Illinois lawmakers are on a fast-track schedule to reform the State’s Medicaid program, but proposals from state officials and other experts appear to face stiff opposition.

As previously discussed in this blog, the Illinois General Assembly’s review of the Medicaid program is part of a push by Democrats that began after the November 2 elections to make changes in state programs long criticized as too costly by Republicans. Bipartisan Medicaid Reform committees in the Senate and House of Representatives have been charged with developing legislative proposals to be acted on before the 97th General Assembly is inaugurated on January 12, 2011.

At hearings of the committees in the past three weeks, the Illinois Department of Healthcare and Family Services (HFS) has testified on ways to deliver healthcare more efficiently to low-income residents. The ideas include increasing use of Health Maintenance Organization (HMO)-style managed care, moving disabled people from institutions to community care and reducing the prescription drug dispensing fee paid to pharmacies. Many of the proposals have been supported by civic groups including the Civic Federation and by Governor Pat Quinn’s Taxpayer Action Board, which made recommendations in June 2009 for immediate savings on Medicaid and other areas of state government.

However, the proposals have triggered sharp criticism from legislators, healthcare industry officials and labor unions. At a hearing in Chicago on December 14, 2010, HFS Director Julie Hamos urged lawmakers to support the agency’s efforts. Ms. Hamos said HFS has gotten “pushback” from policymakers, providers and advocates. “I’m here to ask you for backup,” Ms. Hamos said to a panel of legislators.

Illinois and states across the nation are trying to rein in their Medicaid programs, which cost more than $327 billion, or 21.1% of total state spending in FY2009, according to the National Association of State Budget Officers. Yet Medicaid savings are often difficult to achieve because of general healthcare inflation and the complex way in which the program is financed.

Medicaid is a joint state-federal program that finances healthcare for certain categories of low-income people, including children, pregnant women, parents, the elderly and the disabled. Recipients must be citizens or permanent legal residents. Beginning in 2014 under federal healthcare reform the program will also cover needy adults without children. The federal healthcare reform act requires that states not tighten current eligibility requirements, although there is a limited exception from January 1, 2011 through December 31, 2013 for a state that certifies it has a budget deficit on or after December 31, 2010.

Under Medicaid, states pay for medical expenses and are reimbursed by the federal government for a portion of their costs. Illinois is currently reimbursed for nearly 62% of its Medicaid expenditures because of enhanced funding under the federal stimulus program, but the reimbursement rate is expected to fall to approximately 50% after the stimulus funding ends on June 30, 2011. In FY2009 Illinois spent $14.3 billion on Medicaid, according to NASBO, but the state-source General Funds portion of the total was $4.3 billion. General Funds support the regular operating and administrative expenses of most state agencies and are the funds over which the State has the most control and discretion. Illinois’ program covers roughly 2.6 million recipients.

John Stephen, a Boston-based consultant who wrote the Medicaid section of the Taxpayer Action Board’s report, told Illinois lawmakers that the State should move more aggressively to expand HMO-style managed care and to shift the disabled out of costly state institutions and into community settings. However, the State’s first experiment with mandatory HMO enrollment—a pilot program for approximately 40,000 elderly and disabled Medicaid recipients in the Chicago suburbs—has been criticized by advocates and lawmakers. In HMOs, patients are restricted to a particular network of doctors and healthcare providers are paid a fixed fee for each patient. Critics are concerned that expanding HMOs would lead to service reductions.

State officials have also called for quicker movement of disabled patients into community settings. However, under agreements with Council 31 of the American Federation of State, County and Municipal Employees, the State is prohibited from closing state facilities through June 30, 2012.

In response to a request from the House Medicaid Reform Committee, HFS submitted information on medical services provided by Illinois that are not reimbursed by the federal government because recipients’ income is too high or recipients are not in a population category covered by the Medicaid program. Reducing or eliminating these programs would not affect federal funding. 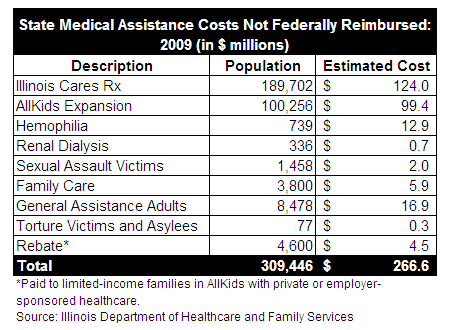 The most costly services at $124 million were provided under Illinois Cares Rx, a prescription drug program that supplements coverage for seniors in Medicare Part D. Seniors in the program do not qualify for Medicaid because their income levels exceed federal limits. In his FY2011 recommended budget, Governor Quinn proposed cutting the cost of the program in half by requiring seniors to pay a larger share, but the plan did not attract a legislative sponsor.

The expanded portion of the AllKids program, Illinois’ Medicaid program for children, cost the State $99.4 million in 2009. AllKids was expanded in 2006 to cover children whose family income exceeded Medicaid limits and undocumented immigrant children. Senate Bill 2152 would ban any non-emergency care to non-citizens. The third most costly services involved medical care for adults who received General Assistance and were not eligible for Medicaid. This program applied only to the City of Chicago and cost the State $16.9 million in 2009.