The U.S. Department of Transportation notified Illinois in the past week that it would receive two additional grants for high-speed rail. On May 4, 2011, the State learned it would get another $186 million in funding to continue upgrading tracks to facilitate faster train service between Chicago and St. Louis. The second grant, announced on May 9, 2011, totals $196.5 million for the Illinois section of high-speed line being built between Chicago and Detroit. The increases in federal funds for these projects were made available through a reallocation of the $2.4 billion initially set aside for high-speed trains in Florida, which the state’s governor recently turned down, scrapping the project.

Illinois already has been awarded $1.2 billion in federal funding for high-speed rail through the American Recovery and Reinvestment Act of 2009. The State committed $400 million of its own funds to support high-speed rail as part of the Illinois Jobs Now! capital program, which began in 2009.  Illinois has spent $98 million of the federal grants so far and has yet to tap into the appropriated state capital funds. Illinois’ portion of the project funding will be made using capital purpose General Obligation (GO) Bonds. The high-speed rail construction is managed by the Illinois Department of Transportation, which oversees the State’s construction of roads, bridges, rail, mass transit and aeronautics facilities.

As part of the State’s annual budget process, Governor Pat Quinn proposed a $27.1 billion capital budget, of which more than half is dedicated to transportation projects. The proposed FY2012 capital budget marks the second annual reauthorization of unspent appropriations from the capital program.

Since FY2005 the Governor’s annual recommendations for the capital budget and the operating budget have been submitted as separate documents. The major difference between the budgets is that the appropriations in the operating budget are intended to be spent in the year they are approved, while appropriations in the capital budget are to fund large infrastructure investments that often take several years to complete and must be reappropriated each year as a project moves forward. The capital budget is also primarily funded by long-term debt to pay for major projects over 20 to 30 years.

The total capital-spending plan is made up of $23.1 billion in reappropriations and $4.0 billion of new capital spending proposed by the Governor. Of the total funding, $16.8 billion falls under the management of the Illinois Department of Transportation (IDOT). The proposed FY2012 capital budget would reauthorize $14.3 billion in previously approved IDOT capital projects and increase the department spending by $2.2 billion.

The largest increase in new appropriations proposed in the FY2012 capital budget is for additional highway projects totaling $2.0 billion. All of the proposed new highway funds are from pay-as-you-go sources including federal, tax and user fee generated funds. The Illinois Community College Board also received a significant amount of new funding totaling $94.1 million for both new construction and facility renewal. 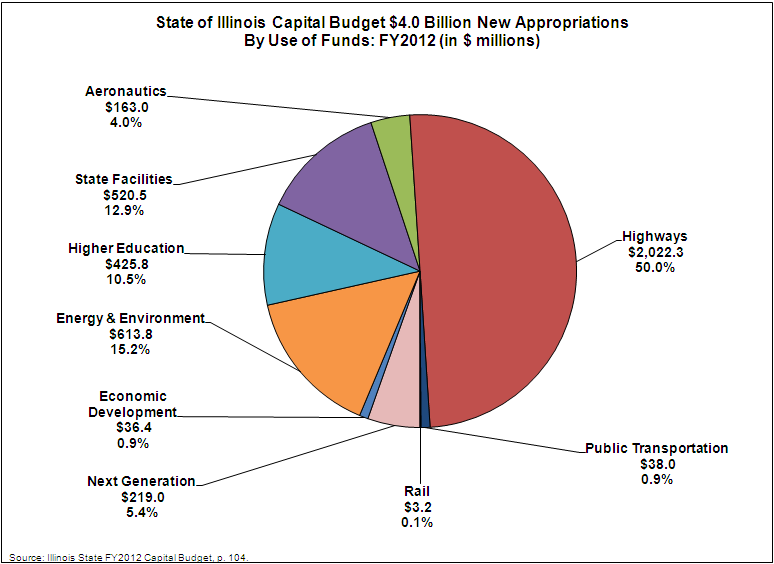 With the addition of the new federal grants for high-speed rail, the new capital funding could grow by $382.5 million more than is shown in the chart above.

In FY2012 the Governor proposes the reauthorization of $23.1 billion in capital appropriations. The capital budget is largely funded through the issuance of additional GO Bonds and Build Illinois Bonds. Bond-funded projects make up $14.6 billion of the proposed reappropriations or 63.0%.

The largest use of the reappropriated funds is $6.7 billion for highways followed by $3.0 billion for public transportation. The new and reappropriated highway funds are part of the State’s multi-year road programs. However, the $8.8 billion in capital spending on roads and bridges in the capital budget do not match the totals in the recently announced update to the multi-year road plan. The Governor’s Office unveiled the annual update of the State’s transportation funding on April 7, 2011. The new multi-year program for FY2012 through FY2017 totals $11.5 billion.

Of the $3.6 billion originally allocated in the FY2010 capital budget for public transit funding, only $900 million will be spent on maintenance for the Chicago Transit Authority, the largest provider of mass transit in the State. The CTA has identified a need of more than $6 billion in capital funding to maintain its bus and rail system. A portion of the $38 million in new federal grants for mass transit in the proposed FY2012 capital budget may be used for CTA. However, these funds are earmarked for planning only and cannot be used for needed system maintenance. Instead, the new FY2012 federal funds will go toward planning for the proposed Circle Line train service or other expansion projects.The budget document does not specify the precise apportionment of this new federal mass transit funding for transit planning purposes.

The reappropriations also include the $400 million promised by the State to support high-speed rail included in the Inland Ports funding and reappropriations of $300 million of State bond funding for the Chicago Environmental and Transportation Efficiency Program (C.R.E.A.T.E.). The budget also calls for the reauthorization of $110 million to build a third Chicago regional airport south of the city. The FY2012 capital budget proposes reappropriation of $1.6 billion for the statewide school construction program and $1.8 billion for projects at public universities.

The following chart shows the proposed reappropriations in the FY2012 capital budget by type of project. 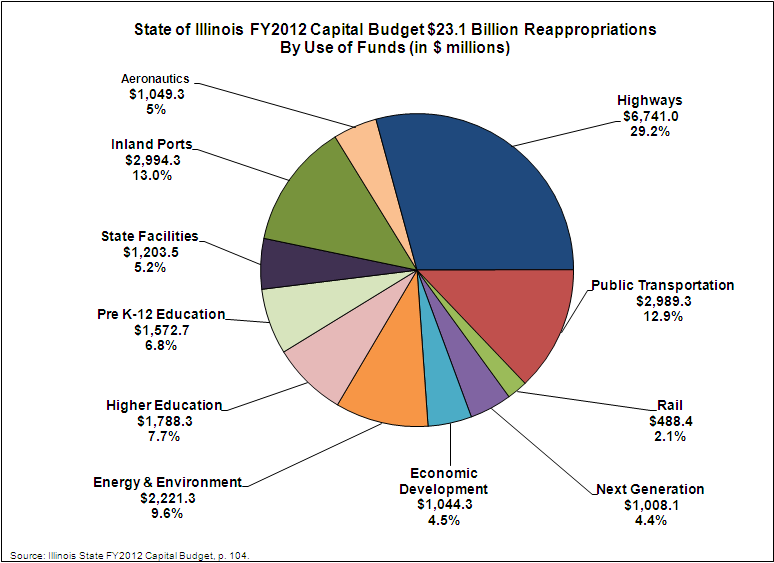 More information on the State’s ongoing capital spending and the Governor’s proposed FY2012 capital budget can be found in the capital section of the Civic Federation’s recently published State of Illinois FY2012 budget analysis.