Internet Sales Tax Legislation Does Not Automatically Apply to Illinois

Many cash-strapped states are looking to a proposal in the U.S. Congress to help collect sales taxes on internet purchases. The legislation could lead to a windfall in recaptured state sales tax revenues but currently would exclude Illinois.

The U.S. House of Representatives and the U.S. Senate are debating identical versions of the Marketplace Fairness Act (H.R. 684 and S. 743). The new law would require larger online retailers to collect and remit sales taxes due for online purchases to the states where the goods are delivered. However, it would only automatically apply to states that are members of the Streamlined Sales Tax and Use Tax Agreement.

The Streamlined Sales Tax and Use Tax Agreement aims to simplify sales tax and use tax collection and administration by retailers. Illinois was one of the original 44 states that contributed the development of the agreement but did not join the 29 states that ratified the standards in 2002. Since Illinois is not one of the current 24 active members of the agreement, the State will not automatically benefit from internet sales tax collection if the Marketplace Fairness Act becomes law. The Senate passed its version of the bill on May 6, 2013 by wide bipartisan majority (69-27-4) and President Barack Obama is supportive of the proposal. However, the bill may face more scrutiny in the U.S. House of Representatives, where some members consider the bill a tax increase.

Even if the bill is approved, Illinois could continue to lose out on sales taxes associated with online purchases, which the Illinois Department of Revenue (IDOR) estimates have totaled $904 million since FY2008.

Illinois could participate without full membership in the Streamlined Sales Tax and Use Tax Agreement by adhering to a set of minimum sales tax simplification rules specified in the Marketplace Fairness Act. This would allow the State to receive remote collection authority, which forces online retailers to collect sales taxes on the State’s behalf. Among other changes, the law would have to provide that Illinois appoint a single government authority to administer and audit all online sales tax collections from retailers; adhere to the streamlined sales tax agreement’s sourcing rules for interstate transactions; define a single sales tax base for local and state jurisdictions; provide a list of all taxable transactions and exemptions; and exempt all small retailers that have gross receipts of less than $1 million annually.

The Marketplace Fairness Act also requires that states provide software free of charge to retailers for sales tax collection and remittance, as is currently required of all members of the streamlined agreement.

Among the required changes, altering Illinois’ sales tax sourcing rules could prove controversial due to the current regime that is based on order acceptance rather than the streamlined standard of product delivery. This issue is currently the focus of litigation between the Regional Transit Authority and several municipal governments in Illinois.

Illinois also recently lost a lawsuit over its own attempt to tax online retailers, which was known as the “Amazon Tax.”

IDOR estimates that untaxed online transactions will reduce Illinois sales tax revenues by $197 million in FY2013, based on the State’s 5.0% portion of the sales tax. Of that total, $120 million is attributable to household purchases and $77 million to business purchases. In FY2008 the total was $125 million in total losses, of which $73 million were household purchases and $52 million business purchases. The following chart shows the total sales tax losses from FY2008 through FY2013 estimated by the revenue department. (Click to enlarge.) 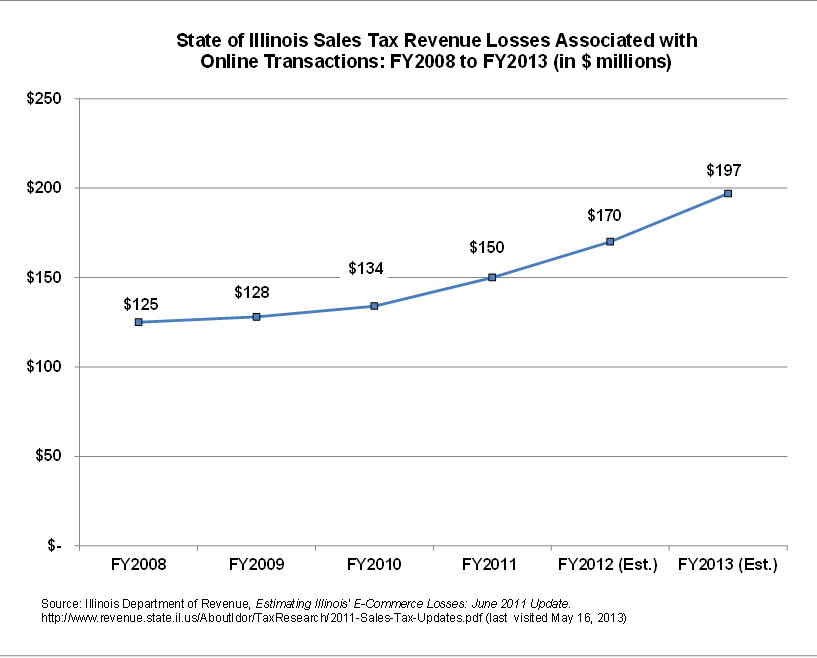 The growth of revenue losses from online sales taxes is outpacing the State’s natural growth in revenue over the last several fiscal years. The State’s General Funds revenues from sales taxes fell dramatically from FY2008 through FY2010 due to the economic downturn and did not return to prerecession levels until FY2012. Since then existing sales tax revenues have been mostly flat and are projected to increase by less than 1% in FY2014 from FY2013.

The following chart shows total General Funds revenues from existing sales taxes for FY2008 through the projected total for FY2014.(Click to enlarge.) 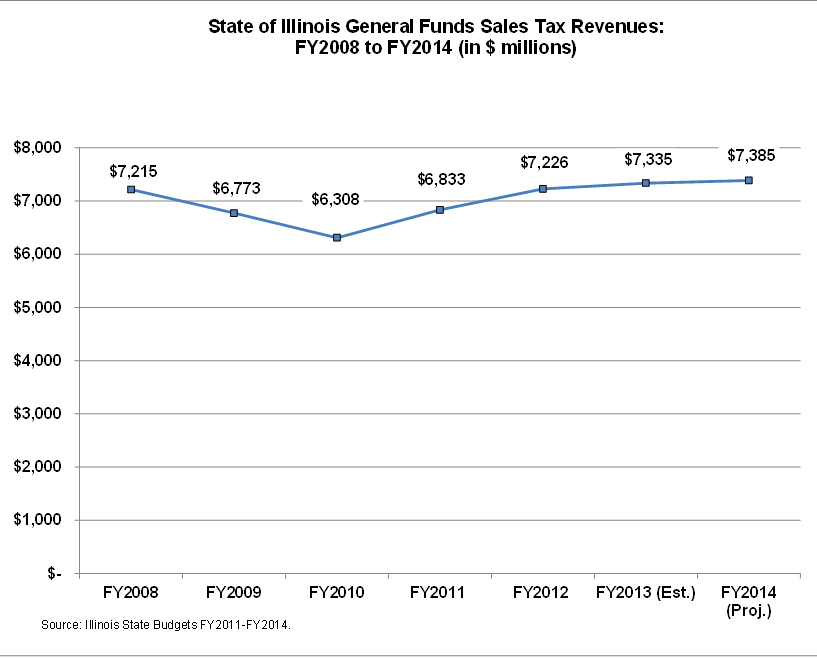