Due to its growing backlog of overdue group health insurance bills, the State of Illinois is expected to pay a total of at least $454 million in interest penalties in the current and upcoming budget years, according to a new report.

The report by the General Assembly’s Commission on Government Forecasting and Accountability (COGFA) shows that the backlog of unpaid claims held by the State Employees’ Group Insurance Program stood at approximately $2.9 billion at the end of February 2016. That figure is up from $2.05 billion at the end of October 2015.

In the absence of an FY2016 budget, the group health insurance program is one of the major areas of State government for which there appears to be no legal authority to pay the bills. Nevertheless, the program’s costs must be paid eventually because of State law and union contracts. Unlike most other State bills, group health insurance claims may be paid from future years’ appropriations under an exception to Section 25 of the State Finance Act.

As previously discussed on this blog, the State is required to pay interest penalties on overdue health insurance bills under two statutes. Under the State Prompt Payment Act, which applies to managed care companies, interest accrues at 1% a month on “proper bills” that are not paid within 90 days. Proper bills are defined as those that include the information needed to process the payment. Claims from healthcare providers accrue interest at 9% a year after 30 days under the Illinois Insurance Code.

However, the backlog is increasing by about $200 million per month due to the budget impasse, meaning that interest penalties are continuing to grow.

The COGFA report describes the mounting cost of interest penalties as a “matter of concern for policymakers and budgeters” because the payments represent “lost money” that could be spent elsewhere in the group health insurance program or on other State services. The report contrasts the rates paid on overdue bills to the current prime commercial lending rate of 3.5%.

The following chart shows interest penalties related to the State group health insurance program. The State paid $522.1 million in such penalties from FY2008 through FY2015, according to data from the Illinois Comptroller’s Office. The estimated payments of $221.0 million in FY2016 and $233.0 million in FY2017 would bring the total to $976.1 million over the ten-year period. 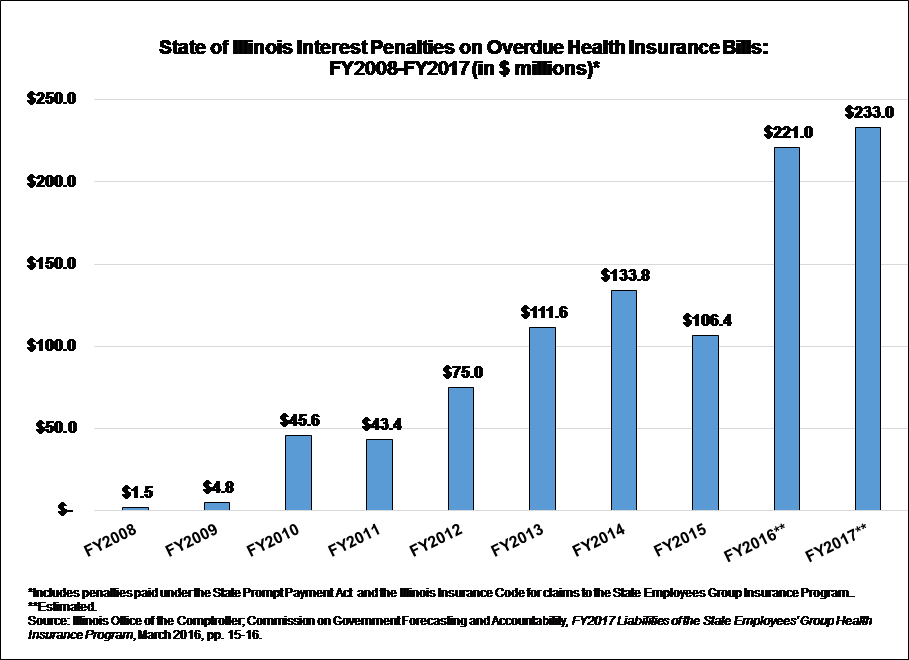 During the budget impasse, insurance premiums are being deducted from State employees’ paychecks and health insurance coverage is continuing. The Department of Central Management Services (CMS), which runs the group health insurance program, notified participants in September 2015 that managed care companies had agreed at that time to pay health care providers on their normal schedule, even though payments to the health maintenance organizations themselves were delayed.

For self-insured plans, in which the State pays the direct cost of each claim, payment delays to health care providers were expected to increase until a budget is passed. If doctors or hospitals requested to be paid up front for service, CMS advised participants to contact the companies that administer the plans for the State. If no resolution could be reached, participants were advised to make arrangements for reimbursements once providers were paid by the plans.

According to the COGFA report, managed care companies were waiting 479 days to be paid as of the end of February 2016. Providers in the largest self-insured plan were waiting between 446 days and 523 days.

Throughout the United States there is a bipartisan consensus that...

As Illinois voters head to the polls for next week’s Presidential primary, this blog post looks at another major choice that will be on the general election ballot in November: whether to replace the State’s flat-rate income tax with a graduated rate structure. The post reviews the proposed new...