A new study by the Kaiser Family Foundation found that Medicaid enrollment declined by 0.6% across the United States in 2018—the first nationwide drop since 2007. The decrease was linked to a stronger economy, which caused more people to gain jobs and health insurance, as well as increased efforts in some states to verify eligibility.

The Kaiser study did not provide enrollment information for individual states. Data on the State of Illinois’ website, which is not strictly comparable to the Kaiser numbers, show that Medicaid enrollment in Illinois declined by 171,913, or 5.5%, in the fiscal year that ended on June 30, 2018 to 2.97 million beneficiaries from 3.14 million a year earlier.

Total Medicaid enrollment in Illinois peaked in FY2015 due to individuals who were newly eligible under the Affordable Care Act (ACA). For Illinois and the 32 other states that have chosen to participate, the ACA expanded eligibility to low income adult citizens who are neither elderly nor disabled and who do not have dependent children. According to the Kaiser study, although enrollment across the U.S. continued to increase until FY2018, the rate of growth declined after FY2015.

The following chart shows Medicaid enrollment in Illinois from FY2012 through FY2018 for individuals receiving comprehensive benefits at the end of each fiscal year. Medicaid is a joint federal-state program that pays for healthcare for low income people who fall into specified eligibility categories, as shown below. 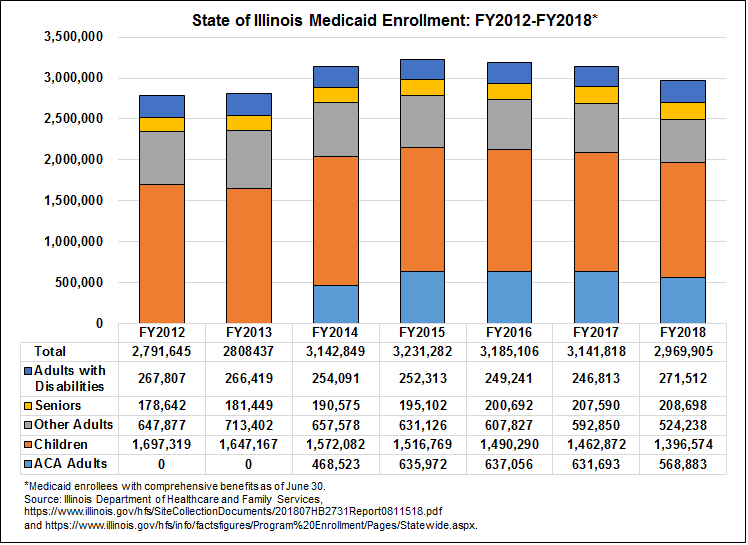 Officials at the Illinois Department of Healthcare and Family Services (HFS), the State’s main Medicaid agency, did not have an immediate comment on the enrollment trends, but they cautioned that the latest numbers on the website might be subject to revision.

Illinois is one of the states that has made efforts to tighten annual eligibility verification procedures over the last few years in line with federal requirements. Increased eligibility screening was considered to be particularly important as the State moved toward mandatory Medicaid managed care in 2015. Under traditional Medicaid, the State pays only for services actually used, but under managed care the State pays a set monthly fee for each participant.

Advocates have recently attributed enrollment decreases to the State’s increased efficiency in cancelling recipients’ enrollment in the Medicaid program. Earlier this year, the State automated the system for removing individuals from the Medicaid rolls if they fail to sign up on time; while cancellations occur promptly, renewals can be subject to lengthy delays while eligibility verification forms mailed to State offices are processed by hand.