UPDATE: On June 4, 2014, the State of Illinois filed its application for a $5 billion Medicaid plan with the federal government. Advocates for Medicaid recipients said they were told by State officials that there were no substantial changes from the version of the plan posted for public comment in February.

Despite a scheduled submission date of March 12, 2014, the State of Illinois has not yet filed an application to use more than $5 billion in new federal funding over five years to overhaul its Medicaid program.

The delay was mentioned by State officials on April 9 at a hearing before the House Human Services Appropriations Committee. In response to a question about the proposal’s potential impact on FY2015 spending, Michelle Saddler, Secretary of the Department of Human Services, noted that the plan has not yet been submitted to the federal government.

A spokesman for the Illinois Department of Healthcare and Family Services, the State’s main Medicaid agency, offered no immediate explanation for the delay. A timeline on the State’s website had given March 12 as the application date, but currently no submission date is listed. The website entry was revised this week to state that March 2014 was the earliest opportunity for submitting the application.

After the plan was made public last fall, State officials said it was critical to move forward quickly with the application while federal regulators were receptive to such proposals. Following the release of a concept paper in November 2013 and a draft application in January 2014, the final application was issued on February 10 and public comments were due by March 10.

The State’s proposal, called The Path to Transformation, focuses on building Illinois’ capacity to provide community-based care for the disabled and those with mental health and substance abuse problems. The expansion of community-based services accounts for $3.2 billion, or 61.5% of the total $5.1 billion outlined in the application. The total amount of proposed new federal funding in the final application increased from a preliminary estimate presented at a General Assembly hearing in January.

The $5.1 billion proposal includes spending $1.3 billion in new federal money to transform the delivery of Medicaid services by accelerating the movement to managed care. Managed care seeks to reward hospitals and doctors for keeping patients healthy and keeping costs down. This is in contrast to the traditional fee-for-service system, in which payment to healthcare providers is based on the volume of services provided.

Another $555 million in new federal funding would be used for workforce training to expand the number of primary care workers needed to serve Medicaid recipients. The State also plans to use $100 million in additional federal dollars for public health initiatives, including $50 million to expand maternal-child home visitation programs.

The following table shows the State’s proposed uses for the requested federal funds. The proposed total of $5.146 billion shown in the table is slightly below the $5.2 billion cited in a press release issued by the Governor’s Office on February 12, 2014. The reason for the discrepancy could not be determined. 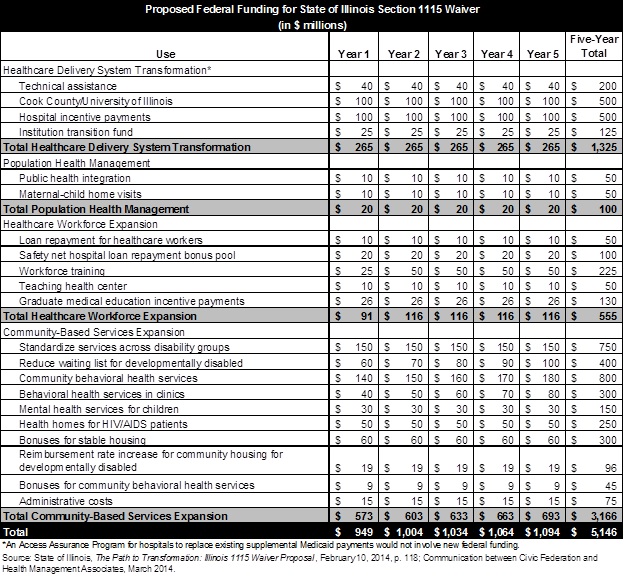 The actual amount of new federal funding and how it is used will depend on the outcome of negotiations between the State and the federal Centers for Medicare and Medicaid Services (CMS) of the U.S. Department of Health and Human Services. State officials have said it could take six months to a year to reach a final agreement with CMS after the application is submitted.

As previously discussed here, Illinois’ proposal is a Section 1115 waiver. Section 1115 of the Social Security Act allows CMS to waive certain Medicaid requirements for experimental, pilot or demonstration projects that promote the objectives of the program. Medicaid is a joint federal-state program in which state spending is reimbursed by the federal government; the federal matching rate in Illinois is generally 50%.

As explained here, Illinois plans to generate additional federal dollars mainly by receiving federal matching funds for State expenditures that are not currently reimbursed but that contribute to the health of the Medicaid population. These expenditures are known as Costs Not Otherwise Matchable, or CNOMs. If CMS agrees to reimburse these costs, then State revenues would be freed up for spending to transform the Medicaid program. This spending, in turn, would also be matched by the federal government.

One of the proposed CNOMs, for instance, is Illinois’ $97.4 million annual spending on nursing homes specializing in the mentally ill, known as Institutions for Mental Diseases (IMDs). If this expense were federally reimbursed, Illinois would use the $48.7 million in freed up State money to pay for intensive community services for those discharged from IMDs. A cycle of State spending and federal reimbursement would generate another $48.7 million in federal funds.

Additional federal money would come from financial arrangements in which contributions from local governments or healthcare providers are used to draw federal matching funds. One proposal, for example, involves a new tax (known as a provider assessment) on group homes for the developmentally disabled. The assessment of $19.2 million a year on Community Integrated Living Arrangements, or CILAs, would be matched by funding from the federal government. The total $38.4 million a year would pay for an increase in reimbursement rates designed to expand access to community services.

In order to win federal approval, Illinois must show that its proposal is “budget neutral” to the federal government. Budget neutrality means that federal spending under the waiver does not exceed projected federal spending without the waiver. Neutrality is calculated over the life of the waiver, allowing states to receive upfront federal funding for investments that are projected to generate savings in future years.

The State justified its use of the Medicare cost growth rate by pointing to a decline in average annual per capita Medicaid spending during this period. (Average annual total spending increased due to higher enrollment.) The State reined in per capita Medicaid costs by freezing reimbursement rates to healthcare providers for decades and making program and rate cuts in FY2013 under the Save Medicaid Access and Resources Together (SMART) Act. According to the proposal, costs would rise more quickly in the future without the investments requested in the waiver.