The State of Illinois currently pays the entire bill for health insurance premiums for 90% of retired state workers. Under Illinois law, retirees with at least 20 years of government service and their survivors do not have to pay any portion of their health insurance premiums. Governor Pat Quinn’s FY2011 budget includes a proposal to save state taxpayers $254.5 million by requiring all retirees to pay part of their premium costs. For some retirees, the new expense would be substantial.

Health insurance costs for employees and retirees has been a rapidly growing part of the State’s budget, increasing by $393.9 million, or 22.0% in the last five years, from $1.8 billion in FY2007 to $2.2 billion in FY2010, according to a recent report by the Commission on Government Forecasting and Accountability (COGFA). The Department of Healthcare and Family Services (HFS) estimates that costs will rise by $59.9 million, or 2.7%, to $2.24 billion in FY2011.

The indemnity plan, known as the Quality Care Health Plan or QCHP, is the most expensive option. It offers traditional fee-for-service coverage, in which participants are permitted to choose any physician or hospital. PPOs and HMOs are forms of managed care, in which patients’ choices of healthcare providers are restricted to control costs. 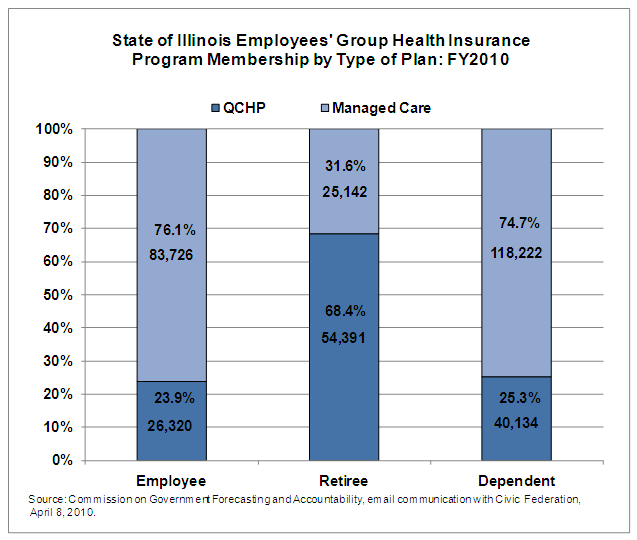 In his FY2011 budget, Governor Quinn proposed that the State limit its share of retiree health insurance premiums to $300 per month. The change would mean that Medicare-eligible retirees, for whom the state plan serves as supplemental coverage, would pay between $4 per month and $50 per month, depending on which insurance plan they chose. For retirees not on Medicare, the cost would be between $290 per month and $500 per month, according to HFS.

The Governor’s proposal would require a change in state law. However, it is not clear whether a proposal that affects only retirees—and not current employees—would require negotiations with labor unions.

In his FY2010 budget, the Governor proposed increased premiums for both employees and retirees who participated in QCHP. The proposal faced considerable opposition from Council 31 of the American Federation of State, County and Municipal Employees (AFSCME), which represents many of the affected state workers. No action was taken on the proposal by the General Assembly.

In October of 2009, the State began charging retirees a monthly premium for dental insurance. This action did not require a change in state law, because dental insurance is not part of basic health coverage. Council 31 of AFSCME filed a grievance against the State, arguing that it had historically bargained with the union over the terms of retiree healthcare and that the State could not unilaterally make a change in retiree dental coverage. An arbitrator ruled against the union, and in March of 2010 the union filed a lawsuit against the State in Cook County Court over the issue.