Next week Governor Pat Quinn will give his sixth budget address since taking office in 2009. The budget is expected to be one of the most difficult of his tenure considering that the State is currently expected to have approximately $5.4 billion in unpaid bills at the end of FY2014 and will see a loss of $1.6 billion in General Funds revenues in FY2015, due to the reduced income tax rates that take effect on January 1, 2015 under current law.

After requesting a delay in the release of his FY2015 budget recommendation, to March 26 from February 19, Governor Quinn will finally reveal his spending plan next week for the coming fiscal year, which begins on July 1, 2014.

According to a statement from the Governor’s office, the delay was necessary in order to also provide a five-year plan for addressing the State’s ongoing financial woes as part of his budget proposal. The later date also moved the address after the spring primary elections held on March 18. It is expected that the five-year plan will build off of the three-year plan published by the Governor’s Office of Management and Budget (GOMB) in January, as required under State law.

As discussed here, the General Assembly has moved forward with its budget process for FY2015 despite the delay in the Governor’s recommendation. The legislature has agreed on a revenue estimate that was much lower than the amounts provided by the Illinois Department of Revenue. The General Assembly’s estimates show a $2.2 billion reduction in General Funds revenues for FY2015, compared to the $1.6 billion loss shown in the Revenue Department’s estimates. It is unclear if the Governor will use the legislative projections for his budget as well.

Under State law the Governor cannot include any revenue sources that are not already enacted as part of his budget recommendation and the State Constitution requires that expenditures in the proposal do not exceed revenues. However, unlike other states that require a consensus revenue estimate among the legislature and the executive branch, there is no requirement in Illinois that the Governor use the same revenue estimates as the General Assembly.

As part of an analysis of the State’s long-term financial challenges, the Civic Federation provided a five-year benchmark projection for the State’s General Funds budget in its State of Illinois FY2015 Budget Roadmap. The benchmark projection was based on the Governor’s three-year plan with only a few modifications and extended out two more years.

The benchmark projection was developed as a starting point for defining the budgetary problems facing the State as it heads into FY2015 and progresses through FY2019. Not only does the State face a General Funds revenue loss of $1.6 billion in FY2015, it also will see a total peak-to-trough decline of $3.9 billion in FY2016 operating resources compared to FY2014 after accounting for a full year of the lower income tax rates. Under current law, the individual income tax rate declines to 3.75% from 5.0% and the corporate income tax rate declines to 5.25% from 7.0% halfway through FY2015. The benchmark projection also takes into account spending pressures such as the State’s required annual pension contributions, increases in healthcare costs (mostly Medicaid), growth in employee group health costs, annual debt service payments and statutorily required transfers.

The following excerpt from the FY2015 Budget Roadmap describes the conclusions drawn from the five-year benchmark projection. It shows the anticipated annual operating deficits and growth in unpaid bills based on the available data for trends in spending and revenues for the next five years, if those trends are not changed. A more detailed discussion of the revenue and expenditure assumptions used to develop the projection is included in the full report.

This projection might understate the actual growth in unpaid bills. The forecast assumes a relatively modest increase of 2.7% a year in Medicaid costs. The expenditure projection also assumes that the State will realize savings in FY2016 based on the new pension legislation, which is in the early stages of litigation.

Although the projections show a small surplus in FY2014, annual General Funds deficits increase dramatically from FY2015 through FY2019 due to the scheduled reduction in income tax rates and continued expenditure growth.[1]

The General Funds operating deficit is projected to total $4.2 billion by FY2019 compared to a surplus of $1.0 billion in FY2014. The following table shows major revenue sources and spending categories that contribute to operating deficits from FY2015 to FY2019. 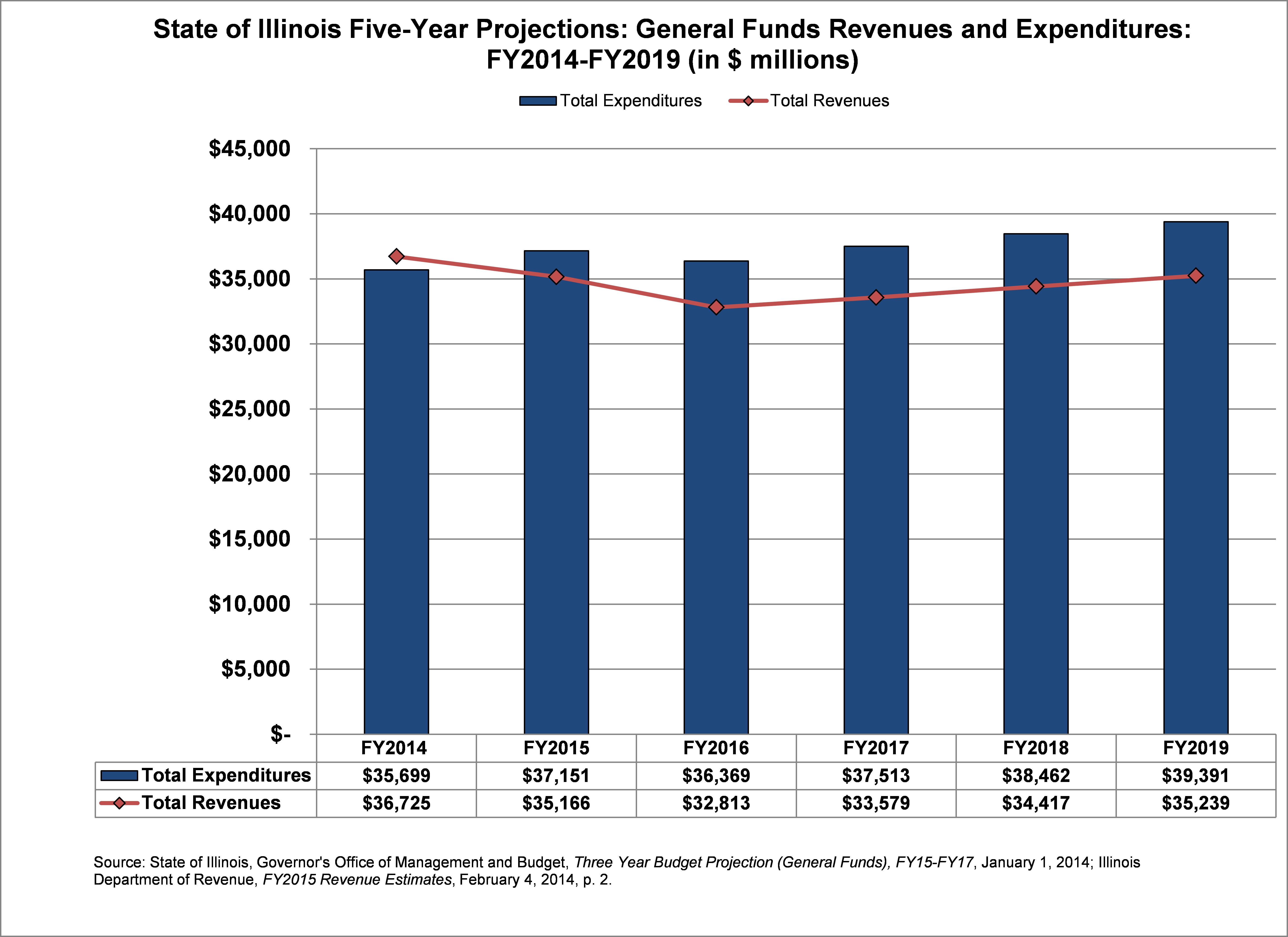 Illinois has dealt with its General Funds deficits by delaying payments to vendors, social service agencies and local governments in order to pay those bills from the next year’s revenue. Beginning in FY2013, the State’s lapse period—the period after the end of the fiscal year during which this year’s bills can be paid from next year’s revenues—was permanently extended from two to six months.[2] 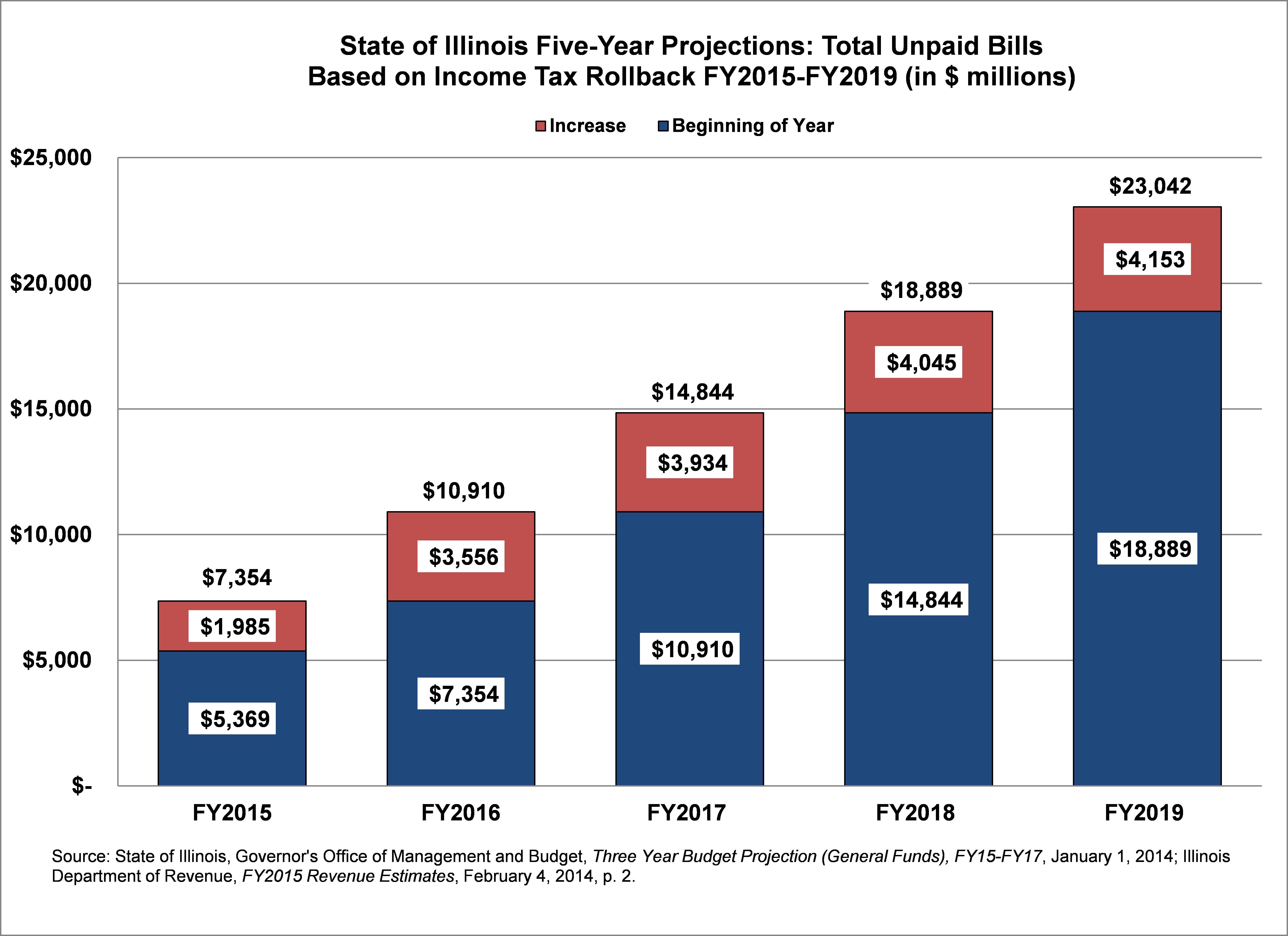 It is unclear how the State could continue to provide basic government services if unpaid bills were allowed to grow to the levels shown in the chart above. The State would need to use more than half of projected FY2019 General Funds revenues of $35.2 billion to pay off the FY2018 backlog of $18.9 billion, significantly draining FY2019 resources and creating unsustainable payment delays.

The complete five-year projections section and several balanced budget alternative plans, including the Civic Federation’s comprehensive plan to stabilize the State’s finances, are available in the full FY2015 Budget Roadmap.