The Elephant in the Room

Earlier this spring the Civic Federation opposed the $26 billion capital plan proposed by Governor Quinn because it was unaffordable over time and was not based on a capital improvement plan (CIP).

The massive spending proposal was heavily debt funded, borrowing $10.6 billion for new projects (HB 312) and (HB 313). The Governor also planned to refinance the State’s existing $11.8 billion of capital purpose bonds scheduled to expire over the next 10 to 15 years in order to take advantage of lower interest rates and reduce debt service payments.

However, the reduced debt service costs for the first two years of the new payment plan were considerably higher than the actual $170 million in projected savings over the entire life of the debt restructuring deal, so the State would pay less now but pay more later. The savings being taken in the FY2010 and FY2011 budgets totaled more than $700 million. This was a fiscally bad idea because it relied on one time funding to try to close the State’s budget gap and back-loaded the refinanced debt with increased costs to pay for the additional cash advance. In other words, what the State was planning to do is equivalent to a consumer taking out cash during a mortgage refinancing to pay for her ongoing bills.

When the new proposed debt service schedule and existing schedule are shown in a graph, an ominous figure emerges: 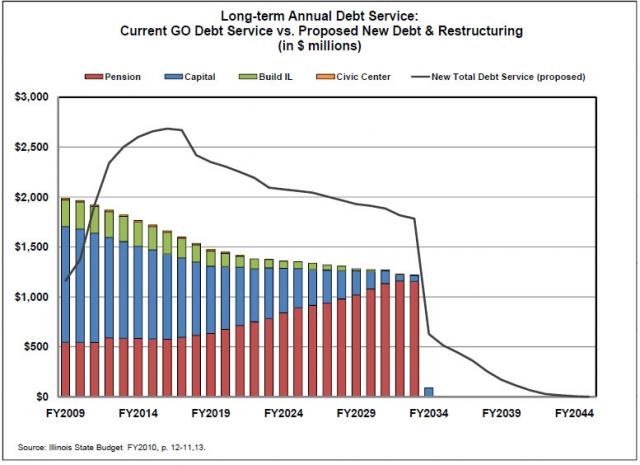 While the bars showing the existing debt schedule slope gently downward, the line representing the new debt service schedule shoots upward, towering above the existing payments in the silhouette of a large pachyderm. For 2009 and 2010, the new schedule would allow the State to pay roughly $1.4 billion less in debt service, but at huge price in future years. As soon as 2012, the new debt service cost skyrockets to $2.3 billion and reaches $2.7 billion by 2016—nearly $1 billion more than the level in the current debt schedule.

However, this plan was not adopted. Instead, a bigger capital spending plan dependent on more borrowing and additional debt to make the State’s pension payment was passed by the General Assembly along with the restructuring plan. Even without a balanced operating budget, Governor Quinn signed these larger capital-spending appropriations into law. The total amount of spending grew to $31 billion and will still be heavily debt financed. The debt-restructuring plan was passed and an additional $3.5 billion was added to the State’s General Obligation Bond authorization to pay for short-term pension notes.

Until the new bonds are actually sold, we will not know exactly how much bigger the annual debt service animal may grow but considering the new borrowing for capital and pensions as well as the State’s plummeting debt ratings it is certainly not going to be any smaller. Fitch’s Ratings actually mentioned all of these increases in debt as a contributing factor to its second downgrade of Illinois’ credit rating in the last year. The increased interest charges that come with the lower ratings will also add to the looming debt service stampede. We can be certain that an even larger animal is charging at the State of Illinois in the next budget cycle than the one that was staring us down in the proposed in FY2010 plan.

For a complete picture of the State’s debt profile, see the debt section IIFS State Budget Analysis beginning on page 76.