Supporters of a graduated income tax have emphasized its potential to stabilize the State of Illinois’ shaky finances and reduce pressure on local property taxes. However, like the previous income tax increases in January 2011 and July 2017, the new tax structure would continue to short assistance to local governments, many of which also face severe financial pressures.

Public Act 101-0008, the graduated tax plan enacted in June 2019, is projected to generate an additional $3.6 billion for the State, according to the Governor’s Office of Management and Budget (GOMB). Local governments would see their share of State income taxes grow by an estimated $100 million.

The graduated tax plan will only take effect if Illinois voters amend the State’s Constitution, which currently requires a flat income tax. During its spring 2019 session, the General Assembly also approved an amendment to be placed on the ballot in November 2020. If the amendment passes, the new rates will be in place for half of fiscal year 2021, which begins on July 1, 2020.

The table below shows estimated additional annual State revenues from the graduated tax structure approved by the legislature and signed by Governor J.B. Pritzker. Incremental income taxes are net of amounts required to be set aside to pay tax refunds. 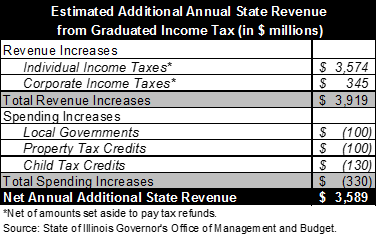 These revenue and spending increases are somewhat different from the numbers attached to Governor Pritzker’s original graduated tax plan, which was unveiled in March 2019. As explained here, the Governor’s original plan generated net new revenue of $3.4 billion for the State. Local governments fare noticeably worse under the enacted plan. While the enacted tax plan has a $100 million increase for local governments, the original plan proposed a $237 million increase.

The $100 million increase would give Illinois counties and municipalities approximately $1.46 billion, or 5.41%, of the $26.9 billion in net revenues generated by the enacted graduated tax plan, according to GOMB’s estimates. Public Act 101-0008 specifies that 5.32% of net individual income tax revenues and 6.16% of net corporate tax revenues be deposited into the Local Government Distributive Fund (LGDF), the State account designated to hold the local share. The money is allocated to local governments based on population.

Until 2011, local governments received 10% of the State’s net income tax revenues. The share was subsequently reduced to 10% of pre-2011 rates, which prevented counties and municipalities from benefiting from State income tax increases. That policy remained in place in FY2018, after the State enacted a permanent income tax increase. To help the State budget, the LGDF share was reduced by 10% in the FY2018 budget and by 5% in the FY2019 and FY2020 budgets. With the holdback, the effective LGDF share in the past two years has been 5.84%, including 5.76% of individual income taxes and 6.51% of corporate income taxes.

The tax rates in the enacted plan were also modified slightly from the Governor’s original proposal, although the overall structures are quite similar. Instead of the current flat individual tax rate of 4.95%, both plans have a schedule of tax rates that increase at higher income levels. In both, tax rates start at 4.75% and exceed the current 4.95% only for taxpayers making more than $250,000. The Governor’s plan has a top rate of 7.95% for income over $1 million; in the enacted plan, the peak rate of 7.99% applies to single filers earning more than $750,000 and joint filers with more than $1 million. In both plans, the top rate applies to all income, not just the last dollar of income, and 97% of tax filers are expected to have lower tax bills. Corporate income tax rates, now at 7.0%, rise to 7.95% in the Governor’s proposal and 7.99% in the enacted plan. Those rates do not include the 2.5% Personal Property Replacement Tax, which is unchanged.

If the constitutional amendment is approved, it remains unclear how the additional $3.6 billion in revenue from the new income tax structure would be used. Governor Pritzker has said that he would devote $200 million per year to paying down Illinois’ massive unfunded pension liabilities, which totaled about $134 billion at the end of FY2018.