On September 9, 2015, the Cook County Board of Commissioners approved the preliminary budget of the County’s public health system for the fiscal year that begins on December 1, 2015 and runs through November 30, 2016. The vote cleared the way for inclusion of the preliminary budget in the County Board President’s overall FY2016 budget recommendation, which is scheduled to be announced in October.

In FY2016 the County is expected to reduce its tax support for the Cook County Health and Hospitals System by $39 million, or 23.8%, to $125 million from $164 million in FY2015. That does not include County payments of approximately $60 million for pensions and $75 million for debt service.

The Health System’s reliance on the County has declined due to the growth of its CountyCare managed care plan, which is expected to account for 62.3% of FY2016 operating revenues. CountyCare began in early 2013 as a pilot program for adults newly eligible for Medicaid under the federal Affordable Care Act and has expanded to cover other Medicaid recipients who are now required by the State of Illinois to enroll in managed care plans.

The plan had approximately 169,000 members at the end of August 2015 and was the largest Medicaid managed care plan in Cook County. Because of CountyCare, the Health System’s share of uninsured patients—who generally do not pay for their medical services—has declined to 32.3% of all patients from 54.4% in FY2013.

To stay competitive and fill the revenue gap caused by reduced County support, the Health System hopes to make its outpatient services more appealing to patients. The Health System receives a monthly fee for each CountyCare member, but most of that revenue is paid to clinics and hospitals in the plan’s broad network of healthcare providers. The Health System itself, with two hospitals and 16 clinics, accounts for only about 20% of CountyCare’s medical claims.

The FY2016 budget is based on ambitious assumptions, including increasing the Health System’s share of CountyCare claims to 30% and boosting outpatient visits by 15% after a slight decline in FY2015. The plan calls for extending clinic hours, refurbishing clinic facilities and reconfiguring underused space in John H. Stroger Jr. and Provident Hospitals to make room for outpatient services. The Health System wants to attract more patients to imaging services, ophthalmology and outpatient surgery.

Although the proposed number of full-time equivalent positions is roughly flat from FY2015 at 6,736, positions are slated to be added or eliminated to accommodate shifting needs. Personnel costs are budgeted to increase significantly due to collective bargaining agreements, but the Health System is projecting a dramatic decrease in overtime costs tied to a realignment of work shifts. Vacancies are assumed to decline from approximately 950 at the end of FY2015 to 600 in FY2016.

The Health System’s budget also covers Cermak Health Services, the infirmary at Cook County jail, which has attracted attention for its large population of detainees with mental health issues. The Health System is considering strategies to reduce costs and improve care by keeping those with behavioral health problems out of jail, where medical services are not covered by Medicaid.

One alternative being discussed is creating a 24-hour center where Chicago police could drop off non-violent offenders for mental health treatment and referral.

Accrual accounting is used in governments’ audited financial statements in accordance with principles of the Governmental Accounting Standards Board. In accrual accounting, revenues are recognized when they are earned, regardless of when cash is received, and expenses are recognized when they are incurred, regardless of the timing of cash flows. Certain expense items, such as depreciation, are recorded on an accrual basis but not on a cash basis. 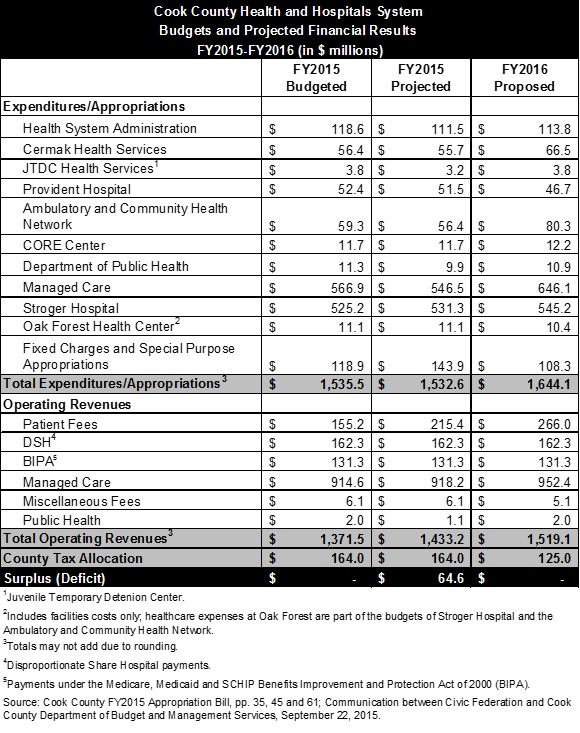