This is an update of a previous Civic Federation blog on the finances of the Metropolitan Pier and Exposition Authority (MPEA). Since that post, MPEA has continued to face COVID-19 pandemic related economic disruptions. It issued $160.7 million in bonds in September to reduce debt service costs in FY2021 and provide liquidity for operations in FY2021 and FY2022.

As the COVID-19 pandemic enters its sixth month, it continues to deal a severe blow to Chicago’s hospitality and tourism industries. This in turn has seriously disrupted the revenue streams used to pay for bonds issued by the Metropolitan Pier and Exposition Authority (MPEA) and the Illinois Sports Facilities Authority in Chicago (ISFA).

MPEA bonds are special limited obligations. The debt service on these bonds is paid for with proceeds of four tourism-related taxes: [1]

If those revenues are insufficient to fund debt service, an allocated portion of State of Illinois sales tax is available to service the debt. This draw on the use of state sales tax revenues occurs automatically, whether or not appropriating legislation has been passed.

McCormick Place recently received STAR accreditation from the Global Biorisk Advisory Council. The accreditation indicates that a facility has met strict guidelines for controlling risks associated with infectious diseases such as COVID-19. This will assist MPEA in resuming hosting of events when it is cleared to reopen by the State of Illinois.

The Impact of COVID-19 on MPEA Activities and Revenues

Gubernatorial and mayoral executive orders issued in the wake of the COVID-19 pandemic have virtually halted activity at McCormick Place, Wintrust Arena and the Arie Crown Theater. It was reported in late July that at that the total economic impact of cancelled events for the City was approximately $1.6 billion.

Moody’s Investor’s Services published an Issuer Comment on August 31, 2020 noting that tax revenue pledged to support MPEA bonds fell by 85% in August 2020 as compared to August 2019 and that monthly collections for June through August were 78% less than in the prior year at the same time.

MPEA notes in the Official Statement for its September 2020 bond issue that it cannot at this time fully quantify the economic impact that COVID-19 related limited restrictions will have on its operations, revenues or overall financial condition.  However, it has provided some metrics illustrating the depth of the situation.

As of August 19, 2020, 149 events scheduled at McCormick Place facilities through June 30, 2020 were cancelled. The Authority had expected 1.57 million attendees and about $167 million in revenue from those events. Approximately 61% of these events have been rescheduled; this includes a total of 265 future events booked over the next five years with a pre-COVID estimated attendance of 5.6 million.

MPEA provided financial data in the September Official Statement detailing operating losses from April to July 2020. As the chart below shows, even reduced expenses have greatly exceeded revenues for each of those months, with operating loses ranging from $8.0 million in April to $7.0 million in July. 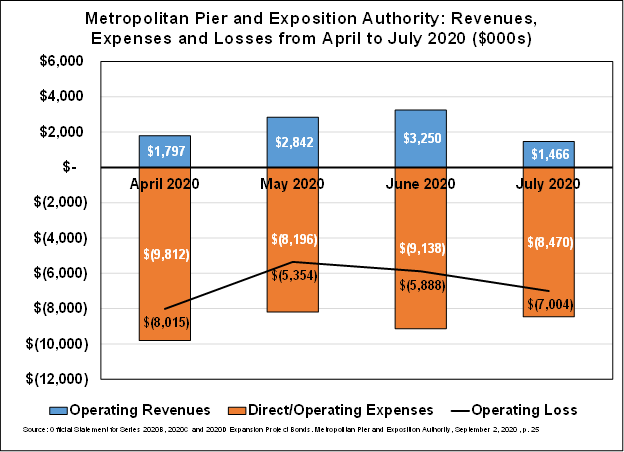 MPEA’s Response to the Financial Situation

In response to operating losses, MPEA has reduced its expenses by taking significant personnel actions that include laying off or furloughing 2,300 of its 2,800 employees. Employees still working have been required to take 15-day furloughs. Employer contributions to deferred compensation plans have been frozen and most overtime has been eliminated. In addition, non-essential operating and maintenance spending has been eliminated, energy consumption reduced and non-priority capital deferred.[2] Currently the Authority is preparing a modified financial plan for FY2021-FY2023 to reflect these changes.

MPEA expects that the State of Illinois will provide funding for its operations for FY2021. The State appropriated the amounts of $14.4 million and $42.0 million in its budget bill, Public Act 101-637 to fund Authority operations. These funds have not yet been received, but MPEA does expect them at some point in FY2021. The State budget implementation bill (BIMP), Public Act 101-636 allowed the MPEA to issue bonds to provide working capital during FY2021 and FY2022 if the Authority is not able to host events through June 2021. The BIMP also increased the amount of State sales tax deposits into a fund that is a backup for MPEA debt service.

On September 2, 2020, MPEA issued $160.7 million in bonds to address its financial situation. Of that amount:

The proceeds of the Series 2020B and Series 2020C bonds will be used to refund certain outstanding bonds and pay issuance costs in order to reduce debt service costs in FY2021 to match available revenues and avoid drawing on State sales tax. The proceeds of the Series 2020D bonds are intended to provide liquidity and will be used to cover certain FY2021 operational and maintenance expenses and may potentially be used to pay for FY2022 expenses. The maturity dates and interest rates for each of the bonds is shown below.

Fitch expressed concern that the state’s pledge of revenues in the event of nonappropriation was insufficient to fully mitigate risk. However, Fitch did report that even with sharp declines in revenues due to COVID-19 there should still be adequate revenue to maintain debt service coverage. A negative rating change or downgrade could be triggered if there was a severe economic downturn extending into the second half of 2020 or into 2021.

Standard and Poor’s (S&P) reported a negative outlook on the bonds because their MPEA credit rating is directly linked to the agency’s credit outlook for the State of Illinois. S&P notes that the State must move toward structural budgetary balance if it is to maintain investment grade status for its debt. If the rating for the State’s general obligation bonds is lowered due to negative economic factors, the rating for MPEA bonds will be lowered as well. S&P does expect that MPEA’s revenues will likely be depressed for at least the next two fiscal years due to the impact of the COVID-19 pandemic. S & P affirmed its BBB rating on the Authority’s debt that is outstanding.[4]

Moody’s Investor Services had revised their outlook on MPEA bonds from stable to negative on April 9, 2020, affirming the bond rating at Ba1. MPEA bonds were rated below the State of Illinois general obligation sales tax revenue bond rating of Baa3 because sales tax pledges for State debt, including a backup pledge for MPEA bonds, require annual legislative approval. In its Issuer Comment of August 31, Moody’s noted that the State’s burden in assisting in MPEA’s debt service payments was relatively small. Total MPEA debt service through FY2022 is approximately $260 million or 8.8% of all State general obligation debt service while the Authority’s maximum annual debt service totals about 4.5% of Illinois’s total sales tax revenue.

[1] A portion of the debt service is also paid for annual energy savings from projects financed with 2019A project revenue bonds. MPEA FY2019 Audited Financial Statements at, p. 37.