The coronavirus pandemic has dealt a severe blow to Chicago’s hospitality industry. Conventions have been cancelled, dine-in restaurants have closed, airport traffic has plunged and sporting events have been cancelled. As of early April, the City had experienced the loss of over 20 conventions and 250,000 hotel bookings related to those events.[1] The coronavirus closures have had an abrupt and serious impact on the hospitality tax revenues used to pay for bonds issued by the Metropolitan Pier and Exposition Authority (MPEA) and the Illinois Sports Facilities Authority in Chicago (ISFA).

Bonds issued by these entities are backed up by pledges from the State of Illinois and the City of Chicago if the primary revenue sources are inadequate. Unfortunately, the negative financial situation across the United States comes at a time when the City of Chicago expects serious revenue shortfalls and the State of Illinois projects a General Funds FY2020 revenue shortfall of $2.7 billion and a FY2021 shortfall of up to $7.4 billion.[2]

This blog post presents information about the finances of the Metropolitan Pier and Exposition Authority (MPEA) and the Illinois Sports Facilities Authority in Chicago (ISFA).

The MPEA is a municipal corporation located in the City of Chicago. It owns and operates the McCormick Place Convention Center, the largest convention center in North America, as well as Hyatt Regency McCormick Place, the Marriott Marquis Chicago and the 10,000-seat Wintrust Arena. The Authority is governed by a 9-member Board of Directors. Four of the directors are appointed by the Governor of Illinois, four by the Mayor of Chicago and the ninth member is the Chairman, who is chosen by the other Board members.

The economic impact of McCormick Place is substantial. A 2017 study by the University of Illinois at Chicago concluded that activities related to the convention center deliver an estimated regional economic impact of nearly $1.73 billion annually and support 15,000 Illinois jobs.[4]

The MPEA FY2020 operating budget was $315.4 million.[5] In F2019, the last year for which audited data are available, the Authority had over $4.1 billion in convention center expansion and revenue bonds outstanding.[6]

The MPEA’s operations and capital program are financed with the following tourism-related taxes:

MPEA bonds are special limited obligations. The debt service on these bonds is paid for with proceeds of the four taxes listed above.[7] If those revenues are insufficient to fund debt service, an allocated portion of State of Illinois sales tax is available to service the debt. This draw on the use of State sales tax revenues occurs automatically, whether or not appropriating legislation has been passed.[8] Between 2008 and 2010, when its debt was restructured, Authority revenues were not sufficient to service its debt, thus requiring draws on Illinois sales tax revenues.[9]  In 2017 legislation was approved that allowed MPEA to use surplus tax amounts to repay prior year sales tax draws.[10] By 2019 MPEA had repaid those funds.[11]

Whether payments for bonds are made from pledged tourism taxes or State sales tax receipts, the legislature must annually appropriate funds for debt service payments.

The closure of Chicago’s hospitality industry will likely at some point trigger the requirement to use State sales tax resources to fund the Authority’s debt service at the same time it is projected that State’s sales tax revenues will drop dramatically, by a projected $1.5 billion from prior forecasts in FY2021.

In response to the worsening financial situation nationally, Standard and Poor’s revised their outlook on MPEA bonds from stable to negative on April 3, 2020. The credit rating of BBB was affirmed for outstanding McCormick Place expansion bonds. The outlook change reflected the State of Illinois’s worsening fiscal situation due to the COVID-19 pandemic. Concern was also expressed about lack of budgetary flexibility and constitutional limits the State faces in dealing with its mounting pension obligations.[12]

Moody’s Investor Services also revised their outlook on MPEA bonds from stable to negative on April 9, 2020. The bond rating was affirmed at Ba1. MPEA bonds were rated below the State of Illinois general obligation sales tax revenue bond rating of Baa3 because sales tax pledges for State debt, including a backup pledge for MPEA bonds, require annual legislative approval.[13]

Fitch downgraded MPEA bonds to BB+ from BBB- with a negative outlook on April 16, 2020. The rating change was based on concerns about the State’s declining financial situation caused by the coronavirus pandemic’s impact on tax collections, Illinois’ lack of meaningful reserves and its limited ability to utilize other financial management tools to mitigate the serious fiscal situation. The Fitch analysis also noted that sales tax pledges require annual legislative approval.[14]

The Illinois Sports Facilities Authority (ISFA) is a municipal corporation created in 1987 to build, renovate and maintain sports stadiums for professional teams in Illinois. ISFA owns and operates Guaranteed Rate Field, home of the Chicago White Sox baseball team. In 2001 its authority was expanded to include bonding authority to fund the renovation of Soldier Field, home to the Chicago Bears football team, as well as parkland adjacent to the stadium.[15]

In FY2018, the most recent year for which ISFA provides public budget data, the Authority collected $65.9 million in taxes, fees and other resources.

The Authority is financed by a complex mix of taxes and fee revenues, discussed below.

The State of Illinois advances to ISFA every month for the first 8 months of each fiscal year a sum equal to the difference between the annual amounts appropriated to the Authority from the Illinois Sports Facilities Fund less the subsidy portion of the appropriation. The amount advanced is drawn from State hotel tax revenues and is repaid with proceeds of the ISFA hotel tax. It is set at an annual increase of 5.615% from the base year amount of $22.2 million in FY2002 through the year FY2032.  The annual State advances to the Authority are subject to legislative appropriation.[16]

If ISFA hotel taxes are not adequate to repay the State advance in a given year, the City of Chicago must repay the shortfall from its share of State income taxes from the State’s Local Government Distributive Fund.[17]

These funds are subject to subject to annual appropriation by the legislature.

Fees from the Chicago White Sox: ISFA receives annual fees from the White Sox baseball team. In FY2018, they amounted to nearly $1.9 million. These fees are provided primarily through three mechanisms: 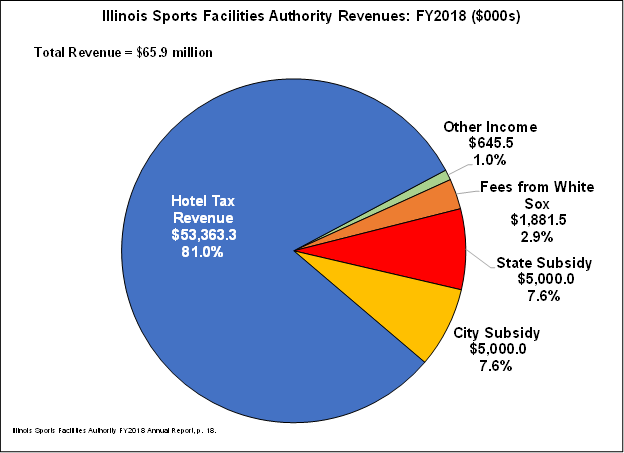 In FY2018, the last year for which ISFA published budget data, Authority expenditures were overwhelmingly used for capital purposes: 64%, or $40.7 million, were earmarked for principal and interest payments on outstanding debt while 15.8% of spending, or $10.0 million, was used for capital improvements. The next largest amount, $5.3 million, was used for maintenance of Soldier Field in a subsidy to the Chicago Park District. 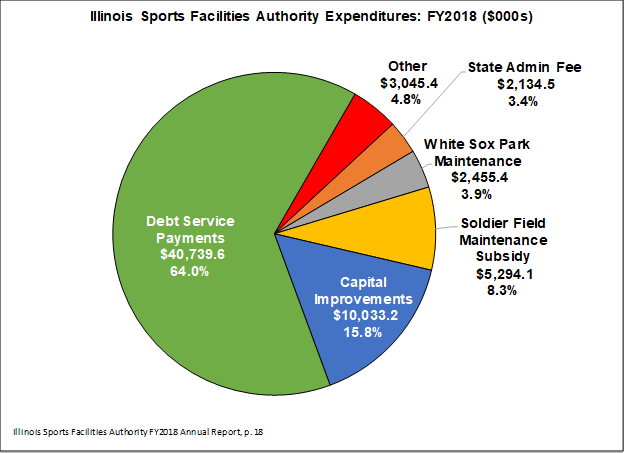 Standard and Poor’s revised the outlook from stable to negative on ISFA bonds on April 3, 2020 but affirmed the Authority bonds’ BBB rating. The negative outlook was based on the rating agency’s revised outlook on the State of Illinois, which now carries a BBB- rating with a negative outlook. The outlook reflects concerns about the fiscal impact of the COVID-19 pandemic on State finances as well as Illinois’ limited budget flexibility.[25]

Fitch also downgraded ISFA bonds to BB+ from BBB- with a negative outlook on April 16, 2020. The Fitch analysis also noted that the State tax advances to the ISFA for its bonds are subject to legislative approval.[26]

[7] A portion of the debt service is also paid for with annual energy savings from projects financed with 2019A project revenue bonds. MPEA FY2019 Audited Financial Statements at https://www.mpea.com/wp-content/uploads/2020/01/FY19-MPEA-Audited-Financial-Statements.pdf, p. 37.

[18] There are also media fees on broadcast income. Article III (sections 3.01 and 3.02) of the Management Agreement between the Illinois Sports Facilities Authority and the Chicago White Sox Ltd., June 29, 1988.