This blog post is an update to the Civic Federation’s April 9, 2020 blog post: How COVID-19 is Impacting Chicago’s Criminal Justice System and How Public Safety Agencies are Responding.

The Sheriff’s letter also said the Cook County Jail is currently housing 100 inmates who otherwise would have been turned over to Illinois Department of Corrections custody. An executive order issued by Governor JB Pritzker suspended all admissions to the Illinois Department of Corrections from all Illinois county jails. Some groups have praised the suspension of prison admissions, while some county sheriffs have opposed the order.

Following a class action lawsuit filed on April 3 against the Cook County Sheriff for failure to take measures to prevent the spread of coronavirus in the jail, a Preliminary Injunction filed on April 27 required the Sheriff to take additional steps related to social distancing and testing. On May 11 the Sheriff appealed the Preliminary Injunction, asserting that the Jail had achieved full compliance with its requirements. Plaintiffs filed a reply on May 12 including 15 declarations on behalf of jail detainees describing an ongoing lack of social distancing and sanitary conditions in the jail.

As of May 14, the Cook County Sheriff’s Office had reported 227 active positive COVID-19 cases, including 133 jail detainees, 74 correctional officers and 20 other Cook County Sheriff’s employees. Four detainees were being treated at local hospitals. Cumulatively, the jail has seen 947 positive cases. Another 396 detainees and 314 employees previously tested positive and are in recovery or returned to work. Seven detainees and three employees have died due to COVID-19. Additionally, 1,236 jail detainees have tested negative for COVID-19.

According to figures posted on the Illinois Department of Corrections (IDOC) website as of May 14, 193 inmates and 161 staff had tested positive for COVID-19. Of those, 149 inmates and 132 staff had recovered. Every detention facility in the State has had at least one positive COVID-19 case, though the majority of cases have been at the Stateville Correctional Center near Joliet. There have been 11 deaths at Stateville due to COVID-19. IDOC reportedly has only tested 2% of the inmate population.

IDOC has released 1,025 prisoners early, nearly all of whom had less than six months left of their sentence to serve, and more than half of whom had been sentenced for low level felonies. Another 87 inmates received furloughs, allowing medically vulnerable people to be temporarily released. As of May 7, more than 3,500 additional prisoners had been released since March because they served their full sentence and reached their release dates.

The suspension of many criminal and civil court cases in Cook County has been extended by the Cook County Chief Judge through May 31, with several exceptions for matters authorized to proceed: bail hearings, arraignments and preliminary hearings; plea agreements to conclude a case; jury trials already in progress; child abuse and neglect cases; domestic violence petitions for orders of protection; emergency petitions in child support matters; and other emergency requests in civil matters. All court hearings are being conducted remotely via videoconferencing. Criminal court hearings including bond hearings, preliminary hearings and arraignments for both felonies and misdemeanors are being livestreamed online to the public.

As of May 8, the Chief Judge’s Office reported that 25 employees had tested positive for COVID-19, including 10 employees at the Juvenile Temporary Detention Center (JTDC). In addition to the employees, six JTDC residents tested positive. According to an April 27 update from the Chief Judge’s Office, 190 JTDC residents were released between March 16 and April 25. The JTDC population on April 27 was 170 children, a decline from 210 on March 15, with 145 new admissions during the same period.

The Loyola University Chicago Center for Criminal Justice Research, Policy and Practice created a website to track COVID-19’s effect on Chicago crime trends and related justice system data. The data show that the total number of reported crime incidents in Chicago decreased by 31.8% between March 16 and May 3. The number of enforcement-driven crime reports (meaning reports by officers rather than citizens) decreased by 59.9% during the same time period. Reported crime during this period decreased in all 12 of the top reported offense types: Narcotics, Criminal Trespass, Deceptive Practice, Other Offense, Theft, Assault, Battery, Burglary, Robbery, Weapons Violations, Criminal Damage and Motor Vehicle Theft. Narcotics reports decreased most significantly, by 78.6%. Decreases in reported crime have occurred in all areas of the City, with the largest decreases occurring in the Loop and Near North Side.

Crime statistics posted weekly on the Chicago Police Department website for high priority crimes as reported by the CompStat crime management system show that year-to-date crime between January 1 and May 10 this year has decreased in most major crime categories compared to past years. Theft has decreased by 18% compared to the same time period in 2016. Burglary is 40% lower than the same period in 2016, robbery is down by 31% and murder is down by 17%. However, it should be noted that the murder rate in 2016 was significantly higher than prior years due to an increase in gun violence that year. The year-to-date statistics for the past five years are shown in the following chart. 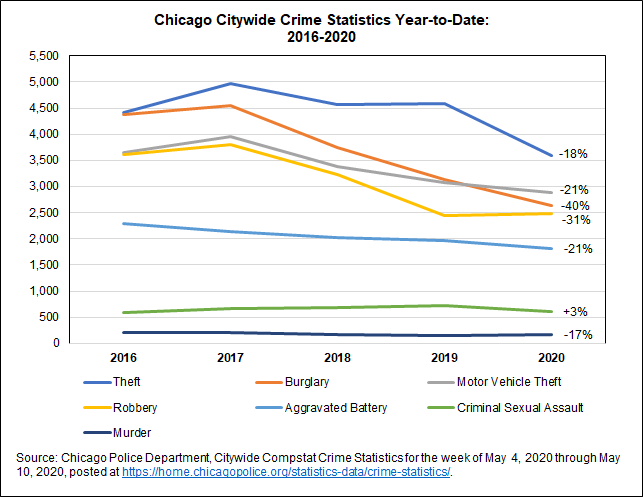 The Chicago Police Department announced that as of May 13, there were 508 COVID-19 cases among CPD employees, including 483 officers and 25 civilians. Three officers have died of COVID-19.

[1] Information provided at the May 15, 2020 meeting of the Cook County Justice Advisory Council.

As discussed in a previous blog post , the unprecedented public health emergency brought on by coronavirus has led local governments in Illinois to enact...