*Note: This blog post was updated on April 13, 2018 with more recent information on the Chicago Public Schools’ short-term borrowing and cash flow position.

Chicago Public Schools (CPS) is heading into the next annual budget cycle for the 2019 fiscal year that begins on July 1, 2018. In a letter from CEO Janice Jackson to principals, CPS announced that individual school budgets will be delivered to principals in early April, much earlier than recent years. Last year, principals received their school budgets in July due to delays from the State budget impasse. The District’s fiscal year runs from July 1 through June 30 and the District must approve an annual budget within 60 days of the start of its fiscal year, or by August 30.

As CPS prepares its FY2019 budget, the Civic Federation takes a look at what has happened with CPS finances since the District passed its FY2018 budget in August 2017.

The Chicago Board of Education approved the CPS FY2018 budget on August 28, 2017 based on two funding assumptions: 1) that the State would provide $300 million in additional funding through a proposed evidence-based statewide school funding formula set forth in Senate Bill 1; and 2) that the City of Chicago would provide $269 million from an unidentified source. At the time, Senate Bill 1 had been approved by the Illinois General Assembly, but Governor Bruce Rauner issued an amendatory veto that significantly changed portions of the funding formula and would reduce funding levels for CPS. The Illinois Senate voted to override the Governor’s amendatory veto but the House failed to override in a vote taken on August 28, 2017, the same day the Board of Education voted on the CPS budget. It was unclear whether CPS would receive the funding it was counting on.

Another version of the statewide school funding bill, Senate Bill 1947 House Amendment 5, consisted of the revised formula along with terms reached through a compromise between the Democratic majority leaders and Republican minority leaders, which are described in this blog post. The bill passed the House on August 28, 2017 and the Senate on August 29, 2017. The Governor signed it into law on August 31, 2017 as Public Act 100-0465.[1]

As a result of the new statewide school funding formula, CPS received an additional $450 million consisting of $221 million from the State of Illinois to pay the normal cost contribution to the Chicago Teachers’ Pension Fund, $130 million through new authority to increase a property tax levy specifically to fund teacher pension costs, $76 million in additional State Aid revenue, $19 million in State grants and an additional $4 million in State Aid above the originally anticipated amount. All of these funding sources will be recurring revenues.

Additionally, the City of Chicago pledged to provide CPS with $80 million for school security and other student safety costs.

CPS incorporated these funding changes into an amended budget approved by the Chicago Board of Education on October 25, 2017.

The historic new school funding formula and the additional funding for Chicago teachers’ pensions served as a major assist to the District’s operating budget. However, CPS still remains challenged with severe financial problems due to its reliance on short-term borrowing, its long-term debt burden and increasing pension costs. We discuss these issues below.

As a result of the increase in funding for CPS from the revised school funding formula, several ratings agencies adjusted their ratings of CPS debt. Fitch Ratings upgraded the Chicago Board of Education to BB- from B+ and changed the rating outlook from negative to stable in October 2017. In a statement, Fitch said, “prospects for restoration of operating balance and reserves have improved with the passage of a new state funding framework” and the “revised funding framework should improve the amount, timing and potential volatility of state aid to CPS.” Standard and Poor’s, Moody’s and Kroll’s all adjusted their outlooks on CPS debt from negative to stable.

On March 21, 2018, the Chicago Board of Education approved an additional $600 million of borrowing to refund existing bonds to move them from variable interest rates to fixed interest rates. As reported by the Chicago Tribune, the purpose of the bond issuance would be to refinance debt at a lower interest rate to produce short-term savings, which could help avoid budget cuts. Official details on the bonds will become available if and when CPS moves forward with the bond sale.

CPS has relied on short-term borrrowing in recent years to cover cash flow needs in order to make payroll and large debt service and pension payments while awaiting two lump sum payments from property taxes in August and March. In the past, CPS used its reserves to bridge the gap between incoming revenue and outgoing payments. However, CPS has depleted its budgetary reserves, and since FY2015 has used Tax Anticipation Notes, or short-term loans, to generate cash while awaiting tax revenues.

CPS also issued $387 million in Grant Anticipation Notes in FY2017 to cover periods of late grant payments from the State of Illinois. The District paid them off in September 2017.[5]

Short-term borrowing is an expensive alternative to using reserve funds to bridge revenue gaps. However, with depleted reserves and unreliable State funding, it is possible that CPS will need to rely on short-term borrowing again in fiscal year 2019.

The CPS Comprehensive Annual Financial Report for FY2017, which ended on June 30, 2017, was released in January 2018. This report includes audited year-end measures of the District’s general operating reserves, or fund balance. We look at the District’s unrestricted general operating fund fund balance, which consists of net assets in the operating fund that are not restricted, assigned or committed for any specific purpose by formal or informal action taken by the Board or other government officials.

The chart below shows the level of unrestricted general operating fund balance over the past five years. At year-end in FY2013, the fund balance was $819.0 million, then decreased over the next two years. In FY2016 CPS ended the year with an unusual negative unrestricted fund balance of $227.0 million. It declined even further to negative $354.9 million by the end of FY2017.

The FY2018 fund balance figures will not be available until after the end of the current fiscal year on June 30, 2018. However, CPS projects having a negative cash position during the majority of FY2018.[6] 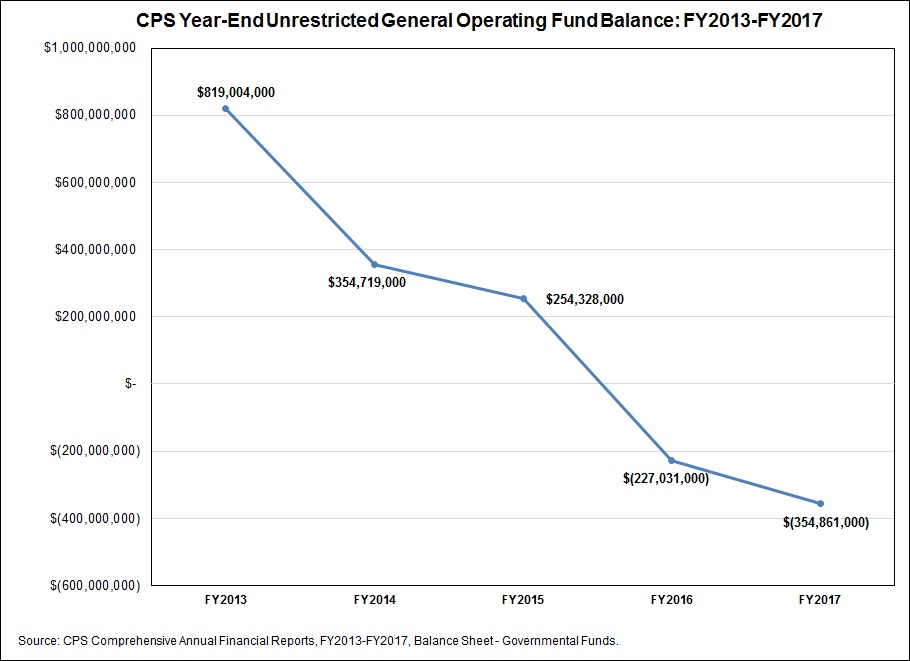 CPS’ depletion of its reserves is due to a consistent structural deficit wthin the District’s general operating fund. The following chart shows the year-end deficits CPS has had over the past five years. These figures reflect expenditures exceeding revenues each year between FY2013 and FY2017, hitting a low in FY2015 of negative $710.8 million and improving to negative $207.2 million by the end of FY2017.

In November 2017, the District expected its FY2018 general operating deficit to improve to negative $57.3 million, as long as the State grants expected for FY2018 are paid on a timely basis.[7] 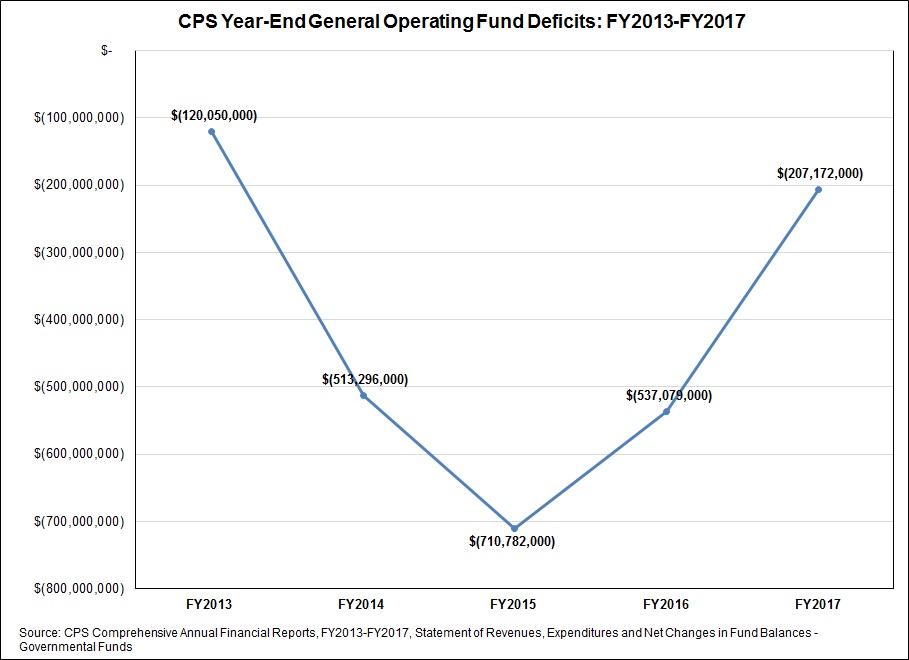 CPS owes a total of $784 million for its employer contribution to the Chicago Teachers’ Pension Fund in FY2018. The additional pension funding from the State of Illinois for the normal cost of the Chicago Teachers’ Pension Fund as well as the increase in the tax rate at which CPS is authorized to levy property taxes for purposes of funding teacher pensions helped boost funding to make this payment. According to CPS finance officials, the State contributed a total of $233 million, including $12 million for the State’s annual contribution and $221 million to cover the pension normal cost approved in Public Act 100-465. CPS estimates raising $405 million through its dedicated pension levy. This leaves a remaining balance of $146 million that CPS will need to contribute to the pension fund this year.

To be sure, these funding increases help. But CPS has looming pension payment increases ahead. The following chart from the CTPF actuarial valuation report for FY2017 illustrates the pension funding increases expected over a period of 40 years. 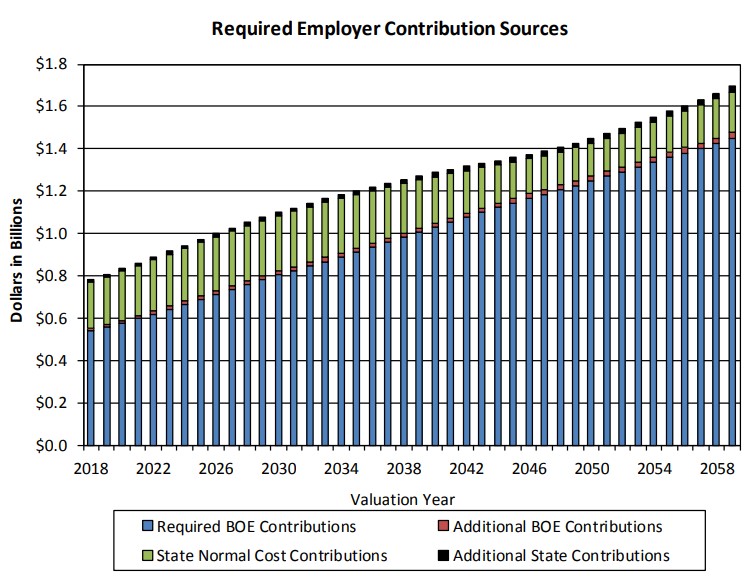 As described in a previous blog post, changes in assumptions on the pension fund’s actuarial liability resulted in an increase of nearly $1.1 billion and the actuarial funded ratio fell to 50.1% from 52.5% in FY2017. CPS is projected to owe $808.6 million for its employer contribution to the pension fund in FY2019, of which CPS will need to cover $569.7 million and the State of Illinois will cover the remainder.

The Civic Federation looks forward to the release of the final CPS FY2019 budget this summer.

[1] Two trailer bills were necessary to correct technical issues with P.A. 100-0465 and allow new state funding to go out to school districts. Public Acts 100-0578 and 100-0582 were approved over Governor Rauner’s veto in January 2018 and signed by the Governor in March 2018, respectively.