Data from the most recent audited financial statements of Illinois’ state and local government pension funds shows that the total unfunded liabilities for public employee pensions supported by the taxes of Chicago residents reached $14,896 per capita for fiscal year 2010. That is up from $10,037 per capita in FY2008.

The total unfunded liabilities of all the five State funds and ten Chicago-area funds reached $103.1 billion in fiscal year 2010.[1] Unfunded liability is the amount owed for both current and future pensions that is not covered by assets (see the Civic Federation’s Status of Local Pensions report for a more technical definition). Put simply, it is the amount of pension promises made for which there is not already money set aside.

If its unfunded liability is zero, a pension fund has enough assets to cover the pension promises that have been made and the funded ratio is 100%. The 2010 funded ratios of the pension funds supported by Chicago taxpayers ranged from a low of 26.3% for the General Assembly fund to a high of 73.8% for the Chicago Laborers’ fund. 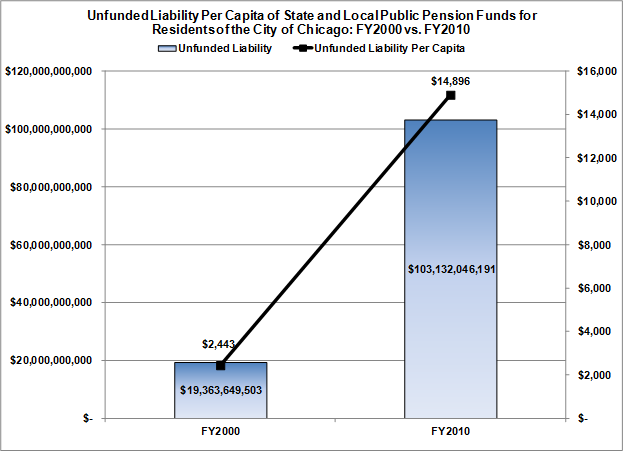 The unfunded liability per capita for the four City of Chicago pension funds alone was $5,473. The figure rises to $8,993 when the other Chicago area local government pension funds are added. 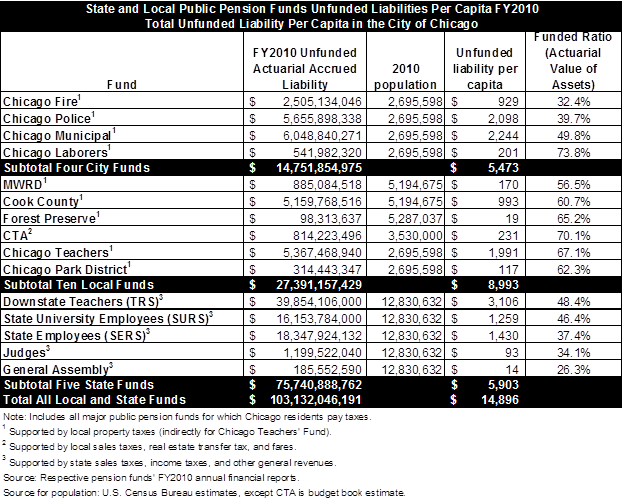