As the Civic Federation composes its forthcoming Status of Local Pensions Report, we have pensions on our minds. Here’s a quick round up of what’s happening with local pension funds in Chicago and across the State of Illinois, including status updates on commissions, results of pension obligation bonding and cost estimates of legislated benefit increases.

In January of 2008 the City of Chicago convened a task force to address its pension funding problems. The City of Chicago’s Commission to Strengthen Chicago’s Pension Funds is planning to release its report in February of 2010. Meanwhile, the financial health of the City’s pension funds continues to deteriorate. Out of the four city employee pension funds – fire, police, municipal and laborers – only the laborers fund is at a level considered financially healthy. As of FY2008, the last year for which data is available, the laborer’s fund has an actuarial funded ratio of 86.8%. The fire fund, with an actuarial value funded ratio of only 39.7% as of FY2008, has the lowest funded ratio of the four funds.

Pensions and property taxes share a special relationship as the City’s property tax levy is the primary funding source for the City’s four pension funds. The pie chart below illustrates the distribution of the City’s total proposed property tax levy for 2010 (taxes payable in 2011). Approximately 4.4% of the City’s proposed FY2010 property tax levy is for City Colleges bonds, and 9.3% is for the Chicago Public Library. Roughly 42.1% is dedicated to pension payments and 44.2% of the levy is for the debt service on City bonds. The bonds issued per the intergovernmental agreement with the Chicago Public Schools are included in this latter amount but are not itemized. The total City levy is $833.5 million. 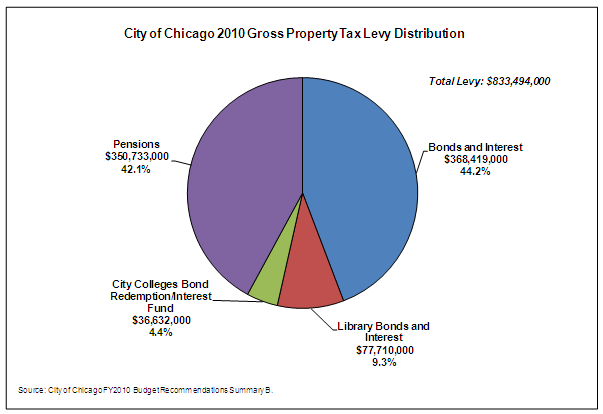 After nearing the precipice of insolvency, the State of Illinois legislature passed Public Act 95-0708 that restructured the Chicago Transit Authority’s employee pension system, implementing both benefit reforms and issuing a pension obligation bond to bring the fund back to a healthy financial state.

As of FY2008 the CTA’s actuarial value funded ratio for its pensions totaled 75.6%, increasing from 38.0% just one year earlier. P.A. 95-0708 required that no less than $1,110,500,000 in pension obligation bond proceeds be deposited into the retirement fund, and no less than $528,800,000 be deposited into a new Retiree Health Care Trust. The infusion of $1.1 billion into the retirement fund resulted in the aforementioned increase in the actuarial value funded ratio. As other units of government face mounting pension obligations, including Chicago Public Schools, the CTA model of benefit reform and cash infusion may be proposed by other units of governments in the coming years.

Benefit changes included allowing maximum pension of 75% of salary to be reached in 30 years, instead of 35, receipt of three years of creditable service while on disability, duty or occupational disease disability equal to the greater of 65% of salary or pension and 100% of salary for survivor’s annuity as a result of duty death.

A complaint often heard by municipalities is that the State legislature approves benefit increases that must subsequently be funded by the units of local government. The data provided in this report should be used by legislators to help understand the financial implications of their previous, and future, votes for increased pension benefits.