The two TIF districts, the Michigan/Cermak TIF and the Midwest TIF, are located on the near south side and west side of Chicago. This blog will focus on the two districts. For more on how TIF districts are extended, read last week’s blog.

Of the two districts, only one was set to expire in the near future. The Michigan/Cermak TIF was designated in 1989 and was set to expire on December 31, 2013. The Michigan/Cermak TIF is completely surrounded by other TIF districts: the large Near South TIF is directly to the north; the Calumet/Cermak TIF is to the east; and the 24th/Michigan TIF borders to the south and east. The following map shows the district’s boundaries. 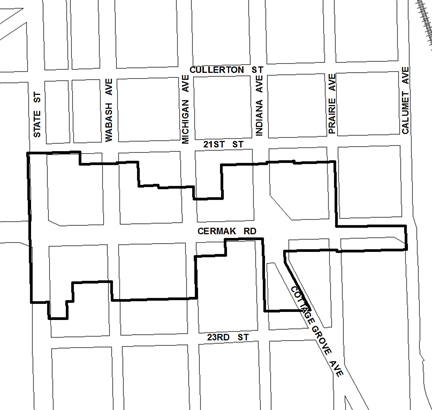 Between its designation in 1989 and the most recent available data, the increment EAV in the Michigan/Cermak TIF has grown from a base of $5,858,634 to $23,424,505 in 2011, according to the Cook County Clerk. In 2011 the district generated $958,218 in TIF revenue. The TIF’s stated goal is to, “support the development of anchor projects along Cermak Road that support the Near South Side community and the expansion of the nearby McCormick Place convention center.”

The reason the district is being extended is to support the City of Chicago’s “Elevate Chicago” plan, a project that intends, in part, to expand the McCormick Place convention center to include two new hotels and a sports arena/events center. According to published reports, TIF funds from several TIF districts in the area will be used to acquire the land where the hotels and arena will be built.

The Midwest TIF district was designated in 2000 and will expire in 2024 if SB20 is not enacted, but will be extended another 12 years beyond 2024 if the legislation is signed into law. The Midwest TIF is surrounded on most sides by other TIF districts and has two TIF districts embedded within its borders. The following map shows the district’s boundaries. 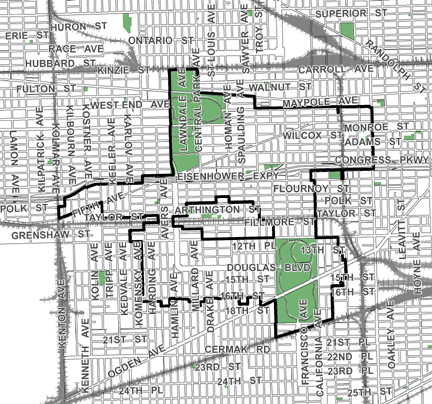 Between 2000 and the most recent available data, the increment EAV in the Midwest TIF has grown from a base of $98,090,835 to $398,408,410 in 2011, according to the Cook County Clerk. In 2011 the district generated nearly $16,382,324 in TIF revenue. The TIF’s stated goal is to, “foster the evolution of a planned and cohesive neighborhood containing a range of housing types, stores at the intersections of major streets, and a network of parks and open spaces.”

According to an overview of the Spring 2013 General Assembly session, the Midwest TIF is being extended to assist Mt. Sinai Hospital. Mt. Sinai is in the midst of a long-term development plan for its neighborhood called “Sinai Tomorrow.” This project is a collaboration between the City of Chicago, the Chicago Housing Authority (CHA) and the Sinai Health System, the parent organization to Mount Sinai Hospital. When complete, the development will include a new hospital and ambulatory care center for Sinai Health System and 300 restored or newly built mixed-income apartments in the Lawndale neighborhood of Chicago. In addition to providing TIF funds, the City of Chicago also participated, along with CHA and the hospital, in a land swap and transfer to meet the land needs for each organization under the community redevelopment plan.