On April 19, 2022, Governor JB Pritzker signed the State’s FY2023 budget, which consists of three bills, into law. The budget was passed nearly two months earlier than in previous years because the State’s primary election had been moved from its usual March date to June 2022 and the General Assembly adjourned early to accommodate members’ campaign schedules. The FY2023 budget includes significant amounts of increased revenue that were dedicated to some short-term tax and fee relief measures for Illinois families. Additionally, the FY2023 budget provides increased funding for education, human services, law enforcement and violence prevention programs. It also fully funds the statutory pension contribution and makes an additional $200 million payment to the Pension Stabilization Fund and allocates $312 million to rebuilding the State’s rainy day fund. Lastly, the enacted budget included $2.7 billion in American Rescue Plan Act (ARPA) funds for the repayment of federal advances to the Unemployment Insurance Trust Fund.

The Illinois Economic and Fiscal Policy Report includes significant upward revisions to the FY2023 projected operating revenues and proposes for an increase of nearly $1.5 billion over the enacted budget. The increase to the projection is due to income and sales tax collections exceeding what was budgeted through the first four months of the year. An increase to the annual transfer from the Income Tax Refund Fund of $1.28 billion combined with some other increases raised the total change to the base revenue projection to nearly $3.7 billion.[1] Federal revenues are increasing by $100 million to $4.1 billion due to the extension of the federal Public Health Emergency (PHE), which extends the enhanced Medicaid reimbursement rate. Lastly, the estimated FY2023 budget is now projecting to allocate $763 million in transfers from ARPA funds to reimburse the State for revenue replacement that was lost during in the pandemic, which is approximately equal to the use of revenue replacement funds in FY2022.[2] The following table compares the FY2023 enacted budget and the November estimate. 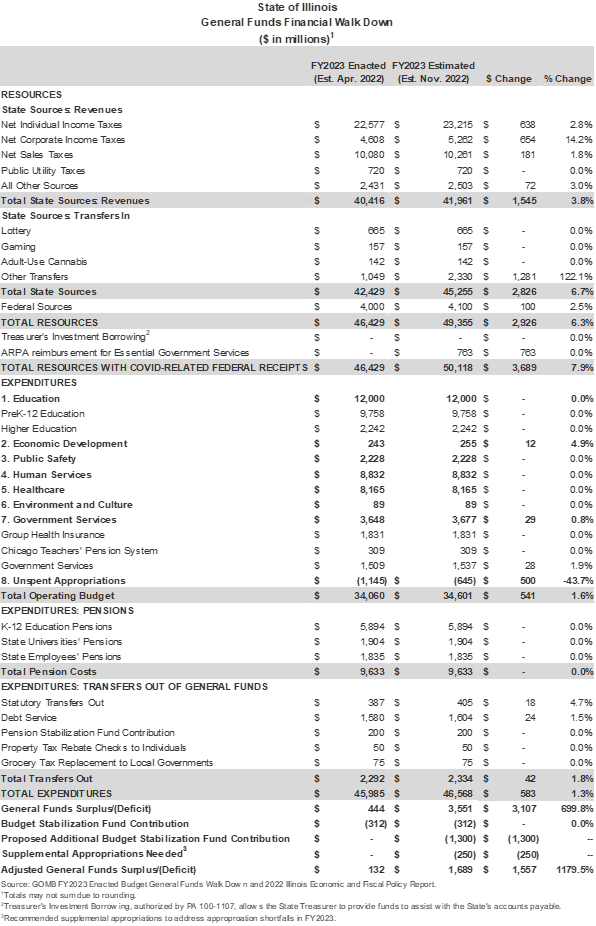 The November 2022 estimate projects $49.4 billion in General Funds resources, plus $763 million in ARPA revenue replacement funds, for a total of $50.1 billion. The General Funds support the regular operating and administrative expenses of most State agencies and are the funds over which the State has the most control. The operating budget also includes Other State funds, which accounts for activities funded by revenue sources that may only be used for specific purposes and the Federal Funds, which support a variety of State programs with federal revenues. The remaining revenues that are not included in the General Funds are restricted for specific purposes, shared through revolving funds between government agencies, held in trust or generally not available for discretionary spending by the General Assembly.

The FY2022 November estimate also increases General Funds expenditures by $583 million beyond the proposed $46.0 billion in the FY2023 enacted budget. The increase is due to several factors, including the extension of the public health emergency, which increases both federal Medicaid reimbursements and State Medicaid expenditures.[3] The Governor also makes recommendations for increased spending, such as $250 million in proposed supplemental General Funds spending, which includes additional funds for the Department of Innovation and Technology. Other increases in spending include $24 million for debt service due to the timing of debt issuances.

Overall, the estimated FY2023 budget includes an adjusted General Funds surplus of $1.7 billion, which is an increase of $1.6 million from the $132 million surplus that was in the FY2023 enacted budget. The Governor’s office proposed to contribute an additional $1.3 billion to the rainy day fund from the increased surplus for a total of $1.7 billion in contributions.

The Illinois Economic and Fiscal Policy Report bases its longer term revenue projections on two economic forecasts, a “pessimistic” scenario from September 2022 and a “baseline” scenario from October 2022. These projections incorporate the probability of a recession in 2023-2024 and recovery in 2025-2026, with a loosening of the labor market and decrease in personal consumption. The projections also include the ongoing impact of the gradual shift of the State sales tax on motor fuel purchases from the General Funds to the Road Fund, which will be fully implemented in FY2026. Federal reimbursements for Medicaid spending in FY2024 will be lower than FY2023 due to the drop off of the enhanced FMAP Medicaid match rate beginning in early 2023.

The Governor’s Office of Management and Budget (GOMB) projects that after budget surpluses in FY2023 and FY2024, given no change to expenditure trends, the State will see budget shortfalls again starting in FY2025 of $464 million, growing to $792 million by FY2028. GOMB also proposes a supplemental contribution to the rainy day fund of $1.3 billion in FY2023. Two weeks after the release of the Economic and Fiscal Policy Report, on November 29, the Governor, leaders of the Illinois General Assembly and other stakeholders from labor and major business groups announced an agreement to pay off the remaining $1.36 billion unemployment insurance loan balance. During the pandemic, the State borrowed from the federal government a total of $4.5 billion for the Unemployment Insurance Trust Fund to keep unemployment benefits flowing to jobless workers.[4] As noted above, some of the borrowing was paid off using ARPA funds as part of the FY2023 budget. The remaining balance will be paid off using funds from the projected FY2023 budget surplus. The full agreement was codified in Senate Bill 1698, which awaits the Governor’s signature.

Reducing the State’s deficit and creating sustainable balanced budgets will be a difficult task, particularly given the uncertainties of the economy due to inflationary and recessionary pressures post pandemic. However, the State’s progress toward paying off its unemployment debt, improving its budgetary reserves and making supplementary pension paymentsis a strong step in the right direction.