Click here to read an article from the Chicago Tribune about Governor Quinn’s signing of the bill.

This editorial in the Sun-Times echoes the Civic Federation’s position that while the reforms in SB 3538 are a good first step, more must be done to restore solvency to pension systems in Illinois.

On Thursday, December 2, 2010, the Illinois General Assembly followed up on public employee pension reforms passed in April 2010 (Public Act 96-0889) by passing a bill (Senate Bill 3538, House Amendment 3) to create a second tier of pension benefits for police and firefighters across the state. The bill now awaits approval by Governor Quinn.

The reforms create a new tier of pension benefits for public safety employees hired on or after January 1, 2011 and change employer contribution amounts. SB 3538 applies to five types of public safety pension funds:

This blog post describes changes to the Chicago Police and Fire Pension Funds. See the Illinois Municipal League for more information on the downstate and IMRF fund changes.

The major Chicago Police and Fire pension benefit provisions are shown in the table below. Two significant changes are the increase in the retirement age from 50 to 55 in order to receive full benefits (although required years of service are reduced from 20 to 10), and the reduction of final average salary from the highest 4 year average to the highest 8 year average, capped at $106,800 (indexed to inflation). The automatic annual cost of living adjustment (COLA) on a retiree’s annuity will change from 1.5% simple interest for employees born after January 1, 1955 to the lesser of 3% or one half of the increase in Consumer Price Index. 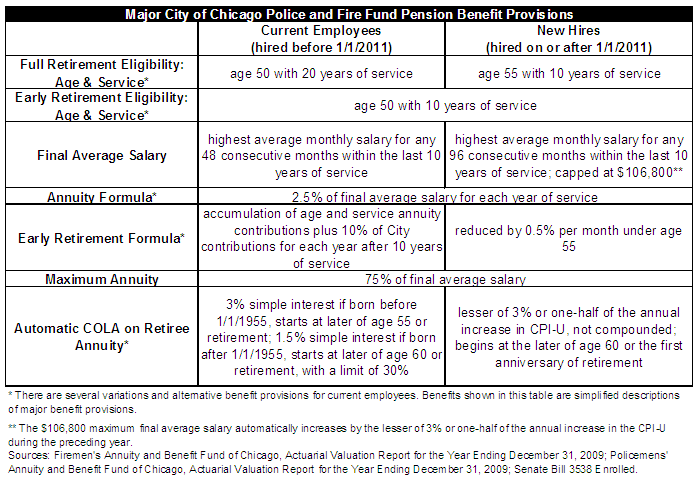 Employee contributions to the funds will remain at a total of 9.0% of pay for Chicago Police Fund members and 9.125% for Chicago Fire Fund members. SB 3583 will change the City of Chicago’s employer contributions significantly, however. The City’s contribution is currently a fixed multiple of the employee contributions made two years prior: a multiple of 2.26 for the Fire Fund and 2.00 for the Police Fund. These multiples have provided much less than is needed to adequately fund the plans for at least the last ten years (see this blog). SB 3583 would require the City to begin in 2015 making contributions sufficient to bring the funded ratio of each fund to 90% by the end of 2040, using a level percentage of payroll and projected unit credit method (see the Civic Federation’s Status of Local Pensions report for description of these methods). If the City fails to make its required contributions, the Illinois Comptroller would withhold State fund transfers to the City.

City officials have stated that this funding requirement would cause a 60% increase in Chicago’s property tax levy. Illinois Senate President Cullerton has stated that the legislature will consider a trailer bill in January to address the City’s concerns over this funding schedule.