Tax revenues that states depend on to fund operations continue to decrease, dropping at least $119.7 billion nationwide in the most recent fiscal quarter. A study released by the Nelson A. Rockefeller Institute of Government on November 23, 2009 also shows that Illinois continues to be one of the hardest hit by revenue losses during the current recession. Illinois was one of only ten states that showed double-digit declines in all three major revenue categories, reporting an 11.7% loss in income tax revenue, a 28.4% drop in corporate income tax and a 13.1% decrease in sales tax revenue between July and September of this year. The report was limited to 44 states for which comparable data were available.

The report analyzes the actual revenues collected in the third quarter of the calendar year, which is the first quarter of Illinois’ fiscal year that runs from July 1 through June 30. The researchers found that nationally the three largest contributors to state tax revenue – personal income tax, corporate income tax and sales tax – collectively dropped 10.7% from the same period in the previous year. Illinois had the highest percentage year-to-year sales tax losses in the Great Lakes Region, falling 13.1%, the average was 9.8% for Illinois, Indiana, Michigan, Wisconsin and Ohio. Illinois was also above the regional average of 26.7% for corporate income tax losses and below the 12.8% average drop in personal income tax. The State had a higher overall loss than the national average for all three sources, totaling 12.6%.

The actual figures included in the report could indicate more trouble to come for Illinois. The State predicted only a 4.5% decrease in total revenues for FY2010 in its enacted budget. The following chart shows a comparison of FY2009 estimated revenues to the projections the State used for its FY2010 budget: The budget included losses for personal income tax, corporate income tax and sales tax that were 0.2%, 33.8% and 5.6% lower than FY2009 respectively. However, if the actual downward trends reported by the Rockefeller Institute for Illinois continue for the remaining three quarters of the State’s current budget year, these combined revenues could fall another $1.5 billion, or 7.0% of the projected $21.6 billion in state generated revenues for FY2010 shown above.

In October David Vaught, director of the Governor’s Office of Budget and Management, announced that due to unemployment and casino losses, state source revenues would drop $900 million more than originally budgeted for the current year. The revenue modification included a reduction of $850 million in personal income tax, but this is much lower than the potential losses indicated by the trends in actual FY2010 tax receipts included in the Rockefeller Institute’s report.

Any additional decline in revenues could be very problematic as the State approaches the FY2011 budget, which the Governor is due to release on February 17, 2010. Including the $900 million revenue adjustment and the increase in state spending approved during the General Assembly’s October Veto session, the State is already facing a deficit of at least $4.8 billion at the end of the fiscal year. The following chart shows the calculation of the current budget deficit: 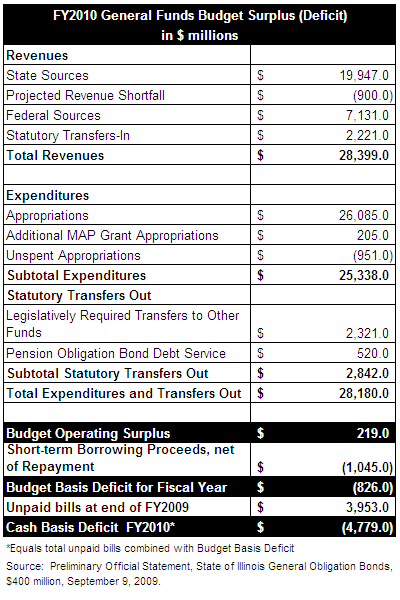