In a report released last week, the Civic Federation and the Illinois Supreme Court presented a first-of-its-kind statewide analysis of the total amount of bond payments collected in criminal cases and how those dollars are distributed at the conclusion of a criminal case. Beginning January 1, 2023, judges may no longer order someone accused of a crime to pay a monetary amount in order to secure their release from pretrial detention. In anticipation of this change in policy (enacted through Public Act 101-0652, or the SAFE-T Act), the Illinois Supreme Court Pretrial Practices Implementation Task Force set out to measure how much of a financial impact the elimination of money bond will have on counties, and specifically on circuit court clerks who will no longer retain up to 10% of bond deposits as bond processing fees.

In current practice in criminal cases, it is common for a judge to set a cash bail at a criminal defendant’s initial appearance before the court, which the person then must pay in order to secure their release from jail while the case is pending. After a defendant or someone on the defendant’s behalf pays the deposit for release, the payment is held until the conclusion of the criminal case. In the event of a conviction, the court may order a number of fines, fees and assessments to be paid, which are often deducted from the bond payment. After all court obligations have been met, clerks of circuit courts are authorized by Illinois statute to retain 10% of the deposited bond amount as “bail bond costs” (referred to as bond processing fees in this analysis) and return 90%, except in Cook County where the court clerk may only retain up to $100 of each bond deposited. After fines and fees are applied from the bond payments, the remaining amount is refunded back to the person who paid the bond.

Findings of the report are based on data provided by 95 of Illinois’ 102 counties regarding cash bond payments processed annually between 2016 and 2020. It should be noted that 2020 is likely not a representative year due to court processing slowdowns caused by the COVID-19 pandemic. See the Methodology and Data Limitations sections of the report for details about the information included in the analysis and the limitations and challenges with data received.

The analysis found that statewide more than $150 million in bond payments were processed at the conclusion of criminal cases in 2016, falling to just over $120 million in 2020. On average, Cook County accounted for about 40% of these totals. 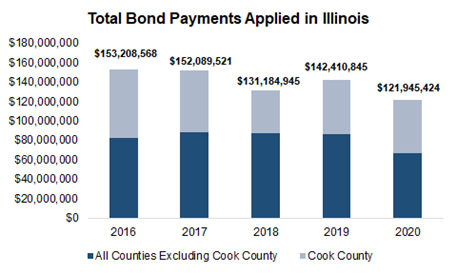 These total bond amounts processed were distributed toward a variety of purposes. While it is commonly assumed that bond payments are returned to the defendant at the conclusion of a case, the analysis found that the majority—70%—were used to satisfy fees and assessments, 10% went to fines and restitution payments, and only 20% were refunded back to the person who paid the bond (and in some cases paid directly to private attorneys). However, when excluding Cook County (which was unable to provide refund amounts and restitution amounts), 65% of bonds applied were distributed to court-ordered fees and assessments, fines and restitution, and 35% were returned to the person who posted the bond or paid to private attorneys.

Within the 95 counties that provided data for the analysis, circuit court clerks collected a total of $14.9 million in bond processing fees in 2016, which fluctuated over the five-year period examined and decreased to $4.8 million in 2020. Cook County contributed to a large portion of these figures in 2016 through 2018, and accounted for $4.8 million on average across the five-year period. The remaining 94 counties combined collected an average of $6.8 million in bond processing fees over the same period. 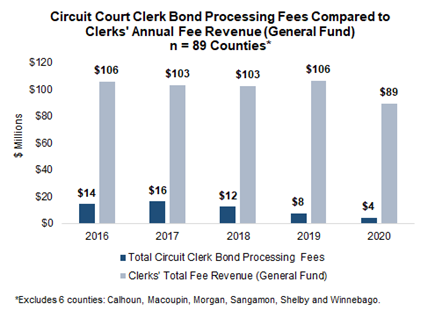 Detailed numbers for bonds processed and distributed in every county can be found in the All Counties Table in the full report.

The findings of the report shed light on how bond payments are distributed and used. Approximately 70% of bond payments were used to satisfy court-ordered fees and assessments that support a variety of government functions at the state, county and municipal level. Of those fees, the report estimates that 58% of bond payments were distributed to county fees that support county operations including circuit court clerks’ special purpose funds, state’s attorneys, public defenders, probation and pretrial departments, electronic monitoring, sheriffs and other specific county functions. The remaining 42% of bonds applied to fees were directed to other state or municipal fees. The number of fees varies widely by county.

The SAFE-T Act does not alter the ability for fees, fines, and assessments to be imposed on those convicted of crimes in Illinois. However, the courts will no longer be able to order the payment of fees, assessments and fines to be deducted from bail bond payments. Because of this, it will be important to consider and monitor the potential impact this change may have, such as delayed payment to private attorneys or violations of probation or extended probation terms stemming from non-payment of fines, fees or restitution. There will also need to be consideration of what government functions were financially supported with the bond processing fees, and what other sources of revenue can be used to support these activities.

The elimination of cash bond in Illinois brings the state in line with best practice guidance from national organizations including the National Institute of Corrections and National Task Force on Fines, Fees and Bail Practices, which direct that pretrial release should be non-monetary and involve the least restrictive conditions necessary to ensure the defendant will return to court. The National Task Force on Fines, Fees and Bail Practices’ Principles on Fines, Fees and Bail Practices also directs that courts should be “entirely and sufficiently funded from general governmental revenue sources to enable them to fulfill their mandate” and that “core court functions should not be supported by revenues generated from Legal Financial Obligations.” Legal Financial Obligations are defined as fines, costs, fees, assessments and restitution in civil and criminal cases.

It is also important to note that bond payments represent only a portion of the total fees and assessments that are collected by the offices of circuit court clerks across all circuit court divisions. The Administrative Office of the Illinois Courts has begun to collect and publish county-level reports on the amount of fees, assessments and fines collected annually in civil and criminal cases, and reconvened a Statutory Court Fees Task Force to examine the fees imposed on civil litigants and criminal defendants and review the implementation of the Illinois Criminal and Traffic Assessment Act.

[1] Six counties are excluded from this portion of the analysis. Five are excluded due to the timing of their fiscal years, which differ significantly from the calendar year: Calhoun, Macoupin, Morgan, Shelby and Winnebago. Sangamon County is also excluded due to very low clerk fee bond amounts that could potentially skew the data.