The park districts examined in this blog are stand-alone special purpose governments that provide public parks and recreation services and exclude park departments operated by another unit of government such as a municipality. The Civic Federation uses the number of park districts in the State reported by the Illinois Comptroller’s Office as opposed to the U.S. Census Bureau’s 2012 Census of Governments. The Census Bureau uses a broader definition of a parks and recreation district, which includes conservation districts, forest preserve districts and special recreation districts, and therefore reports 397 units, 49 more than the Comptroller’s count of 348.

Number of Park Districts by County 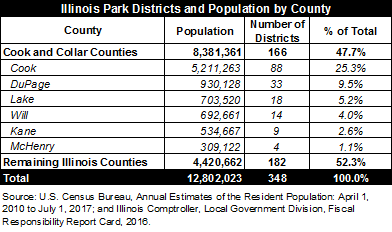 While there are park districts located in 75 of the 102 counties in Illinois, the majority of park districts are concentrated in a small number of counties. Eleven counties account for 202 of the 348 park districts, or 58.0% of the districts in the State. In addition to Cook, DuPage, Lake, Will, and Kane they include: 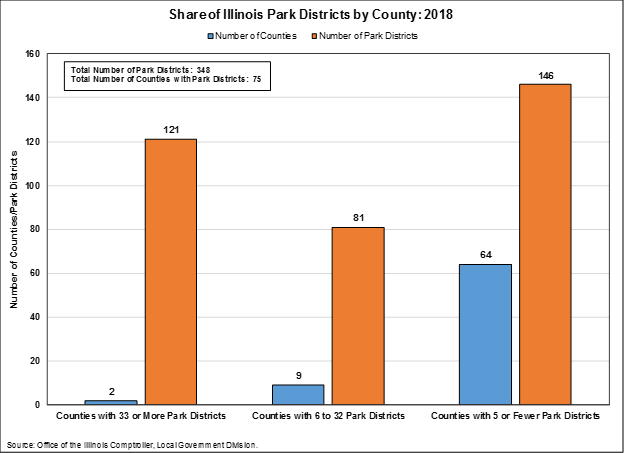 There are 27 counties that do not have any stand-alone park districts within their boundaries. The largest of these is Jefferson County with 38,179 residents. The following table lists these counties. 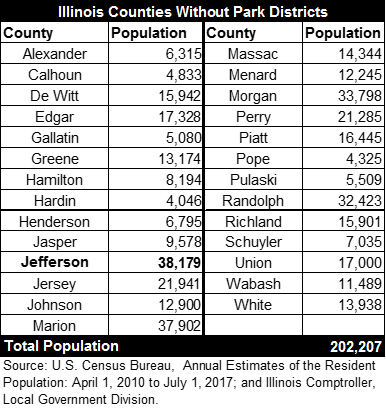 Some park districts located in Cook County serve the residents of multiple municipalities and unincorporated areas or only a portion of a municipality. For instance, Pleasant Dale Park District covers parts of Burr Ridge, Countryside, Indian Head Park and Willow Springs as well unincorporated areas of La Grange and Hinsdale.[3] Similarly the Homewood-Flossmoor Park District serves both the communities of Homewood and Flossmoor.[4]

There are municipalities in Cook County that have a parks department and therefore are not included in the list of park districts.[5] Evanston has its own parks and recreation department in addition to two other stand-alone park districts within its municipal borders. The Ridgeville Park District provides park services in much of Evanston’s southern portion, whereas the Evanston Lighthouse Park District maintains a lighthouse and a small area surrounding it on the coast of Lake Michigan.

A forthcoming report by the Civic Federation will provide similar analysis on all local governments in Illinois.

An Examination of Counties in Illinois

An Examination of the Finances of Illinois Community Colleges