Chief Judge Timothy Evans’ Office began posting the new data on the Cook County Circuit Court’s website in early May. A dashboard with seven performance measures is currently available for the first quarter of 2018 and the last quarter of 2017.

The initial data provide more official evidence of a trend that has been cited in press releases and observed by court-watchers: far fewer defendants are now required to make cash deposits to stay out of jail while awaiting trial and the cash amounts are much lower for those who still have to make payments.

The shift away from cash bail orders began in the fall of 2013, after Cook County Board President Toni Preckwinkle requested assistance from the Illinois Supreme Court to improve operations in bond court. Bond court judges either set bail—conditions including payment of cash that allow defendants to stay out of jail before their cases are resolved—or deny bail and require defendants to go to jail. For years, criminal justice experts have maintained that high money bail amounts in Cook County kept poor, low-risk defendants in jail while allowing wealthier, more dangerous individuals to go free.

After the high court’s intervention, Chief Judge Evans in 2015 introduced a formula called the Public Safety Assessment (PSA) to help judges more objectively evaluate the risk that released defendants would commit new crimes or not make court dates. The most significant change occurred in September 2017, when the Chief Judge implemented a policy to limit cash bail to affordable amounts and prevent detentions due solely to lack of sufficient cash.

The Federation’s report called on both the Chief Judge and the Cook County Sheriff to make information more readily available to the public.

According to the new statistics posted by the Chief Judge’s Office in May, 25.6% of the 6,266 defendants facing felony charges who appeared in Cook County bond courts between January and March 2018 received deposit bonds, or D-Bonds, which require upfront payment of 10% of the bail amount.  As shown in the following chart, about half—50.8%—received recognizance bonds or I-Bonds, meaning that they were released without requiring any upfront payment, and 16.3% were ordered to the Sheriff’s electronic monitoring (EM) program, in which defendants are confined to their homes and required to wear electronic tracking devices. The remaining defendants were denied bail. These numbers apply to the vast majority of defendants who were screened for risk using the PSA. 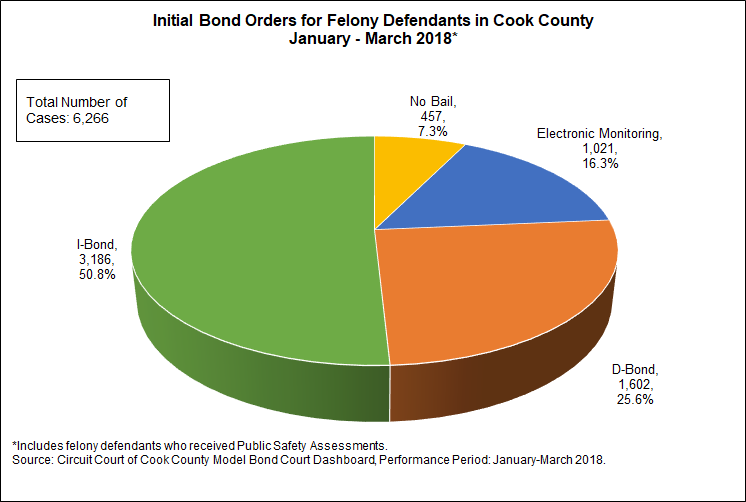 The Chief Judge’s website does not provide data from earlier periods for comparison, but other information shows that the composition of bond orders has changed significantly over the last five years. In its report, the Civic Federation found that from 2011 through the Supreme Court intervention in 2013, only 13% of defendants received orders allowing release without a cash payment. These figures were based on data that may not be strictly comparable but are believed to indicate the general trend.

An April 2016 report by the Sheriff’s Office showed that the average D-Bond amount ordered was $71,878 and the median amount was $40,000 during 30 sessions of the County’s main bond court in February and March of that year. The next chart shows the D-Bond amounts in the Chief Judge’s latest dashboard. Of those who were required to make upfront payments, 53.5% were ordered to pay $1,000 or less and 38.4% had to pay $500 or less.

The dashboard also provides information on the outcome of bond court appearances during a given quarter: the percentage of defendants with various types of bond orders who were in jail at the end of the period. For example, 45.9% of individuals who received D-Bonds during the first quarter of 2018 were in jail at the end of March. The Chief Judge’s data show that 64.8% of defendants ordered to EM during the first quarter remained in jail, but the Sheriff’s Office has raised concerns about the accuracy of the numbers.

As discussed in a previous blog post, Cook County Sheriff Tom Dart’s office began posting daily reports in December 2017 showing the number of detainees in each jail building and in the community. The reports have since been expanded to include gender, race and age of individuals under the Sheriff’s custody.

The number of detainees began to decline in late 2013, but the decrease accelerated dramatically after the September 18, 2017 implementation of the Chief Judge’s cash bail policy. The chart below shows jail population by month since March 2013. The total number of detainees in both the general population and “behind the walls” alternative programs declined from 11,100 in August 2013 to 7,490 the day before the new policy took effect. After that, the population dropped by 25% to 5,591 at the end of December and stood at 6,186 on May 10, 2018. 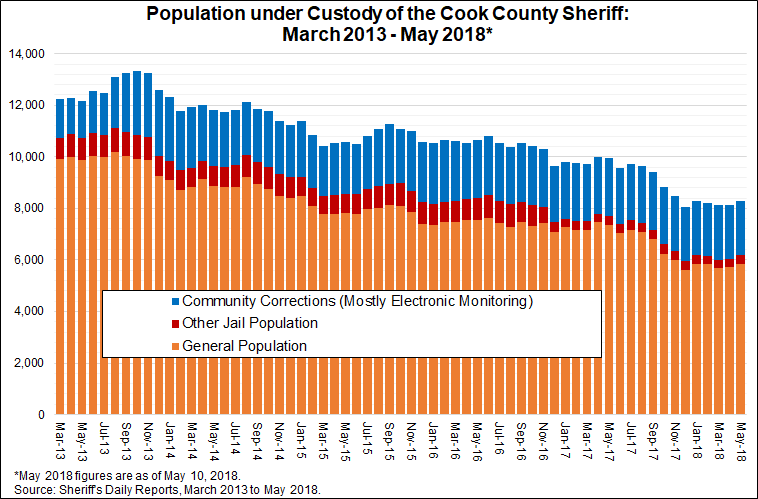 The Illinois Department of Revenue recently announced that the final equalization factor for the Cook County 2019 property assessment year (taxes payable in 2020) is 2.9160. Each year the Illinois...