Amid increased attention to the number of detainees at Cook County Jail, more information about the size of the jail population is now available on the Sheriff’s website.

In December 2017, Sheriff Tom Dart’s office started posting daily reports showing the number of detainees in each jail building and in the community. Prior days’ reports remain on the website, allowing visitors to track the jail population—at least for the past month.

The daily report information was previously distributed to Cook County officials but not easily accessible to the public. The website formerly had only three lines of population data: total, “behind the walls” and community corrections. The daily numbers were replaced each day, leaving no historical record.

The issue is particularly relevant because of new policies related to bond court that appear to have significantly reduced the number of detainees. The Federation’s report called on both the Sheriff and the Chief Judge of the Cook County Circuit Court to make information more readily available to the public.

The Sheriff’s Office said the decision to post the daily reports was part of a redesign of the office’s website that was in the works long before the Federation report was published. The new website provides the technical capacity to make the data available, officials said.

The Sheriff’s expanded disclosure comes as the confined jail population has fallen to its lowest level in decades, according to officials, who said past record keeping inaccuracies made it impossible to cite a precise date. As discussed in the Civic Federation report, the number of detainees began to decline in late 2013, but the decrease accelerated dramatically after the September 18, 2017 implementation of a new court policy that curbed the use of cash bail. For defendants who can safely be released, the policy is intended to limit money bail to affordable amounts and prevent detentions due solely to lack of sufficient cash. 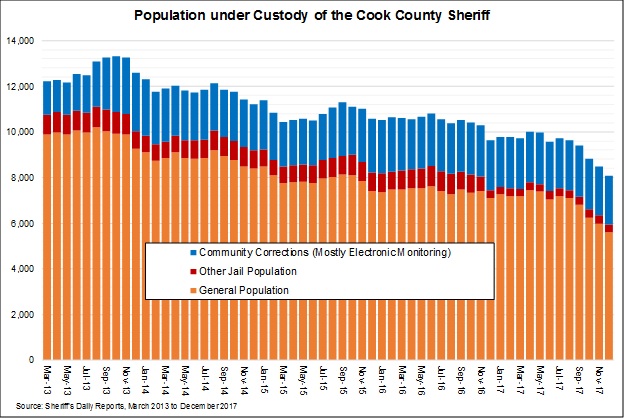 The decline in the confined jail population has not been offset by any increase in electronic monitoring. In fact, the number of defendants in community corrections programs (all but a few of whom are on electronic monitoring) has dropped slightly from 2,300 to 2,169 since the new bail policy was implemented.

The numbers above show a major decline in the confined population, but more information is needed to understand fully the reasons for the decrease and its potential impact on the community.

For example, after the Chicago Sun-Times published an article about the recent reduction in the jail population, a reader expressed concern that more defendants were being released on gun charges. Data showing the percentage of detainees by highest charge before and after the new policy could help demonstrate whether the reader’s concern is supported by evidence.

The Sheriff’s Office has said that the new cash bail policy has not affected the detention of dangerous defendants. Through November 30, about 7% of released defendants had been charged with new crimes and 10% had failed to appear for all their court dates, according to Chief Judge Timothy Evans’ office. However, comparable statistics for prior periods have not been made available.

The Sheriff’s Office plans to post additional information, including data on the race and sex of detainees in the next few weeks. There are also plans to show the share of individuals charged with violent and non-violent offenses and statistics on average length of stay in the jail.

In October 2017, another Cook County criminal justice agency, the State’s Attorney’s Office, published its first data report, along with the underlying data. The report provides information on felony cases handled in 2016, including type of criminal charges by race of defendant and the resolution of cases by category of offense. State’s Attorney Kim Foxx has said that the report will be updated annually and that future reports are expected to track the outcome of individual cases from initiation through sentencing.

Criminal justice reform advocates, including the Chicago Appleseed Fund for Justice, praised the expanded disclosure by the State’s Attorney’s Office. However, advocates also urged the State’s Attorney to release quarterly, real-time felony data for 2018; sentencing recommendations and outcomes for adult felony cases; and data on misdemeanors and juvenile prosecutions.

The Illinois Department of Revenue recently announced that the final equalization factor for the Cook County 2019 property assessment year (taxes payable in 2020) is 2.9160. Each year the Illinois...