Mayor-Elect Rahm Emanuel and the newly elected Chicago City Council face a host of major financial challenges. One of the hardest problems to solve will be the pension crisis. As a result of recent state legislation, the City now faces two distinct pension problems: two of its four funds are still expected to run out of money by the year 2030 while the other two funds are scheduled to be rescued from insolvency but at a very steep cost to the City.

The City of Chicago maintains four employee pension funds: the Fire, Police, Municipal and Laborer’s Funds.[1] In April 2010 the City’s Commission to Strengthen Chicago’s Pension Funds reported that the Police and Fire pension funds were likely to run out of assets within ten years if nothing was done.[2] The Police and Fire pension funds were only 43.6% and 36.5% funded in FY2009 on an actuarial value basis; the funded ratio for the Municipal Fund was 57.0% and the Laborers Fund was 79.4%.[3] A funded ratio below 80% is a cause for concern as it raises questions about the ability of the government to adequately fund its retirement systems over time. 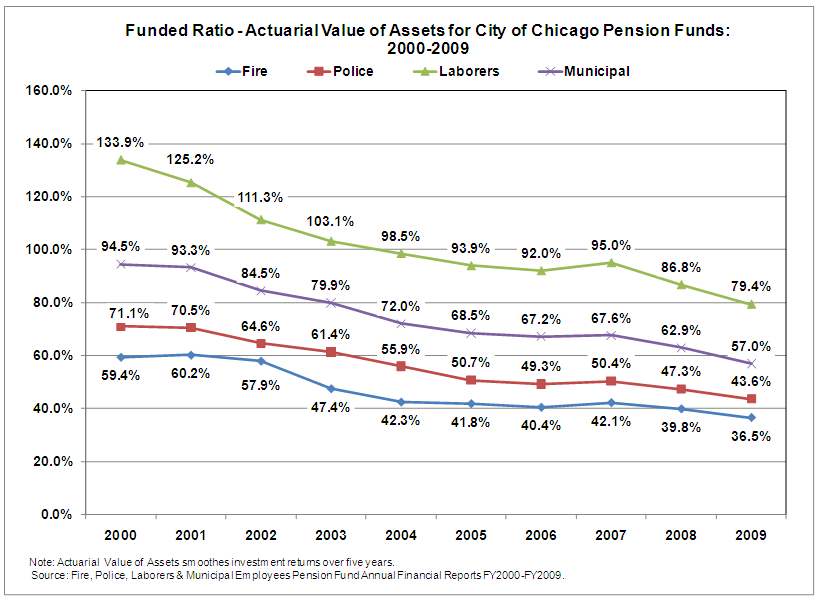 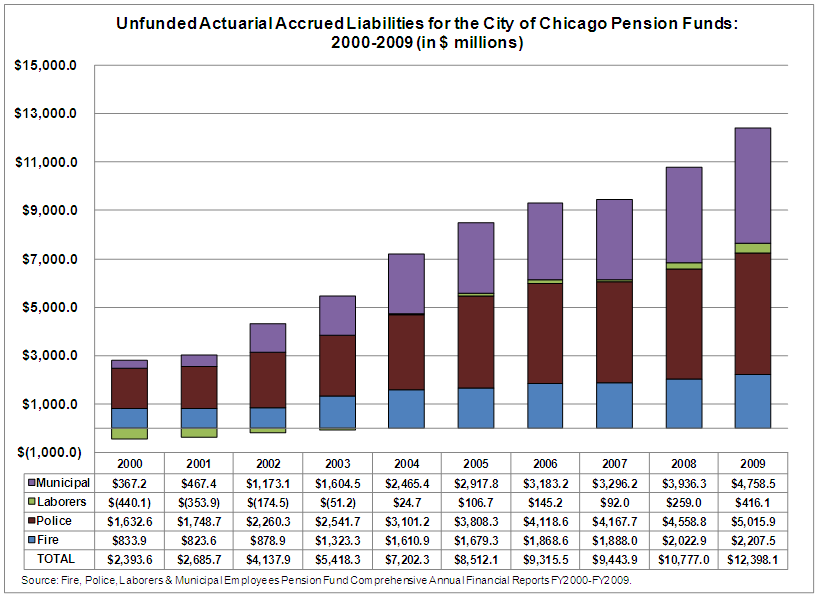 The City’s pension crisis has been caused largely by consecutive years of contributions that were insufficient for the level of benefits promised. The crisis was exacerbated by significant investment losses in FY2008.[4]

The Commission to Strengthen Chicago’s Pension Funds calculated that restoring the pensions to a 90% funded ratio in 50 years would require an additional $710 million contribution each year, growing with inflation, beginning in FY2012.[7] This amount exceeded the City’s $654.8 million FY2011 preliminary budget deficit. The City’s own Commission stated the urgency of the situation clearly:

“The problem worsens with each passing year, as the deficit grows and becomes more expensive to fix. It is important to address this problem effectively and quickly. If we fail to act, the pension funds will begin to run out of assets in a decade or less.”[8]

The Illinois General Assembly took action on Chicago’s Municipal and Laborers’ pension funds in April 2010 and on the Police and Fire pension funds in December 2010. Public Acts 96-0889 and 96-1495 created reduced benefit tiers for new members of the City’s four pension funds hired on or after January 1, 2011. Over time these benefit changes for new hires will slowly reduce liabilities from what they would have been as new employees are hired and fewer members remain in the old benefit tier.

1) the Municipal and Laborers’ funds are still on a path to deplete their assets within twenty years if nothing more is done; and

2) the Police and Fire funds are no longer on a path to insolvency but the mandated increase in statutory employer contribution will require an enormous additional expenditure beginning in 2015.

As discussed in a previous blog post , the unprecedented public health emergency brought on by coronavirus has led local governments in Illinois to enact...