Measuring The Productivity Of CTA Operations

The Civic Federation recently released its analysis of the CTA’s FY2017 Budget. The Civic Federation supports the Chicago Transit Authority’s FY2017 operating budget of $1.52 billion because it holds base fares flat and continues to make strategic capital investments despite ongoing state funding uncertainty.

As part the Civic Federation’s annual analysis of the CTA budget, the Federation uses two measures to assess CTA’s productivity over time: labor cost per actual unlinked passenger trip and operating expense per passenger mile.[1] The data used to calculate the productivity measures is obtained from the annual budget documents. In order for the CTA to be eligible for grant funding from the Federal Transit Administration, the Transit Authority must self-report certain data to the National Transit Database program, including operating expense per passenger mile.[2]

Between FY2013 and FY2017, productivity has declined because ridership, which fell by 1.9% on average each year, has not kept pace with labor costs. Those costs grew by 2.6% on average each year. As a result, the ratio has steadily increased over the five-year period, rising from $1.79 in FY2013 to $2.12 projected in FY2017. The decrease in ridership was reportedly the result of track construction and increased rates in fare passes in FY2013, extreme winter weather in FY2014 and FY2015 and increased competition from alternative transit operations such as Uber and Divvy and low fuel prices in FY2016 and FY2017.[3] The labor cost per unlinked passenger trip is expected to increase between FY2016 and FY2017 by $0.07 from $2.05 to $2.12. This will be due to a 2.5% increase in labor costs compared to a 0.7% decrease in ridership over the previous year. 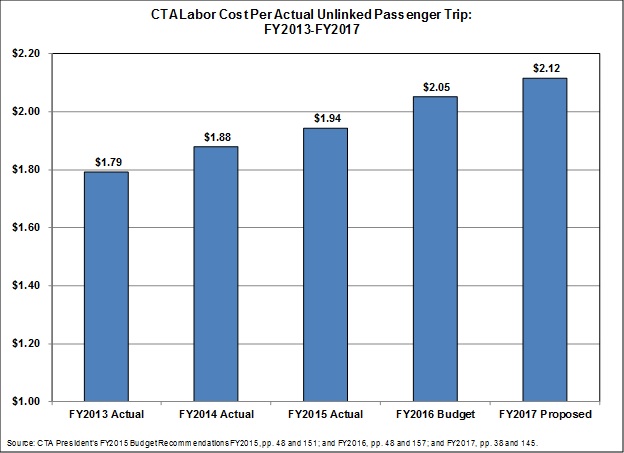 Another indicator that provides information about the productivity of the CTA’s operations is operating expense per passenger mile for bus and rail service.[4] The latest data available for this indicator is provided for 2014 by the Federal Transit Administration’s National Transit Database Program. 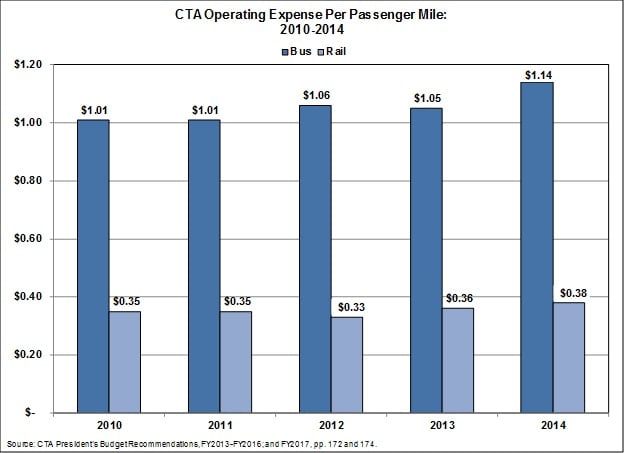