As the City of Chicago and Cook County prepare their budgets for the upcoming 2018 fiscal year, their sales tax estimates show the impact of a provision approved as part of the State of Illinois FY2018 budget that holds back a 2.0% administrative fee on locally imposed sales taxes.

As part of the State budget approved by Illinois lawmakers on July 6, 2017, the Budget Implementation Bill, Public Act 100-0023, established a new 2.0% sales tax administrative fee that the State will retain from sales tax proceeds that otherwise would have gone to local governments. Instead those monies will be transferred to the Tax Compliance and Administrative Fund. The fee is meant to cover the State’s cost of collecting and distributing sales tax revenue to local governments.

According to the Illinois Municipal League, the Illinois Department of Revenue estimates that 2.0% of local government sales tax collection statewide equals $60 million annually.

The table below provides a comparison among the composite sales tax rates in Chicago, Cook County and the surrounding collar counties. For example, the total composite sales tax rate in the City of Chicago is 10.25%, although as shown in the table, portions of that composite rate are actually allocated to several different governments. The State of Illinois collects a 6.25% sales tax statewide, of which the State keeps 5.0%, municipalities receive 1.0% and counties receive 0.25% (with the exception of Cook County, where the 0.25% portion is allocated instead to the Regional Transportation Authority). The revenues the State shares with municipalities, counties and the RTA will not be reduced by the 2.0% service fee. In addition to the 6.25% statewide rate, some local governments including Cook County, municipalities and the Regional Transportation Authority have the authority to impose additional sales tax rates. Revenues from those additional sales taxes will be impacted by the 2.0% service fee. 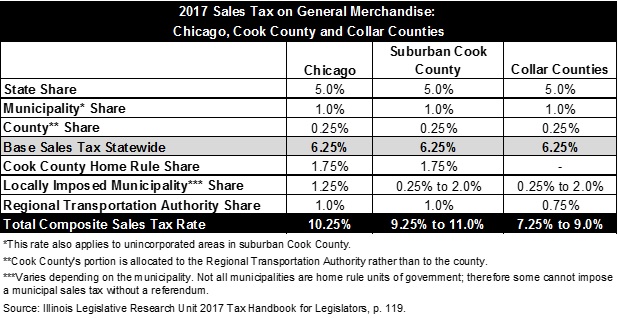 Other municipalities in Cook County and throughout the State will likewise be impacted by the administrative fee. With sales tax revenues already reportedly experiencing decline due to stagnant economic growth and an increase in online sales, some local government leaders have said that the administrative fee is burdensome, as reported here, here and here.

A bill recently introduced in the Illinois House proposes a reduction of the administrative fee. House Bill 4101, sponsored by Representative Anthony DeLuca, would reduce the fee from 2.0% to 1.0%. The bill represents a proposed compromise, acknowledging that there may be a cost to the State to collect the locally imposed tax, but also would restore half of the revenues local governments would otherwise lose. The bill was introduced on September 27, 2017 and could be considered as soon as during the veto session, which starts on October 24, 2017.

Helpful Link: Civic Federation 2017 Report on Consumer Taxes in the City of Chicago

[2] Communication between the Civic Federation and the City of Chicago on October 17, 2017.

The City of Chicago expects year-end general operating revenues to be 20.6% below budget by the end of the current 2020 fiscal year, according to the City’s FY2021 budget proposal . As described in a...