Korshak Settlement and the RHBC

Since 1988 the City of Chicago and its four pension funds have been party to the settlement of City of Chicago v. Korshak regarding how much the City, the funds and annuitants pay for healthcare. The City pays for a portion of the retiree healthcare premiums and the pension funds subsidize part of the annuitant portion of the premium, with retirees paying the balance of the premium costs.

On Monday, the RHBC released its recommendations report  to the Mayor. As previously stated by the Commission, the report does not make any specific recommendations as to how the City should proceed regarding retiree healthcare, but instead offers a series of options. These proposed options include: 1) continuing to provide retiree healthcare benefits at current support levels; 2) continuing to provide benefits at reduced support levels; and 3) eliminating City support for retiree healthcare benefits. The report additionally gives background on the City’s history of the court case arising from the City of Chicago’s provision of other post employment benefits (OPEB), as well as an analysis of current enrollment and costs.

In its report, the Commission concludes that the first option, continuing to provide retiree healthcare at the City’s current level of support, is not financially viable. If Settlement Plan were continued as is, the Commission projects the City’s annual payouts (cash flow) for retiree healthcare benefits would grow from $194.4 million in FY2014 to $540.7 million in FY2023. 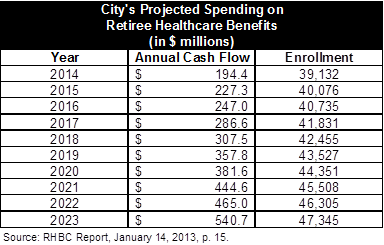 Included in the Commission’s analysis are actuarial projections reflecting how changes to the Settlement Plan would affect the City’s reporting of its OPEB liability in its annual financial statements. Because actuaries previously assumed the City’s retiree healthcare plan would end on June 30, 2013, the City’s total reported OPEB liabilities have fallen in recent years, to a total of $390.6 million, as of FY2011. However, if the City continues its retiree healthcare plan, it will report increased liabilities in future financial statements. Actuaries estimated that if the City were to fully continue the Settlement Plan under current provisions, the OPEB liability would increase to $2.1 billion by the end of FY2013. As shown below, various modifications were explored to reduce the amount to between $463.8 million (continuation of coverage at 40%, ending all coverage in 2023) and $1.9 billion (full continuation of coverage at 40%). (Click to enlarge.) 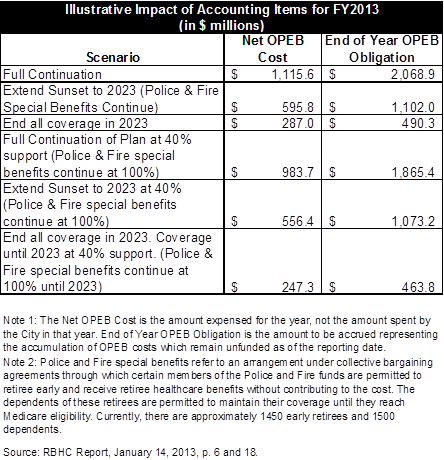 The report also explores the second option regarding the City’s future coverage of retiree healthcare, continuing to provide benefits at reduced support levels, in a series of alternatives in which the City’s spending level is reduced to amounts ranging from $90.5 million to $12.5 million. These alternatives include reducing City support, benefit plan modifications and combinations of both, as shown in the chart below. It should be noted that should the City’s support level decrease, annuitant premiums would need to increase to cover the cost of healthcare. For example, at the current City support level of 55%, a single, Medicare-eligible annuitant’s contribution toward a $307 total monthly healthcare cost is $73. If the City’s support level were to be reduced to 16%, this annuitant’s monthly premium would increase to $193.[1] (Click to enlarge.) 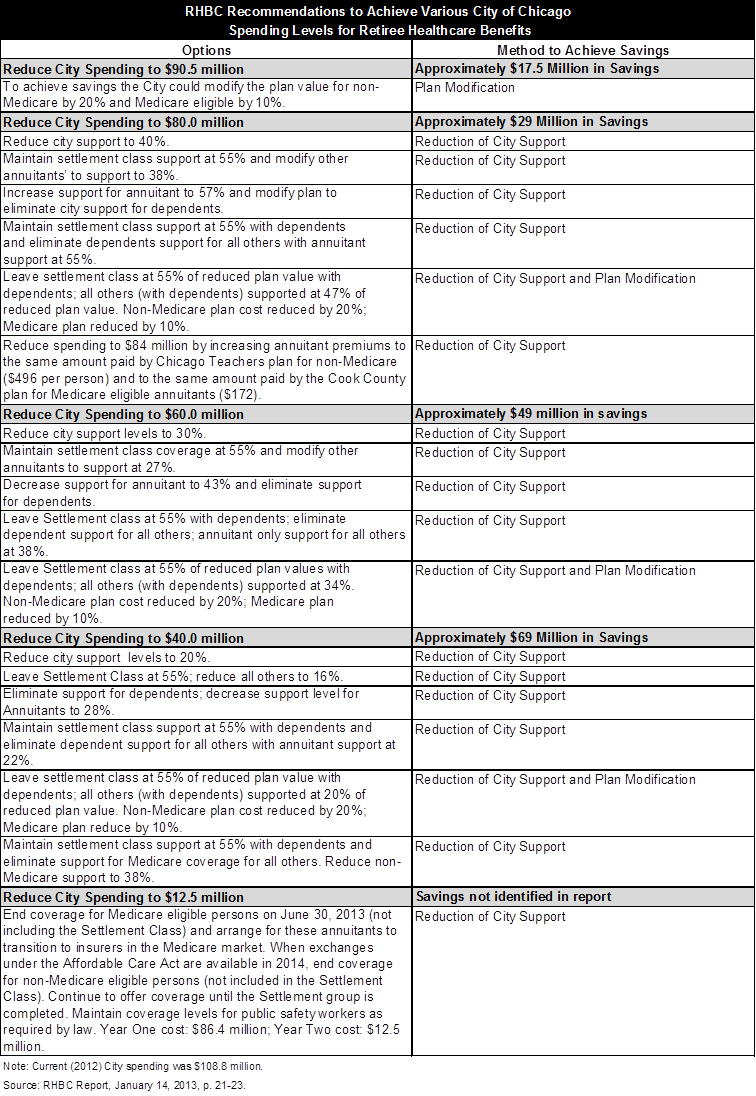 Regarding the report’s third option, elimination of City funding for retiree healthcare benefits, the Commission states that it may be beneficial for the City to extend healthcare coverage for non-Medicare eligible annuitants until the Affordable Care Act (ACA) exchanges are fully available in 2014. Beginning in 2014, under the ACA, non-Medicare eligible retirees would be able to access insurance through new regulated marketplaces, or exchanges. The ACA increases access for retirees not yet eligible for Medicare by outlawing practices that previously made finding healthcare coverage difficult.

The Civic Federation has historically urged the Mayor and City Council to consider a solution based on the Chicago Transit Authority (CTA) model for the City to divest itself of financial responsibility for retiree health insurance by creating an independent retiree healthcare trust fund. State legislation would be required to create such a trust.

The model adopted by the CTA provides an example of the costs and benefits of an independent retiree health care trust. Public Act 95-0708 created a separate Retiree Health Care Trust for the provision of CTA retiree health insurance. The CTA seeded the Trust with approximately $529 million in bond proceeds on which it is scheduled to pay debt service through the year 2040. However, neither the CTA nor the CTA pension fund has any further financial obligations regarding retiree health insurance beyond the debt service.[2] Public Act 95-708 requires employees to contribute 3% of pay to the CTA Retiree Health Care Trust and that amount increased to 6% in 2012.[3] Retiree, survivor and dependent contributions to their health care benefits cannot exceed 45% of the total benefit cost.[4] The fiscal health of the fund is monitored by the State Auditor General. If the actuarial present value of projected benefits expected to be paid to current and future retirees and their dependents and survivors is found to exceed the actuarial present value of projected contributions, trust income and reserves, the Trust’s Board of Trustees must submit to the Auditor General a plan to rectify the situation within ten years by increasing participant contributions, reducing benefits or making other plan changes.[5] As of January 1, 2011, the funded ratio of the CTA Retiree Health Care Trust was 106.4%.[6]