How Healthy are Chicago-area Public Pension Funds? A Look at Funded Ratios

As reported in the Civic Federation’s latest report on ten local government pension funds, the most recent audited financial statements of the Chicago firefighters’ pension fund showed a market value funded ratio of only 27.2%. The Chicago police fund was close behind at only 34.7%.

What do these numbers mean?

When a pension fund has enough assets to cover all its accrued liabilities, it is considered 100% funded. This does not mean that employer and employee contributions are no longer required, but rather that the plan is funded at the appropriate level on the date of valuation. A funding level under 100% means that a fund does not have sufficient assets on the date of valuation to cover its actuarial accrued liability.

Some people claim that there is no real need for governments to achieve 100% funding, although federal law requires that private sector pension plans meet a 100% funding target.[1] They argue that governments, unlike private corporations, are not at risk of dissolving and, therefore, can meet their obligations in perpetuity. However, if the unfunded liability is growing and the plan has no practical strategy for reducing it, this is cause for serious concern.

Most market value funded ratios for the ten Chicago-area public pension funds declined since fiscal year 1999, and dropped dramatically in fiscal year 2008. The one exception is the CTA fund, which received $1.1 billion in pension obligation bond proceeds in 2008. 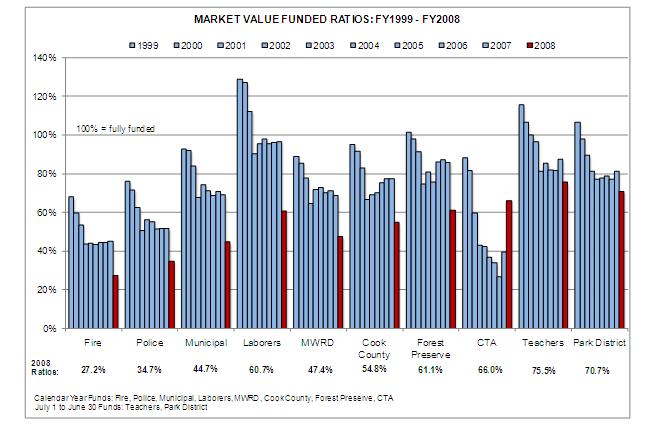 The smoothed actuarial funded ratios of all funds except the CTA (due to the infusion of $1.1 billion in bond proceeds) have also fallen since 1999, and every fund except the Laborers and Forest Preserve is less than 80% funded. 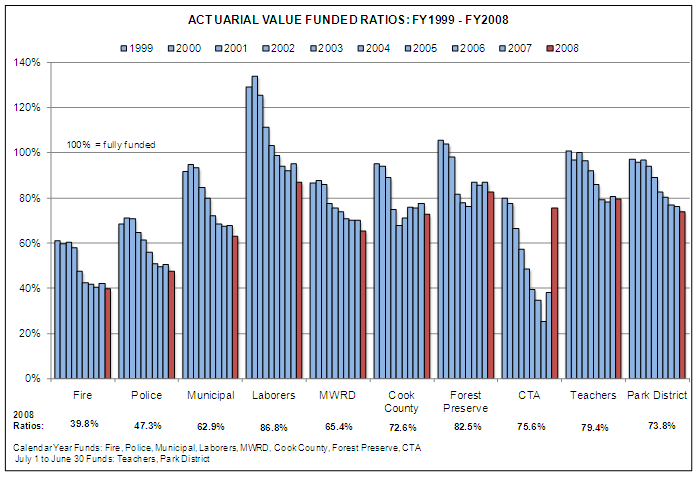