How the City of Chicago Uses Tax Increment Financing Surplus

The following blog post discusses how the City of Chicago has used surplus revenue in its tax increment financing (TIF) districts since 2013.

TIF is a powerful economic development tool for the City of Chicago, particularly at a time when capital and development funding from the State of Illinois and federal government has been scarce. One out of every four properties in the City is in a TIF district and in 2017 the City of Chicago collected over $660 million in TIF revenue, nearly one-third of total property tax revenue.

It is important to recognize here that the major impact of TIF in counties subject to the Property Tax Extension Limitation Law (PTELL or “tax caps”) like Cook County is to raise tax rates for all taxpayers higher than they would otherwise have been. TIF does not freeze or take away tax revenue from overlapping governments such as the Chicago Public Schools. This is because tax capped governments set their levies independent of taxable value, mostly basing annual property tax increases on inflation instead.[1]

Revenue generated in a TIF district is intended to be used for redevelopment costs within the district such as land acquisition, site development, public works improvements, and debt service on bonds to fund improvements within the district. By law, money in the tax increment financing district is pledged to be spent on bond obligations to directly to pay eligible TIF expenses. According to the City of Chicago, since the start of the TIF program in 1984, the City has provided:

According to the terms of the TIF Act, if there is excess money in the fund annually after funds have been pledged, it is considered to be surplus. Surplus funds must be calculated annually and distributed to overlying taxing districts. The funds must be distributed on a proportional basis; they cannot be directed to a single or select group of overlying taxing districts.

On November 8, 2013, Mayor Emanuel signed an executive order making it an official practice to annually identify and declare a TIF surplus in districts that meet certain criteria. Under Executive Order No. 2013-3, the City declares a surplus in TIF districts that are older than three years, were not created for a single redevelopment project, do not support debt service costs on Modern Schools Across Chicago (MSAC) bonds, and have a balance of at least $1 million. In addition to declaring an annual TIF surplus through the Executive Order, the Mayor froze new spending in downtown TIF districts in 2015 and terminated 17 TIF districts since 2011, actions that have generated additional surplus. Finally, the Mayor has also committed to capturing the increased property taxes generated in the TIF districts from the four-year increase in the levy to fund the Police and Fire Pension Funds as TIF surplus. The following chart shows the annual TIF surpluses declared in Chicago between FY2009 and projected for FY2019. 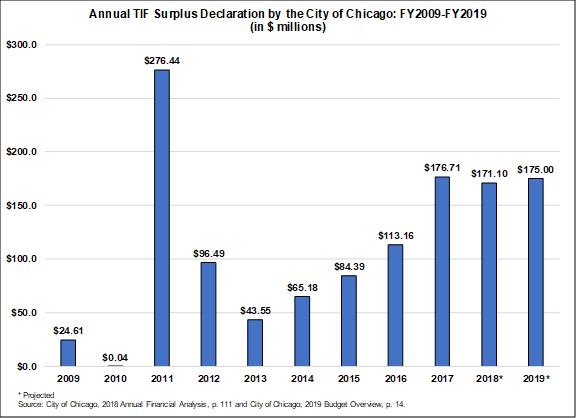 In FY2019 the City will declare a surplus in Tax Increment Financing (TIF) districts of $175 million and will receive $42 million as its share of the distribution of those funds. The City will use its share of funds in FY2019 to help address the City’s budget deficit. Approximately $97 million will be disbursed to the Chicago Public Schools (CPS) and the remainder to the other overlapping tax districts in FY2019. Since 2009 and including the proposed surplus for FY2019, the City will have declared a total of more than $1.2 billion in TIF surplus with approximately half going to Chicago Public Schools.

It is important to note that Mayor Emanuel’s Executive Order and principles for TIF surplus declaration have provided some rules and regularity to what had previously appeared to be an ad hoc process. Additionally, annual surplus funds have assisted other local governments in balancing their budgets.

However, repeatedly accumulating and declaring surplus in the TIF system also has a number of downsides. First, it can raise concerns that the TIF district does not need its revenue for redevelopment projects. Such a situation could indicate that either the district does not have achievable redevelopment goals and should be terminated or that it generates more revenue than is needed and some parcels should be released from the TIF district so that their EAV (taxable value) may be returned to the general tax base. Several other Cook County municipalities have successfully conducted such TIF “carve outs.”

Second, the purpose of TIF is not to temporarily reduce short-term financial operating pressures facing the City, Chicago Public Schools and other local governments. TIF districts do not have unlimited resources, and they are the major source of economic development funding for the City of Chicago. Spending that revenue elsewhere, regardless of “surplus” designation, necessarily reduces the City’s capacity to engage in economic development.

Finally, TIF surplus—whether or not it is declared annually and according to a policy—is not a sustainable, recurring revenue source for the City of Chicago or other governments for the reasons described above. Surplus distributions should not be used to close operating budgetary deficits, but instead should be directed to reserves or to nonrecurring expenses.

[1] The full impact of TIF on overlapping governments requires a number of different caveats. First, the Transit TIFs have a completely different relationship with CPS. Second, if an observer assumes that new construction within the TIF would have occurred even if the TIF did not exist, then it is possible that an overlapping government could have lost out on levying for that new property outside of the property tax cap. However, TIF dissolution brings both new construction and existing property growth back to the school district outside the tax cap, along with a boost in available tax revenue, some of which would not be available to the government without the TIF. See Civic Federation, Tax Increment Financing (TIF): A Civic Federation Issue Brief, November 12, 2007.