The Federation has blogged on this issue a number of times in recent years. You can read more on the dissolution of Evanston Township here and here.

The white paper produced by the City of Evanston on the dissolution of Evanston Township provides the following information:

The Township of Evanston was coterminous with the City of Evanston, meaning that it shared the same geographic boundaries as the City of Evanston. There are 19 other coterminous townships in the State of Illinois. Evanston was also unique in that the City Council and Township Board were both composed of the same individuals serving dual roles, but as separate taxing bodies. Evanston Township services were also very limited when compared to other townships in Illinois in that the Township did not maintain any roads or bridges. However, the Township did provide general assistance and advisory property assessment services to its residents.

In October 2011, the Evanston City Council voted 5-4 to submit a non-binding referendum question to their electorate asking whether Evanston Townships should be dissolved and its functions be transferred to the City of Evanston. The electorate overwhelmingly approved the non-binding referendum question during the March 20, 2012 election with 66.9% of the voters supporting the measure and 33.0% of the voters opposing the measure.

Following the approval of the non-binding referendum, local officials in Evanston worked with Illinois State Senator Daniel Biss and other representatives in the Illinois General Assembly to successfully change the Illinois Township Code allowing for Evanston Township to be dissolved and its functions be transferred to the City.

On October 8, 2013, the Evanston City Council adopted a resolution to place a binding referendum question on the March 18, 2014 election ballot. The binding referendum was again overwhelmingly approved with 63.7% of the electorate voting in favor of the dissolution of Evanston Township. The following April, City Council passed a resolution authorizing the dissolution of the Township.

Evanston Township operated under two distinct work units: the Township Supervisor’s Office and the Township Assessor’s Office. The chart below identifies the savings produced within each unit as a result of the dissolution.

The fiscal analysis found that the dissolution of the Township and the transferring of its functions has resulted in $574,787 in cost savings in the General Assistance Fund and $204,881 in the Town Fund. The white paper supports these cost savings by providing a budget analysis in the appendix, comparing FY2012 revenues and expenses with FY2015 budget data.

The majority of the savings in the General Assistance Fund are due to a reduction in salary/benefit expenses and administrative expenses. Similarly, the Town Fund also saw substantial savings related to the elimination of positions. The City of Evanston has directed $204,271 of the savings to enhance services offered to its residents by coordinating with local community partner organizations and improving service coordination with other units of local government.

Based on this analysis, the white paper estimates that over a 20 year period the savings will total approximately $19.4 million. 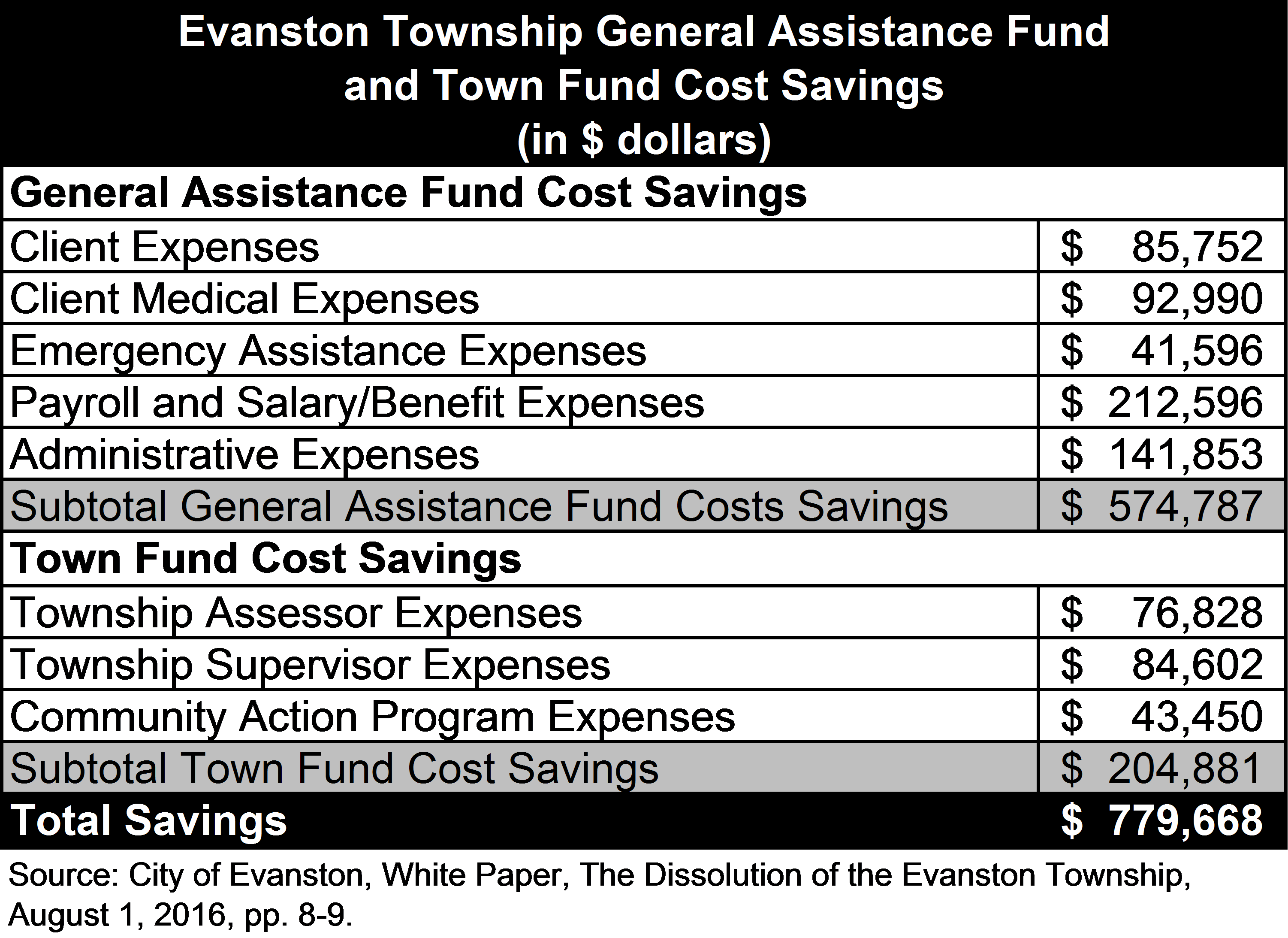 In summary, the initial results following the dissolution of Evanston Township indicate that the services previously provided by the Township to residents are being enhanced while at the same time substantial tax dollars are being saved, reducing the tax burden on residents.

The Federation will continue to monitor consolidation and dissolution efforts that reduce the number of local governments in Illinois, such as the City of Belleville, which will soon take over Belleville Township functions, which it projects will save taxpayers approximately $260,000 annually.[2]