Some of the key highlights of the current FY2023 budget and future fiscal plans include:

This section provides an overview of the CTA’s FY2023 budget as well as a seven-year review of CTA appropriations between the adopted FY2019 budget and the authority’s FY2025 fiscal plan. The seven-year timeline provides a snapshot of the CTA’s pre-pandemic, pandemic and projected post-pandemic appropriation trends. Data are presented for FY2019 through FY2021 actual expenses, the FY2022 forecast, the adopted FY2023 budget and planned budgets for FY2024 and FY2025. The Regional Transit Authority adopted FY2023 budgets for itself and its service boards as well as a five-year capital plan on December 15, 2022.

Labor is the largest category of expenses and will increase by 13.0%, or $148.1 million, from $1.1 billion in FY2022 to nearly $1.3 billion in FY2023. The CTA budget includes approved contractual wage and benefit increases as well as additional positions. The position increases primarily consist of additional janitorial, laborer, security, rail control and administrative positions.

The “Other Expenses” category is the second largest expenditure category. It includes utilities for CTA facilities, non-capital grant expenses, travel and meetings, advertising and promotions, contractual and maintenance services, leases and rentals, debt service payments, other general expenses and pension obligation bond debt. Total other expenses are projected to increase by 13.5%, or $33.7 million, between the FY2022 budget forecast and the FY2023 adopted budget. The largest item in other expenses is contractual services, which will be budgeted at $152.2 million in FY2023, a $34.8 million increase from FY2022. Pension obligation bond debt service is the second largest expense item in this category, totaling $101.3 million in FY2023.

Over the two-year period between FY2022 and FY2023 the CTA budget for provisions for insurance and claims will decrease by $11.5 million or 36.3%. The amount budgeted is determined by the CTA’s actuaries based on claims history and future projections.

Between FY2022 and FY2023, expenses for fuel and power will rise substantially. Fuel appropriations will increase by 71.8%, or $21.6 million, while power expenses will increase by $47.7%, or $10.5 million. The fuel increase is due to rising diesel prices brought about by constrained supply in global markets and high global demand. The power increase is primarily due to electric rate hikes from Commonwealth Edison in 2023.

Appropriations for material will increase by $8.2 million, or 7.7%, over the two-year period, rising from $106.5 million in FY2022 to $114.7 million in FY2023. The increase is driven primarily by increasing costs for goods and parts needed for infrastructure and the CTA’s transportation fleet as well as continuing COVID-19 related expenses for personal protective equipment and cleaning supplies.

The CTA regularly purchases security services via intergovernmental agreements with the Evanston, Forest Park, Oak Park and Chicago police departments in addition to contracts with private security firms. The Chicago Police Department’s Public Transportation Unit also provides regular patrol services at no expense. Security costs will rise significantly in FY2023, from $23.2 million to $41.2 million. The change is driven primarily by the addition of new private security firms and an increase in the number of Chicago police officers patrolling the transit system.

The next exhibit shows the distribution of FY2023 CTA operating expenses by category. Approximately 70.3% of all expenses are earmarked for labor. The second largest amount, 8.3% or $152.2 million, will be spent on contractual services. Pension Obligation debt service will consume $101.2 million or 5.5% of all expenses.

The CTA has two main operating revenue sources: system-generated revenues and public funding that passes through the Regional Transportation Authority (RTA). System-generated revenue includes fares and other revenue generated by CTA sources. Public funding includes revenue from the sales tax, public transportation funds and real estate transfer tax distributed by the RTA to its three service boards – the CTA, Metra and Pace. In addition, the CTA has received hundreds of millions of dollars in federal relief funding since FY2020.

The President’s FY2023 Budget Recommendations include $1.8 billion in operating resources, which is a 14.3%, or $228.5 million, increase from the previous year’s forecast of $1.6 billion.

CTA’s public funding is provided through the Regional Transportation Authority (RTA) and comes from three primary sources: 1) RTA sales tax revenues collected in the City of Chicago and suburban Cook County; 2) discretionary, non-statutory, RTA funds generated by local sales taxes and a State General Fund sales tax match; and 3) a portion of the Chicago Real Estate Transfer tax. These resources are expected to increase slightly from $1.02 billion to $1.04 billion or $17.8 million.

Total system-generated revenue is FY2023 is expected to be $393.6 million, a 4.9% or $18.5 million increase from the current fiscal year. Passenger revenue from fares and passes will rise slightly by $20.2 million. The reduced fare subsidy received from the State of Illinois will remain constant at $14.6 million.

The third major source of CTA funding will be provided by federal relief funds from the Coronavirus Aid Relief and Economic Security (CARES) Act, the Coronavirus Response and Relief Supplemental Appropriations (CRRSA) Act and the American Rescue Plan (ARP) Act. These funds, which have been essential to balancing CTA budgets since FY2020, will be nearly exhausted by 2025. These funds will provide $389.9 million in FY2023, a $192.2 million, or a 97.2% increase from the previous year.

The CTA has only been able to balance its budget since FY2020 with the assistance of federal relief funding. This funding has been critical in compensating for declines in passenger revenues due to the CTA’s significant ridership losses during the COVID 19 pandemic. This will continue to be the case until FY2025. Federal funds as a percentage of total CTA funding have ranged from 31.5% in FY2020 to 12.4% in FY2022. Federal funds will be nearly exhausted after 2025, posing major challenges for the fiscal future of the CTA. 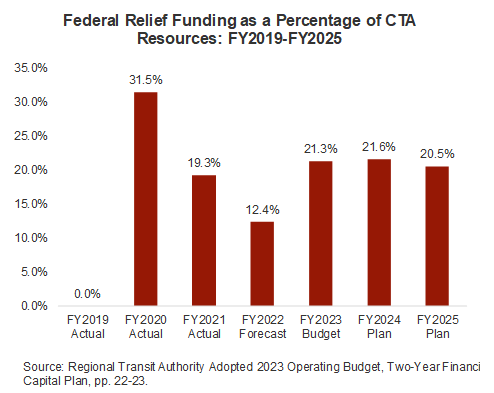 CTA ridership had been declining between 2012 and 2019 before the onset of the COVID-19 pandemic. However, it plunged dramatically between 2019 and 2021, from 455.7 to 196.0 million rides as the city and the nation experienced lockdowns and business closures. Ridership is projected to increase to 303.9 million by 2025. But this is only 66.7% of what it was in 2019, posing a significant challenge to the CTA’s ability to fund its operations or provide current levels of service going forward. 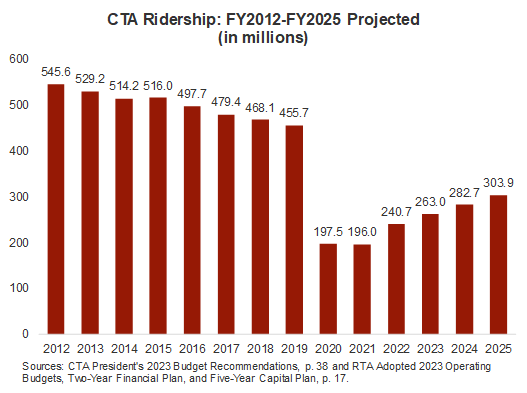 Consumer Taxes in Chicago: Increases and Updates for 2023

The Civic Federation annually releases a report on consumer taxes in the City of Chicago, which will be released next month. Consumer taxes are tied to the use or consumption of certain goods and services that can be charged directly to consumers through retail transactions or passed on to...