Cook County as a unit of government has not increased its base property tax of $720.5 million since 2001. This means that the levy dollar amount has not been adjusted to account for inflation. To keep the levy at the same amount, adjustments are made to the property tax rate in order to offset increases or decreases to the assessed valuations in Cook County. However, the County’s total tax levy has increased by 8.4% over the past ten years. This is because the County has been able to capture additional tax revenue from expiring tax increment financing (TIF) districts, new property construction and expiring incentives.

Governments are able to capture revenue from expiring tax increment financing (TIF) districts through a provision of the Property Tax Extension Limitation Law (PTELL or “tax caps”), as explained in this blog post. The Property Tax Extension Limitation Law (PTELL) limits the size of a government’s increase in its annual property tax extension to 5% or the increase in the Consumer Price Index (CPI), whichever is less, with some exceptions. Cook County, as a home rule unit of government, is not subject to PTELL but does have its own self-imposed property tax limitation that is modeled on PTELL. Treasurer Pappas’ study points out that there are 82 home rule taxing districts in Cook County, meaning they are not bound by Illinois’ statutory limits to how much they can increase their property tax levies, and 476 non-home rule taxing districts that are capped by PTELL.

When a TIF district is created, the equalized assessed value (EAV) of property within the TIF area boundary is “frozen.” Taxing bodies like the City, County and school districts then can only apply their property tax rates to the frozen EAV and any property tax revenue from taxing the incremental growth in property value goes to fund the TIF district. After 23 years a TIF district expires or it can be dissolved once its redevelopment project is completed. The Illinois General Assembly can also pass a law extending a TIF district for longer than 23 years. The year after a TIF district expires or is dissolved, any government that overlaps the TIF district is allowed to apply its tax rate to the incremental value in order to generate additional revenue for the government instead of the value simply going into the tax base. This is not an increase to taxpayers because the revenue previously paid to the TIF district is now directed to the overlapping government instead. Cook County has taken advantage of this mechanism since FY2013.

Cook County’s FY2021 budget requests a total property tax levy of $784.2 million, which is an increase of 2.2% over $775.4 million the prior year. The total levy includes $63.7 million in property tax revenue due to the following:

The chart below shows the total property tax extension in Cook County over the ten-year period from 2010 through 2019, based on data available from the Cook County Clerk’s annual tax rate reports. The property tax extension is the final amount of property tax revenue that a unit of local government is authorized to receive and that is billed to taxpayers after the application of various laws to the government’s original levy request. The total extension for all taxing districts in the County increased from $11.7 billion in 2010 to $15.6 billion in 2019, representing an increase of 33.5%. This is the combined increase of all taxing bodies in Cook County which includes Cook County, the City of Chicago, Chicago Public Schools, special purpose taxing districts like the Metropolitan Water Reclamation District and park districts, and all of the municipalities, townships and school districts in the Cook County suburbs. 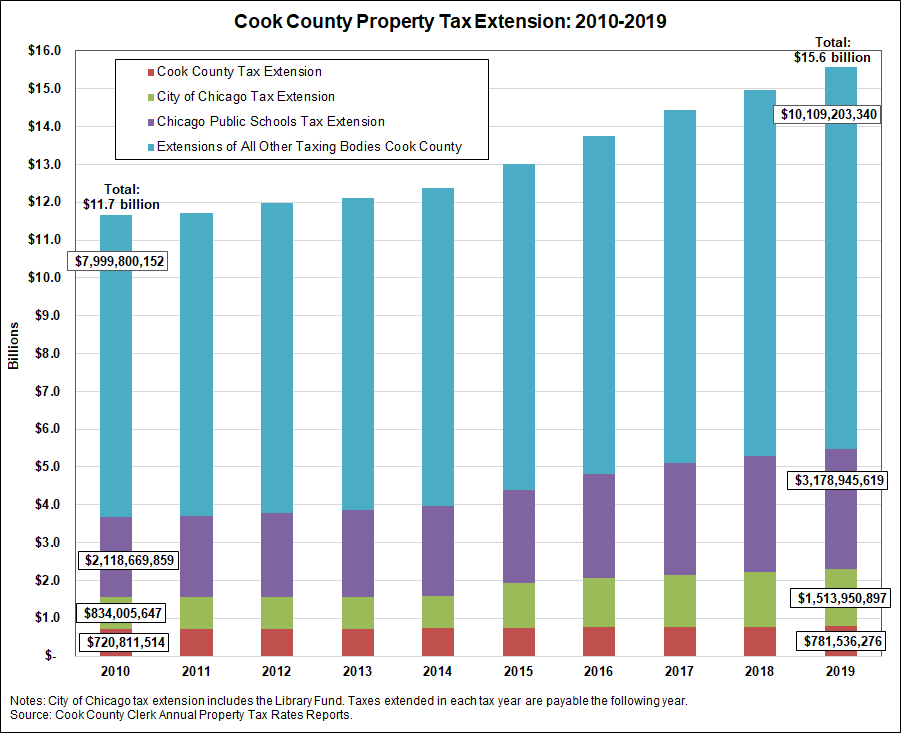