In its 2010 Cook County Modernization Report, the Civic Federation recommended that performance measures be incorporated into the budgeting and management process. In January 2011 Cook County Board President Toni Preckwinkle introduced the Performance Based Management and Budgeting Ordinance, which mandates that each County department and agency, including the offices of other County elected officials, prepare quarterly reports identifying goals and performance benchmarks. In July 2011 the County published the first of the quarterly STAR reports. The reports describe the purpose, functions and goals of each department and progress made toward meeting those established goals. While the STAR reports review goals related to departmental operations and activities, this blog focuses on financial goals. The reports also provide policymakers with data that they can use to make evidence-based decisions on budgets and programs. To date, six STAR reports have been published with the most recent report summarizing the County’s departmental performance for the 4th Quarter of 2012.

The STAR reports group individual departments into six categories: Finance and Administration, Economic Development, Healthcare, Property and Taxation, Public Safety and Forest Preserve District (this post does not include information about the Forest Preserve District). Overall for the departments contributing to the 2012 4th Quarter STAR report, actual FY2012 spending was under budget by $76.4 million, or 4.1%.

Departments categorized under Finance and Administration[1] experienced the largest percentage savings as spending came in 14.1%, or approximately $13.0 million, below budgeted expenditures. Significant savings in the Geographic Information Systems (GIS) department contributed to the category’s overall savings. GIS reported expenses $7.4 million, or 48.8%, under budget for FY2012. While the department experienced 67% more data requests from County agencies, it received 57% fewer service requests than anticipated for FY2012. The Highway Department also produced savings last year, using only $47,000, or 20.2%, of its targeted $233,000 overtime budget. Conversely, departments categorized under Economic Development spent more than budgeted by 1.3%, or $60,000, in FY2012. The department of Planning and Development is grouped under this category and, as discussed below, exceeded its budget by 49.5% in FY2012.

Healthcare, which includes the Cook County Health and Hospitals System, saw the largest dollar amount savings, coming in below budget by $56.9 million, or 7.1%. Property and Taxation and Public Safety also spent less than their targeted amounts in FY2012 by $4.4 million and $2.2 million, respectively. (Click to enlarge.) 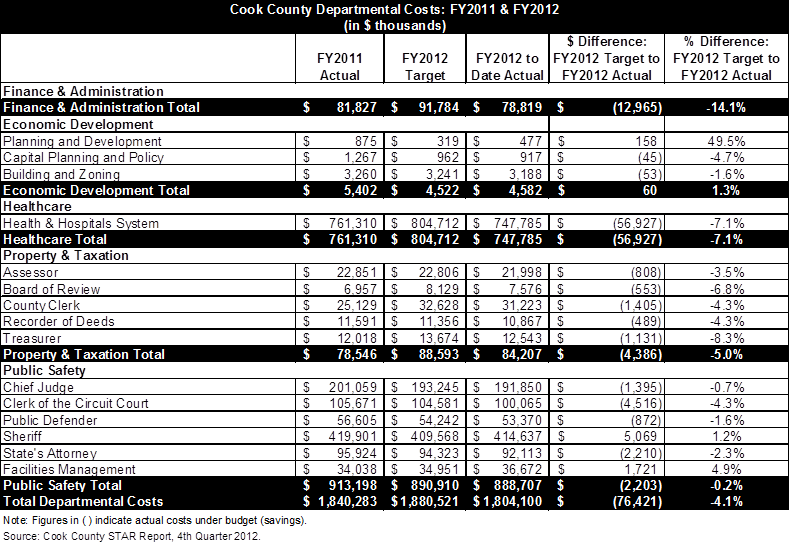 As shown below, eight departments exceeded their budgets in FY2012. Planning and Development exceeded its budget by the greatest percentage; the department was over budget by 49.5%, or $158,000. This is attributable to an appropriation adjustment which reduced the department’s budget by $707,000. It is not clear from the STAR report why or when the adjustment occurred. Actual spending for the Cook County Sheriff was over budget by approximately $5.1 million, the greatest dollar amount of the departments reviewed in this blog, due to overtime spending beyond targeted amounts.[2] (Click to enlarge.)

To improve the STAR reports, the Civic Federation offers two recommendations. First, the reports should include aggregated data that shows how the County overall is performing financially in terms of actual spending to budget targets. Second, significant variation between actual spending and budget targets throughout the report should include narratives explaining the causes.