During the June 29, 2016 Finance Committee meeting the measure was taken for a vote. After much debate, the resolution received a sufficient number of votes to be presented to full County Board. Certain County Board members who voted against the resolution argued that the issue was being rushed and the referendum question did not provide voters with enough information to make an informed decision. County Board members in favor of the resolution argued that Cook County is an outlier among other major counties throughout the United States that have combined offices for the Clerk and Recorder of Deeds. Board members in favor of the resolution also argued that the merging of the two offices will streamline county operations and reduce the financial burden placed on taxpayers. On the same day, the County Board then voted to approve the referendum. The County Commissioners who voted in favor of and against the referendum question being placed on the November 2016 ballot are as follows: 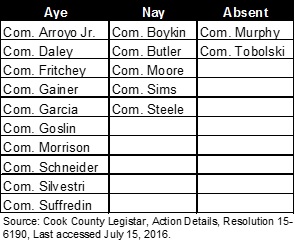 The countywide referendum question the electorate will vote on during the November 8, 2016 election will be presented on the ballot in the following form:

The Civic Federation first recommended this streamlining move in the Cook County Modernization Report published in October 2010 as a way to eliminate costly duplicative services and reduce citizen confusion about where to find the services they need.

The County Clerk and Recorder of Deeds keep and maintain various public records. The County Clerk is the official custodian of Cook County records and books.[1] The Clerk’s duties include administering elections, processing lobbyist registrations, maintaining vital records including birth and marriage certificates, providing real estate and tax services and preparing official documents for the Board of Commissioners.[2] The Recorder of Deeds Office records and stores public records for land transactions, federal and State tax liens, articles of incorporation, and Uniform Commercial Code filings.[3] In FY2016 General Fund appropriations fund 136.0 full-time equivalent (FTE) positions for the Clerk’s office and 99.0 FTEs for the Recorder’s office.[4] The FY2016 General Fund appropriations are $8.2 million for the County Clerk and $5.2 million for the Recorder of Deeds.[5] This totals an amount equal to approximately $13.4 million in General Fund expenditures for both offices in FY2016.

The similarity of administrative functions in these offices provides an opportunity for consolidation and potential cost savings. The resolution indicates that the County could save over $1 million annually by merging the offices and consolidating functions. In the Cook County Modernization Report, the Civic Federation estimated cost savings of approximately $0.8 million, based on FY2010 General Fund expenditures of $16.3 million and an assumption of 5% reduction in costs. Former Cook County Commissioner Mike Quigley estimated the County could save approximately $616,000 in his 2003 report Reinventing Cook County. Using the same assumption that there will be a 5% reduction in costs by merging the two offices, the Federation estimates the County could generate approximately $674,000 in cost savings, based on FY2016 General Fund expenditures of $13.4 million for both offices.

Other counties in Illinois – those with fewer than 60,000 inhabitants – have a combined clerk-recorder office, according to State law. In addition, many large metropolitan counties across the nation with populations more similar to Cook County have merged their clerk and recorder functions into one position. Some of these include Los Angeles, Orange and San Diego counties in California. Los Angeles County combined its Departments of Registrar of Voters and Recorder in 1968 and further merged the department with the County Clerk in 1991. Before the merger, the three operations and 700 employees worked in separate facilities. According to LA County, in 1993 the department fulfilled its long-term goal of merging all functions to one site, “providing a permanent and secure headquarters for all operations, as well as its extensive volume of 160 million documents.”[6]