Today the Civic Federation released its analysis of Cook County’s FY2011 Executive Budget Recommendation. The Federation supports Cook County’s $3.0 billion proposed budget plan as it reflects a significant effort by the new County administration to usher in an era of significant reform of governmental operations. The Federation commends Board President Preckwinkle and her team for their commitment to adopt a plan to fully roll back the sales tax increase by 2013 as part of the FY2011 budget process.

The County’s progress so far follows many of the recommendations made by the Civic Federation in the Cook County Modernization report.

The Civic Federation believes that the County still faces significant fiscal challenges including major budget deficits. Although the recommended FY2011 budget includes large agency reductions, the County will likely continue to have budgetary shortfalls in coming years due to significant cost drivers, repeal of the remaining portion of the sales tax and because it must address its declining pension funds. Its $487 million FY2011 budget deficit is a cause for concern: 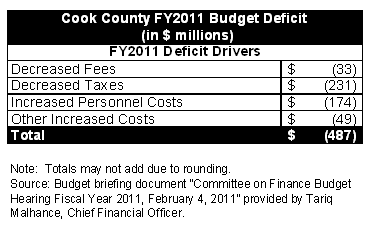 Reducing the budget gap will be an especially challenging job for the County. The largest contributors to the budget deficit are decreased tax revenue (primarily due to the sales tax roll back) and increasing personnel costs. As mentioned above, the County plans to bridge the budget gap with a recipe relying primarily on broad agency cuts to most County departments: 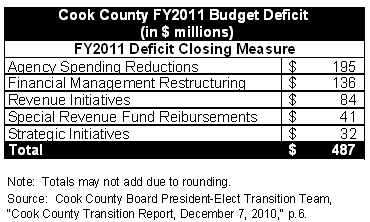 Those agency reductions typically range between 14% and 18%. However, the total general funds budget is only decreasing by 2.3%. This is due to significant increases in fixed charges. The County accounts for expenses that are not allocated to individual departments such as health insurance, pension, workers compensation and utilities as fixed charges. Some other governments allocate such expenses to individual departments to better reflect the costs of individual services. The County’s FY2011 budget for fixed costs includes a significant settlement related to the jails, but it would still have a large increase without that cost. The Civic Federation is concerned that large increases in cost drivers such as fixed charges mean the County will likely face continuing budget shortfalls in coming years.

The City of Chicago recently released its Budget Forecast for FY2021 , which provides financial estimates for the City’s current fiscal year that ends on December 31, 2020 and a...

Chicago Public Schools Budget Progress in Jeopardy due to COVID-19

In a recent analysis of the Chicago Public Schools FY2021 budget, the Civic Federation supported the District’s proposed $8.4 billion budget. However, the Federation expressed serious concerns about the budget’s reliance on $343 million in...