The Civic Federation joined with the Federal Reserve Bank of Chicago on April 4, 2013 to co-host a conference on economic development strategies during difficult fiscal times. Experts and practitioners from California, Michigan and the Chicago area led discussions of the opportunities and challenges states and local governments face in making decisions on how best to grow their economies while still balancing budgets. Attendees to the sold out conference included civic and business leaders, government officials and economic development specialists.

The forum began with orienting remarks by Bill Testa of the Federal Reserve Bank and Professor Therese McGuire of Northwestern University. Both explored research into whether tax rates or political and policy uncertainty have the greater impact on economic growth. In discussing the literature, Dr. Testa and Prof. McGuire came to different conclusions about how Illinois’ high levels of debt and probable future tax increases may influence the State’s economic future.

Dr. Testa told attendees that Illinois’ tax rates have historically been relatively below the average of all states and not out of line with its neighboring states. Illinois has been different, however, in its level of borrowing. Thus, it appears that Illinois has been compensating for its low taxes by issuing debt. Dr. Testa cited economics research which has generally found that state and local tax burdens do not have an overwhelming impact on growth, except at the local level. Dr. Testa noted that Illinois, due to its large budget gaps, high level of debt and unfunded pension obligations, faces a large future increase in taxes that could therefore negatively impact Illinois’ many border communities. Dr. Testa concluded that policymakers should be concerned that high future levels of taxation may have a significant negative impact on economic growth. They should keep these issues in mind when devising economic development programs. 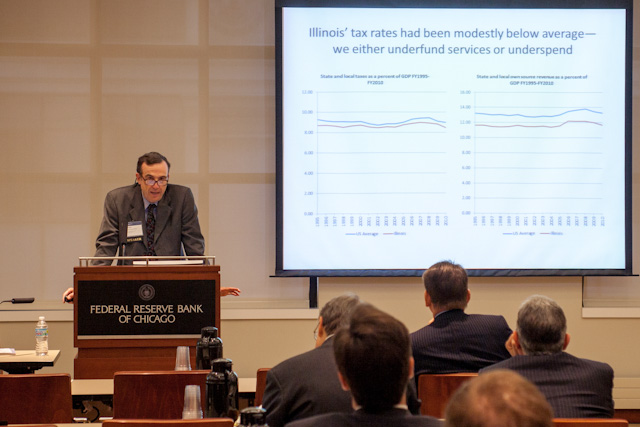 Professor McGuire outlined the conclusions of several state tax commissions and numerous academic studies of the link between levels of taxation and economic growth. She said most found either inconclusive evidence or no link. Additionally, Prof. McGuire’s 2006 study of the Colorado Taxpayers Bill of Rights (TABOR) taxation limitation legislation found that the legislation did not significantly boost Colorado’s economy. She concluded that the link between level of state taxation and state economic growth is too weak for her to believe that cutting taxes is an effective economic growth policy. However, she did present the results of a 2013 study that showed a link between uncertainty about future levels of taxation at the federal level and decreases in employment and GDP for the country as a whole. Prof. McGuire’s recommendation on the most effective economic development strategy that Illinois could pursue is to make a clear plan to pay off its debt, not assume new debt other than for capital purposes and to reform its tax structure such that the most critical functions of government most important to a strong economy are supported. 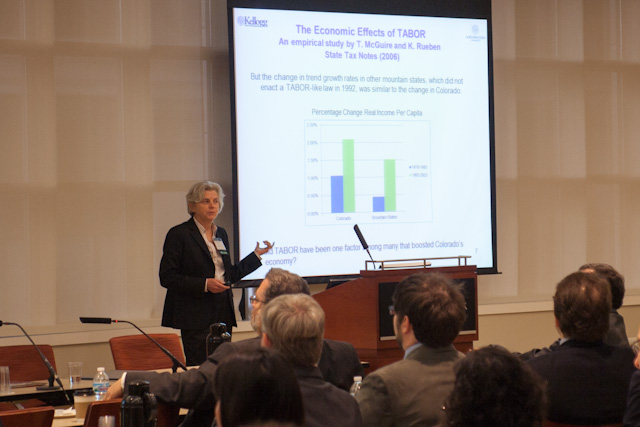 The first panel discussed how policies in two states with ongoing fiscal challenges, Michigan and California, have helped and hindered economic development efforts. The panelists shared perspectives from the state and local levels. Alicia Berg, Vice President of Campus Environment at Columbia College Chicago and former Commissioner of the Chicago Department of Planning and Development, moderated the discussion.

Mitch Bean, founding Principal of Great Lakes Economic Consulting and former Director of the Michigan House Fiscal Agency, spoke about Michigan’s 10-year recession, how it was impacted by fiscal policy decisions made at the state level and how the state’s actions to close a structural deficit have affected local governments. Mr. Bean contended that the state’s response to huge decreases in GDP and employment was flawed and exacerbated the problem. The state decided to cut its business tax as an economic development play, shifted funding to the state from local governments and made large cuts in spending. Mr. Bean said that the first decision made the state’s structural deficit larger and the second simply shifted budget problems from the state to local governments, making their economic development work more difficult. He concluded that instead of improving Michigan’s economy, the state’s actions made a difficult problem worse. 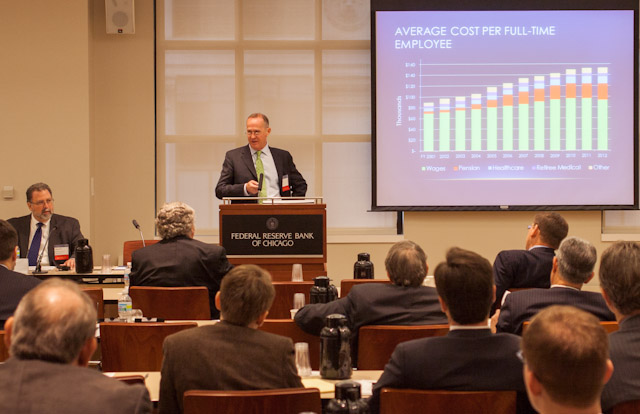 Tom Tait, Mayor of Anaheim, California, introduced attendees to his city by giving them a background on the city’s economic and demographic history. When the Mayor took office in 2010, despite Anaheim’s strengths as an entertainment destination, the city faced some significant fiscal difficulties. These included growing unemployment, a budget deficit and growing public pension payments. While the Mayor was able to take steps to close the deficit, including using budgetary reserves and cutting staff, the City’s economic development plans were derailed by the State of California’s decision to end redevelopment agencies. The Mayor said that the state’s increase in the income tax, which does not benefit local governments, had the side effect of intensifying efforts by other states to poach businesses from Anaheim. With little funding available for economic development programs, the Mayor decided to initiate a program to make Anaheim attractive to business in other ways, such as by cutting regulation through his Regulatory Relief Task Force. He noted that while the program is still very new, there is some anecdotal evidence that Anaheim’s efforts to become more business friendly have been met with success. Thousands of new business licenses have been issued this year and business leaders have chosen Anaheim over other California cities with more onerous regulations.

Ms. Berg then led a dialogue with attendees centering on whether states and local governments can afford to opt out of the economic incentive “game,” in which governments across the nation give up billions in revenues in order to retain or lure companies to their areas. Mayor Tait and Mr. Bean agreed that economic incentive programs need to be better evaluated and justified. Mayor Tait added that in order for an incentive to be productive, there must be a measurable economic impact. 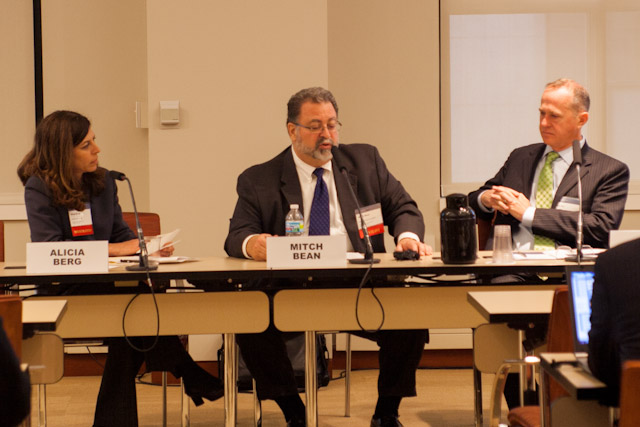 Discussion with Session I panelists: Fiscal Distress and Economic Development.

Stephen B. Friedman, President of S.B. Friedman Development Advisors, started the panel off with a review of the characteristics of a 21st century economy versus the traditional Chicago area economy. He said both types of economy are needed to support the state’s population, so it is important for the state and local governments to pursue the differing strategies that work for each. The state must repair the business climate by reforming the tax system and improving infrastructure and the educational system. Local governments must focus on quality of life issues and be sure that they are making the appropriate decisions for their communities based on a thorough evaluation of public benefits and costs. It is especially important to determine whether public financing is absolutely necessary for a project. Mr. Friedman then discussed some of the tools of the economic development trade, such as tax increment financing, and how best to evaluate their effectiveness for a particular project. 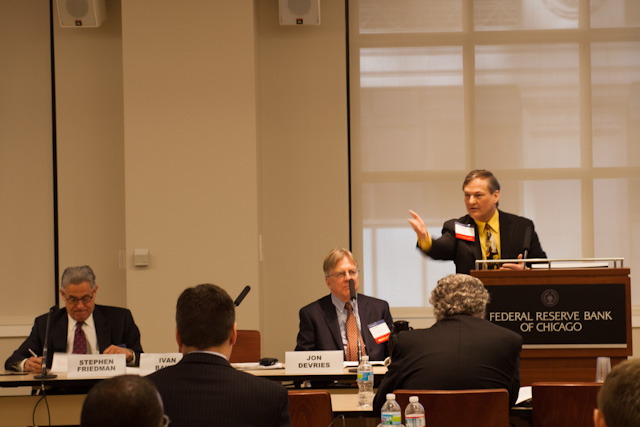 A successful case of economic development through good times and bad in the Chicago area is the southwestern suburb of Tinley Park. Ivan Baker, the village’s Director of Economic Development, described strategies Tinley Park has pursued that have made it a national model. First and foremost, Mr. Baker noted that Tinley Park focuses every day on being a good all-around place to live. It does that by continually preparing for good and bad economic times, ensuring that the village is well maintained with a focus on quality development, that the tax base is diversified and by emphasizing increasing the value of businesses and residences.

Jon DeVries, Director of the Marshall Bennett Institute of Real Estate at Roosevelt University, gave the group an overview of the history of planning in Chicago, concluding that it is time for the city to develop a comprehensive plan for its future. Chicago has experienced huge demographic and economic shifts over the past decade, but since planning is defunded and fragmented, the city has not created a plan to cope with that change and set the stage for future development. Mr. DeVries then noted some of the difficulties that may impede Chicago’s ability to plan, such as a high level of debt. However, he emphasized that planning is crucial to the city’s economic growth because it is important to businesses and residents, those we have and those that we wish to attract.

Professor Weber led a question and answer session with attendees that touched on topics ranging from how to fund a comprehensive development plan to how to foster development that creates “good” jobs versus “bad” jobs to whether Chicago’s bid for the 2016 Olympics was a development positive or negative. 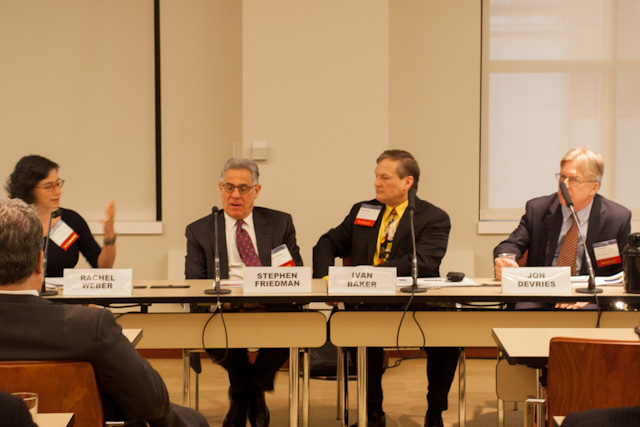 City of Chicago Deputy Mayor Steve Koch drew together the theoretical and practical messages of the conference in his keynote speech about the economic development work Mayor Rahm Emanuel has accomplished during his time in office. Mr. Koch said that the Mayor has emphasized a growing economy as one of the major goals for his administration, starting with fixing the city’s own finances. He said that the Mayor’s focus has paid off as Chicago’s economy is now on the right trajectory, drawing 75 companies in the past year and their 25,000 associated jobs. He added that the city only invests in incentives when absolutely necessary because talent, infrastructure and external perception matter far more than incentives to attract businesses.

While unemployment remains high in Chicago, Mr. Koch said the Mayor is making investments in areas that will ensure job growth in years to come. These areas include the new career focus at City Colleges of Chicago, investments in the city’s infrastructure and a renewed emphasis on tourism. The economic development issues the city continues to work on include improving the TIF program, reducing the city’s long-term debt and pension obligations and better coordinating economic development initiatives between the city, Cook County and the State of Illinois. In closing, Mr. Koch related some anecdotes highlighting the Mayor’s extraordinary commitment to bringing jobs to Chicago, including calling the CEOs of prospective companies directly. Mr. Koch answered questions from the attendees about the Infrastructure Trust and the city’s TIF strategy. 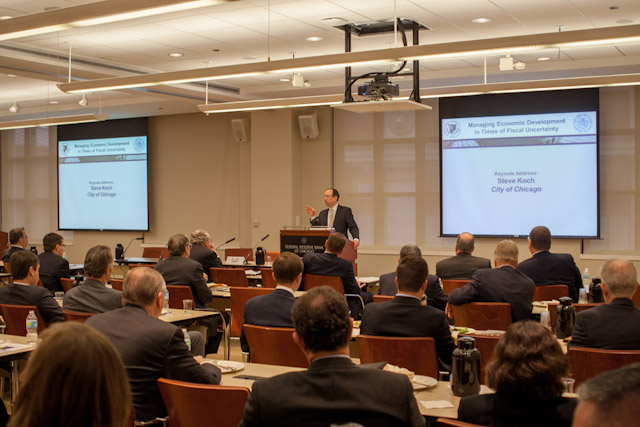