A Comparison of Community College Tuition Rates in Northeastern Illinois

The following table shows the City Colleges tuition changes that have occurred over the past ten years. Between 2007 and 2012 the in-district tuition per credit hour increased gradually by $17, or 23.6%. Tuition remained flat at $89 per credit hour for in-district residents from 2012-2015, followed by the tuition structure change in FY2016. The proposed tuition structure in FY2017 will remain flat from the prior year. 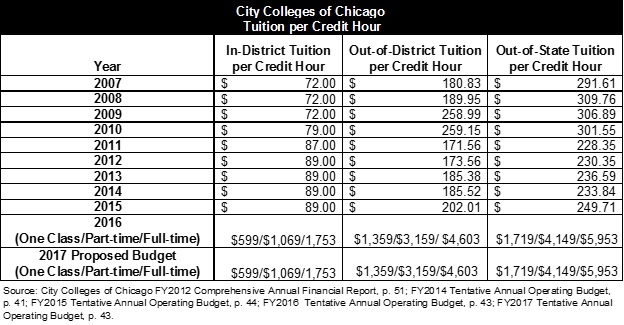 Under the current tuition structure, a student enrolled in one class totaling three credit hours at City Colleges with only mandatory fees, will pay $599, which is a tuition increase of $252, or 72.6%, over the FY2015 budgeted tuition and fees, which makes City Colleges the most expensive community college in the region for a three credit hour class.

The City Colleges $1,069 in-district part-time rate is the least expensive among the eleven selected community colleges if a student enrolls in 9-11 credit hours, but it is the highest if a student enrolls in 5-7 credit hours. At 8 credit hours, City Colleges is the fifth least expensive of the 11 community colleges. A part-time in-district student taking two classes that total six credit hours with only mandatory fees is now paying $455 more, or a 74.1% increase over FY2015 tuition and fee rates. 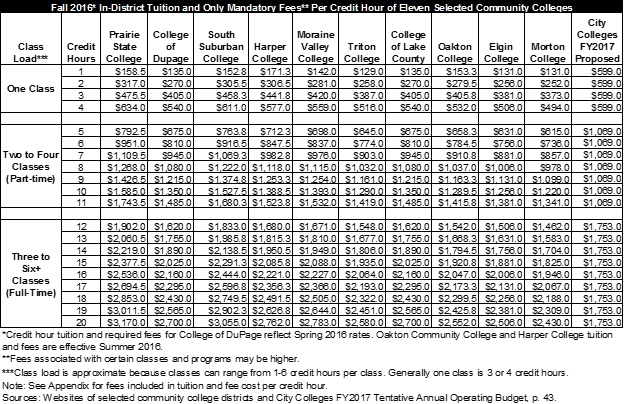 [3] For more information about included mandatory fees, see the Appendix on p. 48 of the Civic Federation’s Analysis of City Colleges of Chicago FY2017 Tentative Budget, https://www.civicfed.org/sites/default/files/REPORT_CityCollegesFY2017Budget.pdf .