Highlights of the data compiled on the ten pension funds are summarized below. 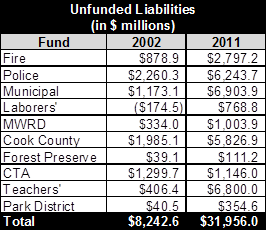 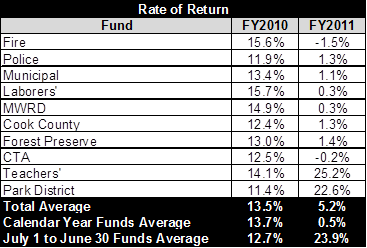 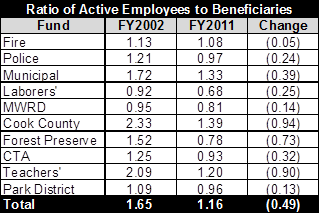 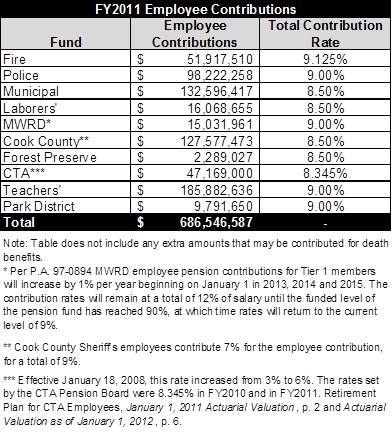 Employer Contributions and ARC: All funds received their statutorily required employer contributions in FY2011. However, none of the employers contributed the full actuarially calculated annual required employer contribution (ARC) in FY2011 and only one fund, the MWRD Retirement Fund, contributed more than 50% of the pension ARC. ARC is the sum of (1) the employer’s normal cost of retirement benefits earned by employees in the current year and (2) the amount needed to amortize any existing unfunded accrued liability over a period of not more than 30 years. ARC is a concept created and defined by the Governmental Accounting Standards Board. [4] In the aggregate, in order to meet the pension ARC in FY2011, employers should have contributed approximately $2.5 billion. Instead they contributed less than half that amount, $832.1 million, falling short by $1.6 billion. Employers contributed an aggregate equivalent of 10.9% of payroll to the pension funds for pension obligations. In order to meet the ARC, they should have contributed an additional 21.4% for a total of 32.3% of payroll in FY2011. 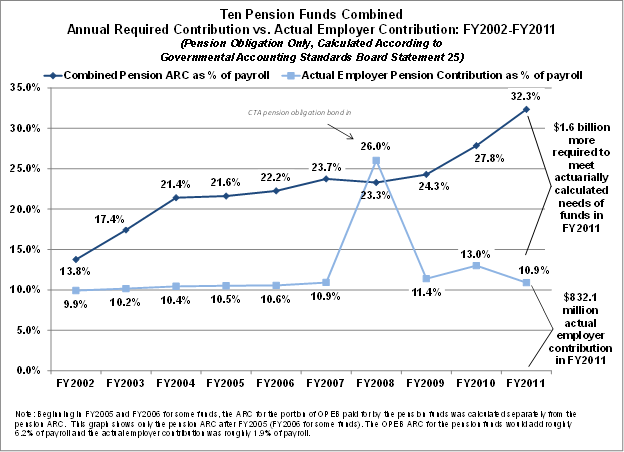 The deteriorating health of the ten pension funds featured in this report necessitates immediate action from local governments and the State to reform the current pension system. The Civic Federation recommends that local governments work together with the Illinois General Assembly to enact pension changes to significantly reduce pension costs, including reducing automatic annual benefit increases and raising the retirement age for current employees. Local governments must also pursue increased contributions from workers and changes to how governments fund their share of benefits, linking them to an actuarially sound methodology based on funding levels.

Local governments should develop their own frameworks for reform based on their funds’ individual characteristics, such as funding levels, population and statutory provisions. In 2012 the Metropolitan Water Reclamation District successfully developed and promoted a framework for pension reform which led to the enactment of Public Act 97-0894. The District’s reforms increase employee and employer contributions to the District’s pension fund in an effort to increase the Fund’s funded ratio. Recent efforts by Cook County Board President Toni Preckwinkle and Board Commissioner Bridget Gainer also provide an example of transparently advocating for reform. Commissioner Gainer’s OpenPensions.org website features reams of pension data and alternative scenarios and strategies for addressing the County’s pension problems with a focus on the ultimate goal of making its pension fund sustainable.

For more detailed information on the status of local pensions, read the full report here.

[2] The Civic Federation calculates investment rate of return using the following formula for all funds: Current Year Rate of Return = Current Year Gross Investment Income/ (0.5*(Previous Year Market Value of Assets + Current Year Market Value of Assets – Current Year Gross Investment Income)). This is not necessarily the formula used by all funds’ actuaries and investment managers, thus investment rates of return reported here may differ from those reported in a fund’s actuarial statements. However, it is a standard actuarial formula. Gross investment income includes income from securities lending activities, net of borrower rebates. It does not subtract out related investment and securities lending fees, which are treated as expenses.

[3] Of the ten funds covered in this analysis, only the participants in the CTA pension fund also participate in the federal Social Security program. CTA retirees are eligible for Social Security benefits in addition to their CTA pension benefits. The CTA and its employees each pay an additional 6.2% of the employee’s Social Security taxable salary to the Social Security administration. The majority of all government employers and employees hired after March 31, 1986 each pay Medicare payroll taxes of 1.45%. See Internal Revenue Service Publication 963 for further information.

[4] ARC is an accounting reporting requirement but not a funding requirement. However, it does represent a reasonable calculation of the amount of money the employer might contribute each year in order to cover costs attributable to the current year and to reduce unfunded liabilities.