This week the Civic Federation released its annual Status of Local Pension Funding report. This report reviews fiscal year 2010 actuarial valuation reports and financial statements of the retirement funds.[1] The purpose of this report is to compile and analyze basic financial data on ten major local government employee pension funds in the Chicago area.[2] It is intended to provide policymakers, pension trustees, pension fund members and taxpayers with information they need to make informed decisions regarding public employee retirement benefits. It explains common indicators of pension fund fiscal health and causes for change in the health of the local funds.

The following pension funds are included in the analysis.

Highlights of the data compiled on the ten pension funds are summarized below. 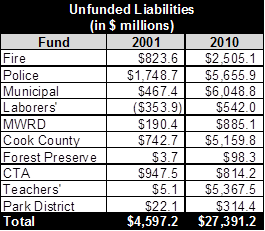 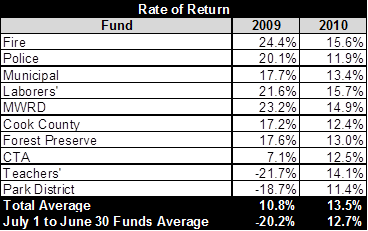 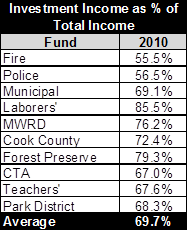 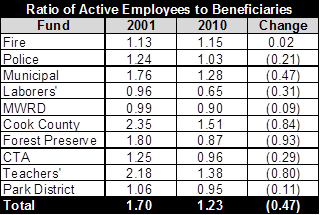 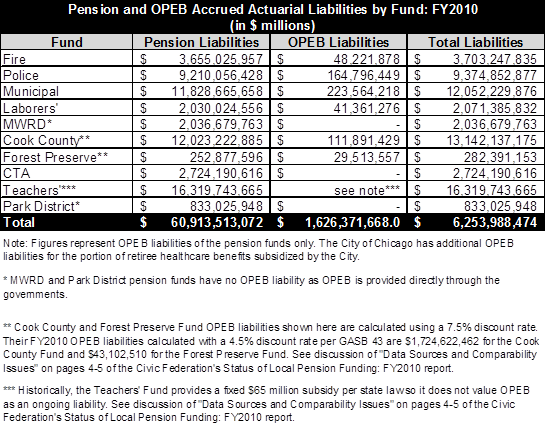 Employee Contributions: For all ten funds, employee contributions totaled $697.2 million in FY2010. Most employees contribute at rates ranging from 8.5% to 9.125% of salary.[13] 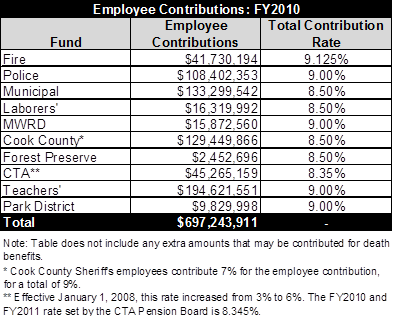 Employer Contributions and ARC: All funds received their statutorily required employer contributions in FY2010. However, none of the employers contributed the full actuarially calculated annual required employer contribution (ARC) in FY2010 and only two funds, the Teachers’ Fund and the CTA Fund, contributed more than 50% of the pension ARC.[14] In the aggregate, in order to meet the pension ARC in FY2010, employers should have contributed $2.1 billion. Instead they contributed less than half that amount, $959.1 million, falling short by approximately $1.2 billion. Employers contributed an aggregate equivalent of 12.6% of payroll to the pension funds for pension obligations, but in order to meet the ARC, they should have contributed an additional 15.2% for a total of 27.8% of payroll in FY2010. 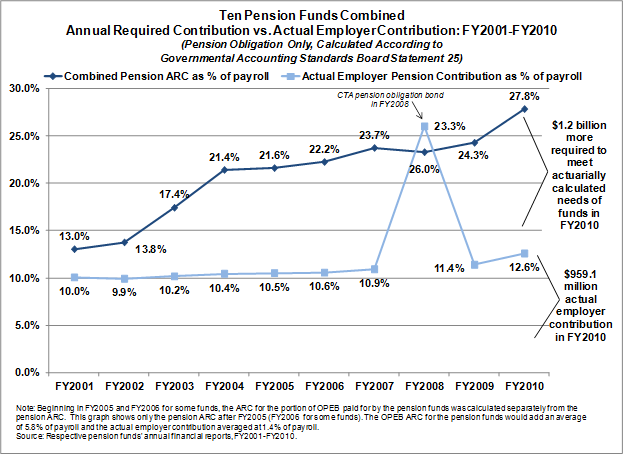 For more detailed information on the status of local pensions, read the full report here.

[1] Fiscal year 2010 data is the most recent audited data available for all ten pension funds.

[2] In this report the terms “pension fund” and “pension plan” are used interchangeably. The term “local government” is used here broadly and includes the Chicago Transit Authority, an Illinois municipal corporation. The seven governments and ten funds analyzed in this report were created by Acts of the Illinois General Assembly.

[3] The City of Chicago enrolls its employees in four different pension systems.

[4] The funds of Cook County and the Cook County Forest Preserve District are governed by the same pension board.

[6]The fiscal year of the Park Employees’ and the Public School Teachers’ pension funds is July 1-June 30. The other eight funds use a January 1 – December 31 fiscal year. On May 31, 2012, the Illinois General Assembly passed Senate Bill 3629, which, if signed into law, would amend the Park District Fund’s fiscal year to be concurrent with the calendar year and the sponsoring government’s fiscal year, beginning January 1, 2013.

[7] Funded ratio is the ratio of assets to liabilities. Usually this ratio is expressed in terms of actuarial values, as required by GASB 25. When a pension fund has enough assets to cover all its accrued liabilities, it is considered 100% funded.

[9] Market value of assets can be reported by their market value, which recognizes unrealized gains and losses immediately in the current year and can produce significant fluctuation year-to-year. This measure is subject to volatility in the market.

[13] In FY2009, CTA employees paid 6.0% of salary, but this increased to 8.345% in FY2010. CTA is the only government reviewed in this report whose employees also participate in Social Security.

[14] ARC is an accounting reporting requirement, not a funding requirement. However, it does represent a reasonable calculation of the amount of money the employer might contribute each year in order to cover costs attributable to the current year and to reduce unfunded liabilities.