On December 12, 2012, an ordinance to create an independent budget office was introduced to City Council. The ordinance, sponsored by Aldermen Ameya Pawar (47th Ward), Michelle Smith (43rd Ward) and Pat Dowell (3rd Ward), was assigned to the Committee on Committees, Rules and Ethics to be considered. Although more detail about the proposal is needed, the Civic Federation supports the initiative that would allow aldermen to seek independent, professional expertise before considering major legislation including the annual budget. The Federation made a similar recommendation to create a policy analysis office in its 2011 roadmap, Recommendations for a Financially Sustainable City of Chicago.

The Structure of Chicago’s City Council

Chicago has one of the largest councils in the United States. The FY2013 appropriation for City Council expenses was over $25.9 million.[1] As the exhibit below shows, Chicago’s Council is the second largest among those of the 15 largest American cities, with its size exceeded only by New York’s 51-member legislative body. It has the third lowest per capita ratio: only Jacksonville and Indianapolis have smaller council per capita ratios. In Chicago there is one alderman per roughly 54,000 residents as compared to one council member per 161,000 New Yorkers and one council member per 253,000 Los Angeles residents. (Click to enlarge.) 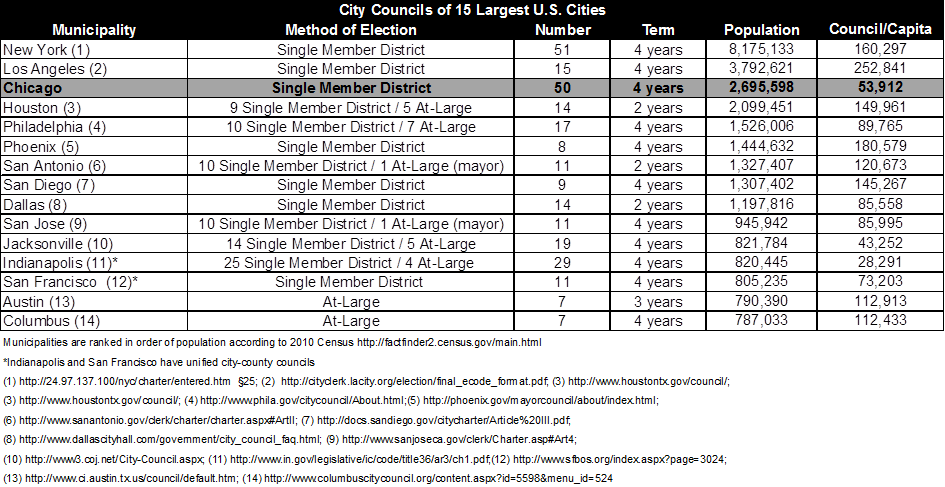 A large council tends to focus more on constituent services and localized interests than on functioning as a legislative body that emphasizes policymaking and oversight.[2] Smaller councils are more focused on traditional legislative functions. In Chicago, aldermen spend relatively little time legislating on public policy issues. Between December 2010 and May 2011, only 4% or 219 of the 5,024 ordinances and orders introduced into the Council involved broad public policy matters. The remaining 96% focused on administrative issues such as permit renewals or sign removals. In addition, Mayor Daley rather than aldermen introduced 125 or 57% of the 219 policy issues.[3]

The proposed legislation amends Chapter 2-8 of the Municipal Code to create a legislative office that would provide City Council with independent financial analysis on the annual budget, as well as analyses of proposed legislation involving public-private partnerships, including those under the Chicago Infrastructure Trust, asset leases and sales, managed competition or privatization proposals, municipal marketing proposals and TIF projects. The director of the proposed Office for Independent Budget Analysis (OIBA) would be appointed by the majority vote of the Council. The office would be subject to the supervision of the Council’s Committee on Budget and Government Operations.

It is important that a Council that is the co-equal of the executive branch have full access to the information and analysis that it needs to make informed decisions and legislate effectively. Currently the Mayor, as head of the executive branch, has a vast array of informational and financial resources at his disposal and the Council is heavily dependent on the Mayor and the Mayor’s staff for information. For example, when the Council had concerns about the potential cost and liability of the City’s proposed 2016 Summer Olympic Games bid, it asked the Civic Federation to conduct a review of the financial projections because the Council lacks the ability to conduct such research.[4] With the establishment of the Chicago Infrastructure Trust, which gave the City the authority to open infrastructure investment opportunities from new private sector sources, the need for independent financial analyses for City Council has increased. Although the Trust will act as an administrative body managing projects and contracts, each project will be independently engaged and financed through a grant agreement approved by the City Council (or related government units). As such, it is necessary that Council members are able to solicit independent analyses for each proposal to adequately evaluate the immediate and long-term financial impact on the City and its taxpayers.

The City Council also lacks the ability to independently evaluate the City’s budgetary and long-term fiscal condition. The City’s budget is of a size and complexity that such an office is warranted. It is common for legislative bodies at all levels of government to have independent research offices. The Congressional Budget Office and Government Accountability Office serve that role at the federal level. At the state level, the Illinois General Assembly has the Commission on Government Forecasting and Accountability while the California Legislature has the Legislative Analyst’s Office. The following are some examples of such offices at the municipal level:

• New York: The Independent Budget Office (IBO) is a publicly funded agency that provides nonpartisan information about New York City’s budget to the City Council and the public;

In its 2011 roadmap, the Civic Federation recommended that the independent office be funded from savings accrued by reducing the size of the Council, particularly since most of the populous cities in the nation operate successfully with smaller councils.[5] The proposed ordinance does not indicate how OIBA will be funded, though compensation for the director and his appointed assistants would be provided in the annual appropriation ordinance.

[1] City of Chicago, FY2013 Appropriation Ordinance, p. 13.
[2] For a full discussion, see The Chicago Home Rule Commission. Chicago’s Government: Its Structural Modernization and Home Rule Problems – A Report to Mayor Martin Kennelly and the Chicago City Council, “Chapter III: Size and Composition of the Chicago Council: Size,” 1954, p. 35.
[3] Mick Dumke. “The real key to City Council reform: Let legislators legislate,” Chicago Reader, May 19, 2011, pp. 11-12.
[4] Chicago City Council Resolution Requesting that the Civic Federation Review Expenditure and Revenue Projections and Prepare a Report and Recommendations Regarding the Financial Aspects of Chicago's Olympic Bid, June 30, 2009.
[5] The City Council’s size has been reduced in the past. The Bureau of Public Efficiency, a nonpartisan government research organization that merged with the Civic Federation in 1932, proposed that the Chicago City Council be reduced from 70 to 50 members in 1919. Legislation permitting the change was approved by the General Assembly and submitted to the public for a referendum. The referendum failed, but was resubmitted and finally approved in 1923.