City Colleges prepares a capital budget at the same time as the operating budget. This is usually part of a comprehensive five-year capital improvement (CIP) plan. The last CIP was published in FY2018 and was to conclude in FY2023.[1]  This year, however, faced with uncertainty over current and long-term funding due to the COVID-19 pandemic, City Colleges will implement a one-year stopgap capital plan. The plan will focus on essential life safety repair and maintenance projects. Technology expenditures in the capital budget will include updating hardware and software licensing agreements. Long-term capital plans are being postponed until the fiscal situation stabilizes.[2]

The City Colleges’ Capital Fund provides pay-as-you-go funding for a substantial portion of its major building projects, as well as the improvement of existing structures. In FY2021 the total capital budget is proposed to be approximately $29.0 million. This amount is a $13.7 million or 32.0% reduction from the FY2020 capital budget request of $42.6 million. Approximately 65% of the proposed FY2021 budget or $18.9 million, will be funded from City Colleges current receipts. The remainder, $10.0 million, will be bond funded. No State of Illinois funds are anticipated in this budget.[3]

The single largest amount of capital funds, or $12.4 million, which is 42.9% of all funds, will be spent on conveying systems, which are elevators and escalators. This includes funding for several Malcolm X College elevators which failed City of Chicago Department of Building inspections in January 2020.[4] The next largest amount, or $12.2 million, will be used to pay for information technology projects. Smaller amounts are earmarked for mechanical systems, campus security, electrical systems and architectural and structural projects. Unlike previous years, no funds will be earmarked for equipment or academic enhancement projects. 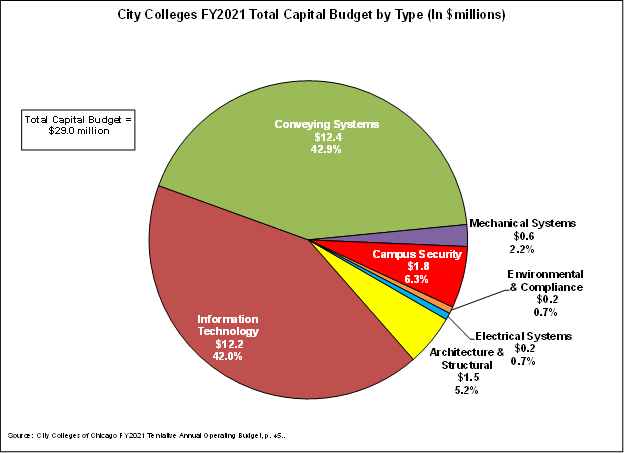 The District’s total long-term liabilities decreased by $16.3 million, or 3.5%, between FY2018 and FY2019. FY2019 is the most recent year for which audited financial data are available.  There were two principal drivers of this decrease:

Beginning in FY2007, through an intergovernmental agreement, City Colleges transferred its outstanding capital debt from general obligation bonds issued in FY1999 and FY2007 to the City of Chicago. At the time, 100% of the outstanding debt was in the form of capital leases, which required a $32.7 million payment in FY2007. The FY1999 issuance totaled $389.0 million and the FY2007 series totaled $39.1 million. In accordance with the transfer, the City of Chicago now levies the property taxes needed to pay the annual debt service for those bonds on behalf of City Colleges of Chicago.

The District completed its first bond issuance since the transfer of its general obligations to the City of Chicago of $250.0 million in October 2013 to fund its long-term capital plan. On December 11, 2017 City Colleges issued $78.0 million in Unlimited Tax General Obligation Bonds (Series 2017) for capital purposes. The bonds were issued with interest rates ranging from 4% to 5% with payment dates of June 1 and December 1 of each year.[10] Bond premiums and discounts are deferred and amortized over the life of the bonds using the effective interest method.

[4] The elevators in question were new; there is pending litigation regarding the failure of the elevators to function properly and pass inspection. Information provided by City Colleges of Chicago, June 23, 2020. See also City of Chicago Building Permit and Inspection Records at https://webapps1.chicago.gov/buildingrecords/inspectiondetails?addr=302386&insp=13062048.

[7] Governmental Accounting Standards Board, Summary of Statement No. 75: Accounting and Financial Reporting for Postemployment Benefits Other than Pensions at: https://www.gasb.org/cs/ContentServer?cid=1176166370763&d=&pagename=GASB%2FPronouncement_C%2FGASBSummaryPage.