As the State of Illinois approaches two full years without enacting a comprehensive state budget, local governments have been forced to make difficult financial decisions to continue operating during these uncertain times.

City Colleges of Chicago has received only a quarter of its funding from the Illinois Community College Board during the last two fiscal years, along with reduced MAP Grant funding for low income students. As a result, it has resorted to making cuts and efficiencies as well as drawing down reserve funds to continue operations. Because of the ongoing budget impasse and City Colleges’ use of its reserves, S&P Global Ratings downgraded City Colleges’ credit rating four notches to BBB from A+ on April 20, 2017, with the likelihood of a rating change in the near future if the District does not develop a plan to address its state funding shortfalls and liquidity crisis.

Fund balance is a term commonly used to describe the net assets of a governmental fund and serves as a measure of financial resources. As a public college system with primarily business-type activities, City Colleges of Chicago does not have governmental funds. Rather, it reports net assets for all of its funds. Thus, unrestricted net assets are akin to “fund balance” for the District.

The fund balance ratio reflects the savings that a government has accumulated relative to its expenditures for the fiscal year. It is an indicator of the government’s financial ability to maintain current service levels. Data used to calculate City Colleges’ ratio is found in the Statement of Net Assets from the City Colleges audited financial report.

The Government Finance Officers Association (GFOA) recommends that general purpose governments maintain an unrestricted general fund fund balance of no less than two months, or 16.7%, of regular general fund operating revenues or regular general fund operating expenditures. City Colleges is a special purpose, not a general purpose government, but its size and the relative instability of its revenue stream make it prudent for the District to maintain adequate reserves. The GFOA statement also recommends that each unit of government should adopt a formal policy that considers the unit’s own specific circumstances.

City Colleges maintains a policy that fund balance over 3% of the unrestricted funds actual expenses may be transferred to the Operations and Maintenance Fund subject to the Board’s approval. This effectively maintains a 3% minimum unrestricted funds fund balance.[1] The District included additional guidelines in its FY2017 budget that the District uses to manage its fund balances, including not using operating fund fund balance to finance current operations, except under extraordinary circumstances, and recognizing bond ratings, credit implications and the District’s limited revenue sources as important factors to be considered before using fund balance.[2] 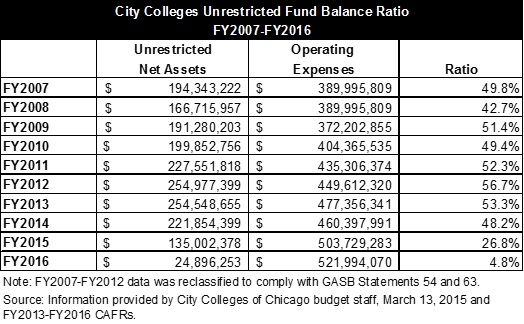 With the Illinois General Assembly currently in a special session working on a compromise to adopt a comprehensive state budget and City Colleges of Chicago nearing the end of its fiscal year on June 30, 2017, the Federation will continue to monitor the outcome of the state budget impasse to see if it will have a positive impact on the District’s finances.

[4] Information provided by City Colleges of Chicago Finance Department, May 30, 2017.