A City of Chicago Income Tax?

The following blog post examines the possibility of the City of Chicago instituting a city income tax. The idea was discussed by several mayoral and aldermanic candidates in the recent Chicago 2019 municipal election.

This blog post is intended for informational purposes only. The Civic Federation has not taken a position on a city income tax and does not support tax increases in the abstract. Furthermore, the Federation believes that any new taxes or increases to existing taxes would need to be tied to a long-term financial plan that balances the City’s budget and stabilizes its finances over the long-term.

The income tax base can be narrow or broad. The narrowest base for local income taxes includes earned and proprietary income only, as is the case in Pennsylvania. The broadest tax base includes personal, proprietary and corporate income, as in New York City.[1]

The Illinois Constitution provides that home rule units of governments such as the City of Chicago may only impose a local income tax if that authority is granted by the General Assembly, and it has not done so to date.

The City of Chicago Inspector General’s Office estimated in 2011 that a 1% municipal income tax could raise approximately $500 million. This figure was calculated by assuming that a 1% city income tax would be imposed on Chicago’s share of the adjusted gross income used by the state to calculate state income taxes in in 2009.

The governments imposing local income taxes were primarily municipalities and counties. Nearly 60% of these jurisdictions are in Pennsylvania. 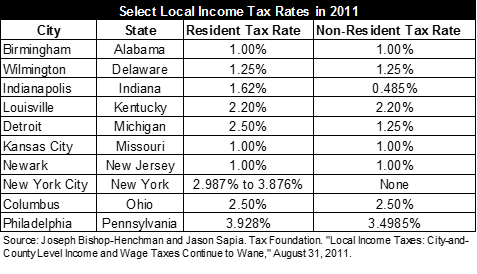 Pros and Cons of a Local Income Tax

The arguments against local income taxes include:

There are several arguments in favor of a local option income tax:

Implementing a Chicago municipal income tax would require the passage of legislation by the Illinois General Assembly or alternatively a constitutional amendment authorizing local option income taxes. It is reasonable to assume that the municipal tax would piggyback on the structure of the State income tax, whether that remains a flat rate tax or if it is changed to a graduated rate. The following issues would need to be addressed: