The City of Chicago expects year-end general operating revenues to be 20.6% below budget by the end of the current 2020 fiscal year, according to the City’s FY2021 budget proposal. As described in a previous blog post, the City released a mid-year budget forecast at the end of August for the City’s Corporate Fund, which is the general operating fund. The budget forecast anticipated actual revenue in FY2020 to be $3.5 billion compared to the originally budgeted amount of $4.4 billion. This blog post looks at the details of expected declines in Corporate Fund revenue sources in the current fiscal year (FY2020) and the upcoming fiscal year (FY2021). The City’s fiscal year runs from January 1 to December 31.

The COVID-19 pandemic caused significant declines in several economically sensitive revenue sources that support the Corporate Fund. The Corporate Fund does not receive funding support from property taxes. Corporate Fund operations are mainly supported by other local taxes and fees and charges. The table below shows the Corporate Fund resources budgeted for FY2020 compared to FY2020 year-end projections and the FY2021 proposed budget.

At year-end in FY2020, total resources in the Corporate Fund are projected to be $908.8 million, or 20.6%, under budget. Almost every revenue category is projected to decline between the FY2020 adopted budget and the FY2020 year-end estimates. The only revenue sources expected to increase are the cigarette tax and cannabis tax.

Non-tax revenue is projected to be $236.1 million, or 16.0%, lower at year-end than originally budgeted in FY2020. The largest projected decline is within fines and forfeitures, which are expected to be $112.7 million, or 32.9%, under budget.

City-collected sales tax revenue is projected to decline by $26.1 million, or 35.3%, to $47.9 million from the FY2020 budgeted level of $74.0 million. However, the majority of sales tax revenue is budgeted within the proceeds and transfers in category. The City’s state-collected sales tax revenue was sold to the Sales Tax Securitization Corporation (STSC) in 2017, as part of a mechanism to issue bonds for the City at a lower interest rate. Sales Tax revenues received by the STSC are paid first to cover the STSC’s operating expenses and debt service on the STSC’s bonds and then the remainder is transferred back to the Corporate Fund and are budgeted as proceeds and transfers in. Proceeds and transfers in are projected to be $488.4 million at FY2020 year-end, which is $154.1 million, or 24.0%, below budget.

The City’s FY2021 budget proposal shows that Corporate Fund FY2021 resources are expected to be lower than FY2020 budgeted levels due to the lingering economic impact of COVID-19, although FY2021 declines are not expected to be as severe as declines seen in the FY2020 year-end projections. Total Corporate Fund resources are estimated to be $396.8 million, or 9.0%, lower than the FY2020 budget, but 14.6% higher than FY2020 year-end. The largest tax revenue declines are expected to occur within the same taxes as the FY2020 year-end declines—parking tax, ground transportation tax, amusement tax and hotel tax. Despite a 1.75 percentage point proposed increase in the personal property lease transaction tax on cloud software and infrastructure (bringing the total tax to 9.0%), personal property lease transaction tax revenue in FY2021 is expected to be almost flat to the FY2020 budget. Cannabis taxes are expected to increase from $1.6 million budgeted for FY2020 to $5.2 million proposed in the FY2021 budget. The City was able to begin collecting taxes on cannabis sales on July 1, 2020. The cannabis tax revenue projection reflects a full year of collections. 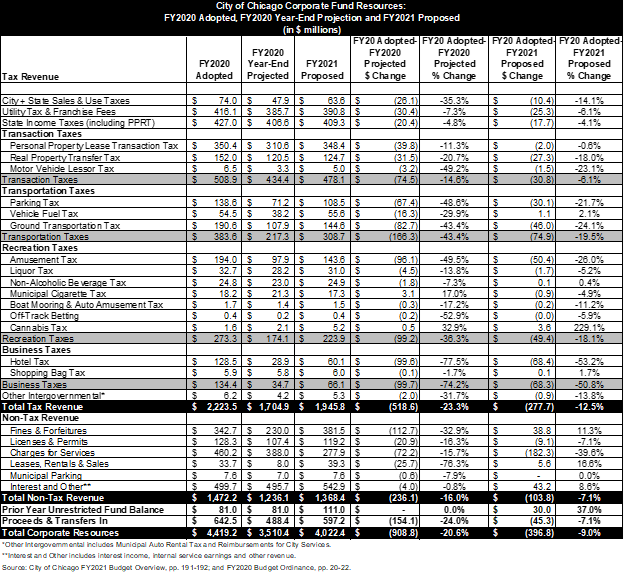 The Civic Federation will be releasing a full analysis of the City of Chicago’s proposed FY2021 budget in the coming weeks.