On December 4 the City of Chicago closed on a deal to refund $673 million of its General Obligation bonds with bonds issued by the Sales Tax Securitization Corporation (STSC). The City Created the STSC in October 2017 after such corporations were authorized by the Illinois General Assembly as part of the FY2018 Illinois budget. The legislation allows home rule units of government to create nonprofit corporations and assign them state-collected revenues, which can then issue debt. Although municipal bankruptcy is not currently allowed under Illinois law, special revenues assigned under this type of structure are intended to be more bankruptcy-remote, and therefore garner higher bond ratings and lower the cost of borrowing.

So far Chicago is one of the first Illinois municipalities to create such an entity, assigning all of its state-collected sales tax revenue to the STSC, which uses the funds to pay debt service and distributes the remainder to the City. The City’s reason for doing so is to be able to borrow at lower cost. The City’s General Obligation credit is rated A by Kroll, BBB+ by S&P, BBB- by Fitch, and Ba1 (non-investment grade) by Moody’s. The STSC is rated significantly higher: AAA by both Fitch and Kroll and AA- by S&P.

The STSC issued its first debt nearly a year ago after the City Council authorized up to $3 billion in borrowing. In the first two deals, in December 2017 and January 2018, the STSC issued $1.4 billion in principal and refunded all $563.4 million of the City’s outstanding sales tax-backed bonds and $929.5 million of General Obligation bonds. The new debt was issued at a substantially lower interest cost than the City’s General Obligation bonds and achieved $88 million in net present value savings, according to City officials.

The most recent deal was initially proposed as a $665 million transaction, but in late October the City decided to increase it to $1.3 billion, which would have used up most of the remaining authorization granted by the City Council. However, on October 26 S&P downgraded the Sales Tax Securitization Corporation from AA to AA-. The downgrade was a result of new criteria used by S&P to asses “priority lien” credits, such as the STSC, and limits its rating based on the City’s underlying General Obligation rating. In addition to the downgrade, the Civic Federation and others drew attention to the proposed structure of the new deal, which would have significantly lengthened the maturities of the City’s total debt profile.

The City delayed the issuance by two weeks and downsized the deal to $612.4 million and moved the final maturity from 2053 to 2048. (This was still past the 2040 final maturity of the refunded debt, but earlier than it would have been in the larger deal.) The City priced the deal on November 15. The following chart shows the spread between the yields on the three STSC tax-exempt series and a market index of municipal bonds. 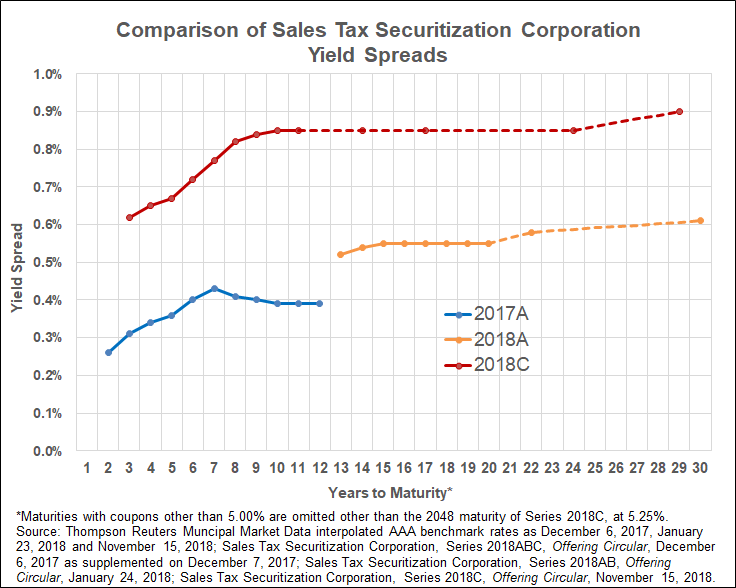 Due in part to the S&P downgrade, the spreads were higher on the most recent issuance compared with the series issued a year ago. Nevertheless, spreads were still significantly lower than the last General Obligation deal, which ranged from 3.54% to 3.94%.

The total effect of the three STSC deals is that the City has refunded $564.3 million of sales-tax backed bonds and $1.6 billion of General Obligation bonds, and has issued $2.0 billion in new debt. Approximately $1.16 billion is tax-exempt, and could be refunded after ten years for budgetary savings. The remaining $875 million is taxable and will likely remain outstanding until maturity. Annual debt service on the new bonds is $92.4 million for the next two fiscal years, then rises to $135.4 million two years later. The following chart shows a complete debt service schedule for all three transactions. 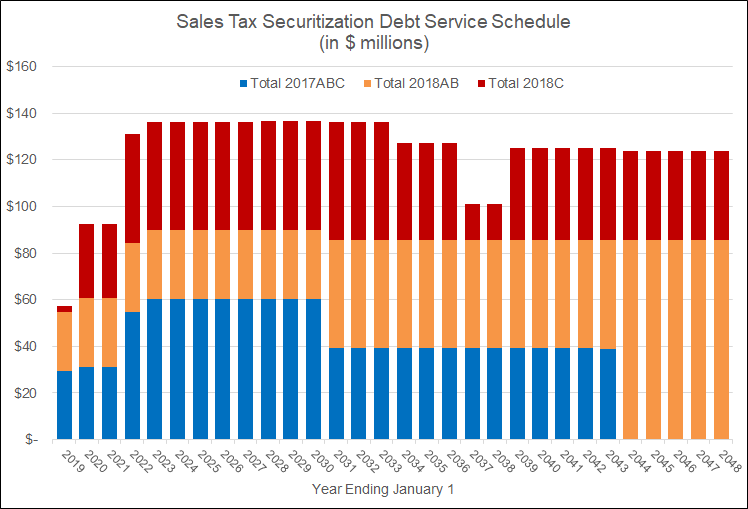 According to the offering document of the recent transaction, the STSC plans to issue another $600 million in January 2019. Additionally, the City may create a second bankruptcy-remote entity called the Dedicated Tax Securitization Corporation, which would lockbox other revenues received by the State. The new entity would issue debt to help fund the City’s four pension systems. The City had previously discussed issuing up to $10 billion in pension obligation bonds, and Mayor Rahm Emanuel is expected to give more details on his pension proposals on December 12.

UPDATE: This blog post has been corrected to reflect that Illinois municipalities other than Chicago have issued securitized debt under the Act, and that widening spreads are due in part to the S&P downgrade.